COVID-19 pandemic by country and territory

From Wikipedia
https://en.wikipedia.org/wiki/COVID-19_pandemic_by_country_and_territory
Data and maps, showing cases and deaths

This article provides a general overview and documents the status of locations affected by the severe acute respiratory syndrome coronavirus 2 (SARS-CoV-2), the virus which causes coronavirus disease 2019 ( COVID-19) and is responsible for the COVID-19 pandemic. The first human cases of COVID-19 were identified in Wuhan, the capital of the province of Hubei in China in December 2019.

Data is from the COVID-19 Data Repository by the Center for Systems Science and Engineering (CSSE) at Johns Hopkins University. [8]

Data for the map and graphs is from the COVID-19 Data Repository by the Center for Systems Science and Engineering (CSSE) at Johns Hopkins University. [8] Rolling 7-day average.

Data is collated by Our World in Data from figures that are verifiable based on public official sources. [16]

Logarithmic plot of confirmed cases from Our World in Data

A logarithmic plot of confirmed cases from Our World in Data using roughly the first 12-months of data from the pandemic. 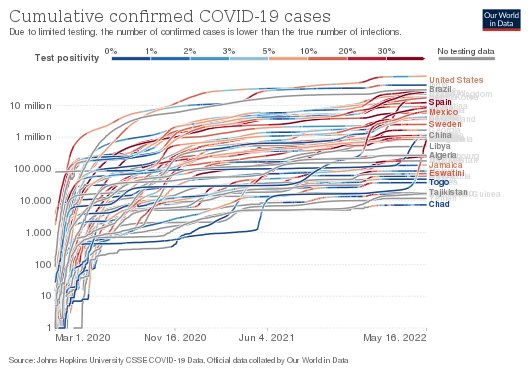 Cases and death rates are as reported by the Johns Hopkins University Coronavirus Resource Center (CRC). The figures may differ from those in the 'Total cases and deaths (mixed sources)' table above, which are based on a variety of sources. See COVID-19 pandemic death rates by country for an expanded table and more info.

The 2020 and 2021 tables below contain the cumulative number of monthly deaths from the pandemic of coronavirus disease 2019 ( COVID-19) reported by each country and territory to the World Health Organization (WHO) and published in the WHO's spreadsheets and tables updated daily. See COVID-19 pandemic deaths for expanded tables and more info.

Cases and deaths by region

Reporting standards vary enormously in different countries. No statistics are particularly accurate, but case and death rates in India (South Asia) and Sub-Saharan Africa in particular are probably much higher than reported. [374] [375]

As a result of COVID-19 many regions have imposed lockdowns, curfews and quarantines alongside new legislation and evacuations, or other restrictions for citizens of or recent travelers to the most affected areas. [379] Other regions have imposed global restrictions that apply to all foreign countries and territories, or prevent their own citizens from travelling overseas. [380] 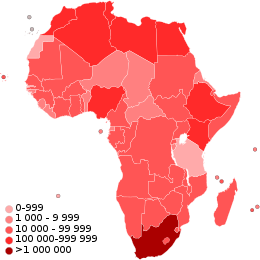 The pandemic was confirmed to have spread to Africa on 14 February 2020, with the first confirmed case announced in Egypt. [381] [382] The first confirmed case in sub-Saharan Africa was announced in Nigeria at the end of February 2020. [383] Within three months, the virus had spread throughout the continent, as Lesotho, the last African sovereign state to have remained free of the virus, reported a case on 13 May 2020. [384] [385] By 26 May, it appeared that most African countries were experiencing community transmission, although testing capacity was limited. [386] Most of the identified imported cases arrived from Europe and the United States rather than from China where the virus originated. [387]

In early June 2021, Africa faced a third wave of COVID infections with cases rising in 14 countries. [388] By 4 July the continent recorded more than 251,000 new Covid cases, a 20% increase from the prior week and a 12% increase from the January peak. More than sixteen African countries, including Malawi and Senegal, recorded an uptick in new cases. [389] The World Health Organization labelled it Africa's 'Worst Pandemic Week Ever'. [390]

The government of Egypt denied January 2021 allegations that the shortage of oxygen had killed several COVID-19 patients at one of its hospitals. However, an investigation led by The New York Times confirmed that the authorities had lied. The video of one of Egypt's hospitals treating critical patients using manual ventilation methods went viral on Facebook. The video was posted by Ahmed Nafei, the nephew of a 62-year-old woman who died. In addition, the relatives of the dead patients and the El Husseineya Central Hospital's medical staff also confirmed in an interview given to The New York Times that the cause of death had been the shortage of oxygen. [391] 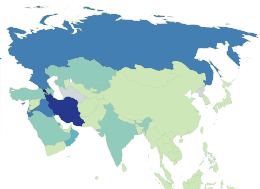 The COVID-19 pandemic began in Asia in Wuhan, Hubei, China, and has spread widely through the continent. As of 19 September 2021, [392] at least one case of COVID-19 had been reported in every country in Asia except North Korea and Turkmenistan.

The Asian countries with the highest numbers of confirmed coronavirus cases are India, Turkey, Iran, and Indonesia. [393] Despite being the first area of the world hit by the outbreak, the early wide-scale response of some Asian states, particularly Bhutan, [394] Singapore, [395] Taiwan [396] and Vietnam [397] has allowed them to fare comparatively well. China was criticised for initially minimising the severity of the outbreak, but its wide-scale response has largely contained the disease since March 2020. [398] [399] [400] [401]

As of July 2021, the highest numbers of deaths are recorded in India, Indonesia, Iran, and Turkey, each with more than 50,000 deaths and more than 600,000 deaths combined. However, the death tolls in a number of countries[ which?] are claimed to be significantly higher than those given in official figures. [402] [403] 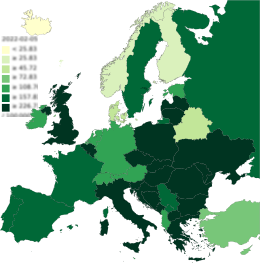 The first case in Europe was confirmed in Bordeaux, France, on 24 January 2020.

By 13 March 2020, when the number of reported new cases of COVID-19 became greater than those in China, the World Health Organization (WHO) began to consider Europe the active centre of the COVID-19 pandemic. [404] [405] By 22 May 2020, the WHO said that South America was now experiencing a worse outbreak. [406] 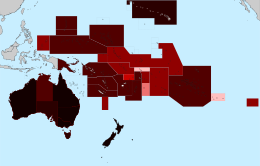 Confirmed cases in Oceania as of 31 July 2021
1–9 confirmed cases
10–99 confirmed cases
100–999 confirmed cases
1000–9999 confirmed cases
10,000+ confirmed cases
The pandemic was confirmed to have reached Oceania on 25 January 2020 with the first confirmed case reported in Melbourne, Australia. [416] It has since spread elsewhere in the region, [417] although many small Pacific island nations have thus far avoided the outbreak by closing their international borders. Three Oceania sovereign states (Nauru, Tonga, and Tuvalu) and one dependency ( Cook Islands) have yet to report a case. Australia and New Zealand were praised for their handling of the pandemic in comparison to other Western nations, with New Zealand and each state in Australia wiping out all community transmission of the virus several times even after re-introduction the community. [418] [419] [420] However, by August 2021, some Australian states had conceded defeat in their eradication efforts. 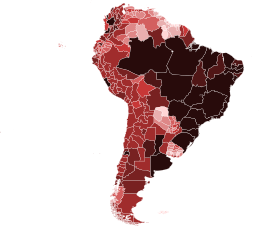 The pandemic was confirmed to have reached South America on 26 February 2020 when Brazil confirmed a case in São Paulo. [421] By 3 April, all countries and territories in South America had recorded at least one case. [422] 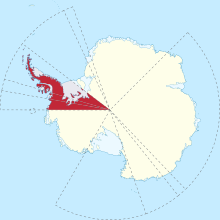 Territorial claims with confirmed cases (red) and deaths (black)
As of 31 December 2020
Due to its remoteness and sparse population, Antarctica was the last continent to have confirmed cases of COVID-19 and was one of the last regions of the world affected directly by the pandemic. [426] [427] [428] The first cases were reported in December 2020, almost a year after the first cases of COVID-19 were detected in China. At least 36 people are confirmed to have been infected. [429] 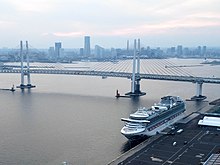 The COVID-19 pandemic spread to a number of cruise ships, with the nature of such ships – including crowded semi-enclosed areas, increased exposure to new environments, and limited medical resources – contributing to the heightened risk and rapid spread of the disease. [430]

The British-registered Diamond Princess was the first cruise ship to have a major outbreak on board, with the ship quarantined at Yokohama from 4 February 2020 for approximately one month. Of 3711 passengers and crew, around 700 people became infected and 9 people died. [431] [432]

The COVID-19 pandemic spread to many military ships. The nature of these ships, which includes working with others in small enclosed areas and a lack of private quarters for the vast majority of crew, contributed to the rapid spread of the disease, even more so than on cruise ships. [433] [434]

Due to the nature of operations security, national militaries may have policies in place that prevent or restrict reporting of SARS-CoV-2 infections and COVID-19 deaths, so although the cases listed below may have been widely reported in reliable sources, confirmation by official spokespeople of the respective militaries is not systematic. [435]

Timeline of first confirmed cases by country or territory