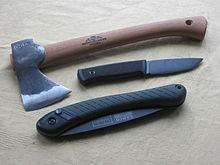 A hatchet, a knife, and sometimes a saw are staple tools for bushcraft.

A billhook (a common tool in Europe) with a saw blade, used as a bushcraft tool in France

Bushcraft is the use and practice of skills, acquiring and developing knowledge and understanding, in order to survive and thrive in a natural environment.

Bushcraft skills therefore provide for the basic physiological necessities for human life: food (through foraging, tracking, hunting, trapping, fishing), water sourcing and purification, shelter-building, and firecraft. These may be supplemented with expertise in twine-making, knots and lashings, wood-carving, campcraft, medicine/health, and natural navigation.

Bushcraft includes the knowledge to handle certain tools such as bushcraft knives and axes. A bushcrafter can use these tools to create many different types of constructions, from dugout canoes to a-frame shelters.

The term bushcraft was popularized in the Southern Hemisphere by Les Hiddins (the Bush Tucker Man) as well as in the Northern Hemisphere by Mors Kochanski and more recently gained considerable currency in the United Kingdom due to the popularity of Ray Mears and his bushcraft and survival television programs. [1] The origin of the phrase "bushcraft" comes from skills used in the bush country of Australia. Often the phrases "wilderness skills" or "woodcraft" are used as they describe skills used all over the world.[ citation needed] [2]

The Oxford English Dictionary definition of bushcraft is "skill in matters pertaining to life in the bush".

The word has been used in its current sense in Australia and South Africa at least as far back as the 1800s. Bush in this sense is probably a direct adoption of the Dutch 'bosch', (now 'bos') originally used in Dutch colonies for woodland and country covered with natural wood, but extended to usage in British colonies, applied to the uncleared or un-farmed districts, still in a state of nature. Later this was used by extension for the country as opposed to the town. In Southern Africa, we get Bushman from the Dutch 'boschjesman' applied by the Dutch colonists to the natives living in the bush. In North America, where there was also considerable colonisation by the Dutch, you have the word 'bushwacker' which is close to the Dutch 'bosch-wachter' (now 'boswachter') meaning 'forest-keeper' or 'forest ranger'.

Historically, the term has been spotted in the following books (amongst others):

The word bushcraft was trademarked by Bushcraft USA LLC. The application was submitted July 30, 2012 and issued November 12, 2013. This trademark is a service mark, for the general use of the word bushcraft and is not limited to electronic forms of communication or commerce. However, the validity of this TM is in question (nullified) since the Mark was used in commerce, by Mors Kochanski in 1981, 31 years prior and again in 1988, 24 years prior to Bushcraft USA making claim to the Mark.

Canadian wilderness instructor Mors Kochanski published the "Northern Bushcraft" book in 1981 and an expanded edition of the book in 1988. He has [5] stated on numerous occasions that book title was an explicit reference to Graves' work. [6]