The EE British Academy Film Awards or BAFTA Film Awards are presented in an annual award show hosted by the British Academy of Film and Television Arts (BAFTA) to honour the best British and international contributions to film. The ceremonies were initially held at the flagship Odeon cinema in Leicester Square in London, before being held at the Royal Opera House from 2008 to 2016. Since 2017, the ceremony has been held at the Royal Albert Hall in London.

The stated charitable purpose of BAFTA is to "support, develop and promote the art forms of the moving image, by identifying and rewarding excellence, inspiring practitioners, and benefiting the public". In addition to high-profile awards ceremonies, BAFTA runs a year-round programme of educational events, including film screenings and tribute evenings. BAFTA is supported by a membership of about 6,000 people from the film, television, and video game industries.

The Academy's awards are in the form of a theatrical mask designed by American sculptor Mitzi Cunliffe, in response to a commission from the Guild of Television Producers in 1955. 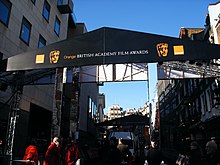 The location for the 2008 ceremony.

The ceremony previously took place in April or May, but since 2001 it has been held in February in order to precede the Academy Awards. Most of the awards are open to all nationalities, though there are awards for Outstanding British Film and Outstanding Debut by a British Writer, Producer or Director. Only UK films are eligible for the categories of The British Short Film and British Short Animation awards.

The Awards ceremony is delayed broadcast on British television the same evening, and across the world. The first broadcast was on the BBC in 1956. It has been broadcast in colour since 1970. In the United States it is shown on BBC America.

During each annual ceremony, BAFTA pauses in memoriam to pay tribute to those in the industry who have died over the past 12 months, showcasing a montage of images accompanied by music.

Until 2012, the mobile telephone network Orange sponsored the awards. Orange's parent company, EE, took over the sponsorship of the event from 2013.

In the category for Best Director, John Schlesinger, Roman Polanski, Woody Allen, Alan Parker, Louis Malle, Joel Coen, Peter Weir, Ang Lee, and Alfonso Cuarón tie for the most wins in this category, with two each. Martin Scorsese holds the record for most nominations, with ten (as of the 2020 nominations). Steven Soderbergh is the only director to receive two nominations in the same year (being nominated in 2000 for Traffic and Erin Brockovich).