From Wikipedia
https://en.wikipedia.org/wiki/Bramhall
For others, see Bramhall (disambiguation).
Human settlement in England

The Anglo-Saxon manor of Bramall was held as separate estates by two Saxon freemen, Brun and Hacun. [7] In 1070, William the Conqueror subdued the north-west of England, and divided the land among his followers. The manor was given to Hamon de Massey, who eventually became the first Baron of Dunham Massey. [8] The earliest reference to Bramall was recorded in the Domesday Book as "Bramale", a name derived from the Old English words brom meaning broom, both indigenous to the area, and halh meaning nook or secret place, probably by water. De Masci received the manor as wasteland, since it had been devastated by William the Conqueror. By the time of the Domesday survey, the land was recovering and cultivated again. [9]

In 1875, Bramhall was one of eight civil parishes of Cheshire to be included in the Stockport Rural rural sanitary district. The sanitary district became the Stockport Rural District in 1894. The parish was abolished in 1900 and its former area became part of the Hazel Grove and Bramhall civil parish and urban district. In 1974, the district was abolished, under the Local Government Act 1972, and transferred to Greater Manchester to be combined with that of other districts to form the Metropolitan Borough of Stockport. [10]

Bramhall is part of the parliamentary constituency of Cheadle, represented by Conservative Mary Robinson since 2015. 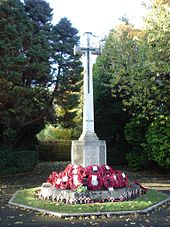 Bramall Hall, situated in 26 hectares (64 acres) of parkland, is an example of a 14th-century Cheshire building. In 2016 an extensive programme of restoration work was completed by a dedicated team. The Ladybrook flows through the park towards Cheadle and Bramall Hall.

The war memorial commemorates the deaths of 89 men killed in the two world wars. [11]

St Michael and All Angels' Church

The Church of England parish church of St Michael and All Angels [12] in Robins Lane was consecrated in 1911 when Bramhall Parish was created, although the building was not completed until 1963. It replaced an earlier mission church opened in 1890. [13]

Bramhall has a cricket club and there are three lawn tennis clubs (LTC): Bramhall Queensgate LTC, to the north; Bramhall Lane LTC, close to the village; and Bramhall Park LTC, close to the park. There are also two golf clubs in Bramhall, each with 18-hole courses: Bramhall Golf Club and Bramall Park Golf Club. Stockport RUFC in Bramhall has been host to Headlander Festival. There is a recreation centre linked with Bramhall High School with indoor and outdoor facilities.

Bramhall has a number of bars, restaurants, cafes, clothes shops, hairdressers, beauty salons, charity shops, churches and a library. Many of these are housed inside and around the village square, [14] although some shops along the main roads. There is also a recreation centre.

Bramhall's property market is dominated by detached and semi-detached properties with a small part being made up of terraced homes and flats. [15] Many of the region's footballers choose to live in the 'mansions of Alderley Edge, Prestbury, Bowdon, Bramhall and Hale', [16] highlighting Bramhall as a desirable suburban location.

Alongside numerous listed buildings, [17] the sixties and early seventies saw a growth in Bramhall's housing stock. New developments included the Parkside and New House Farm areas in the north of Bramhall and the Dairyground estate which features a co-operative, apartments and a care home. The Dairyground estate is served by Stagecoach Manchester [18] and is in close proximity to Bramhall railway station. Bramhall High School is situated in the Dairyground estate, which is part of the Bramhall North Ward. [19]

The area of Little Australia (so called as all the roads are named after towns in Australia) is bordered by the West Coast Main Line to the north, the Bramhall oil terminal to the east, Bramhall village centre to the west and Moorend Golf Club to the south. The longest road in Little Australia is Meadway, which starts in Bramhall shopping centre and runs through the heart of the estate for its entire length. Meadway has a number of shops, care homes and two large car parking facilities which are served by multiple CCTV cameras. There is also a recycling centre situated on the Meadway East car park. Lumb Lane park is located on the estate and consists of two football pitches, a small children's playground and a hard surface football/basketball court. Bramhall Village Hall is located on Lumb Lane. Queensgate Primary School is located on Albany Road. Little Australia is part of the Bramhall South Ward.