From Wikipedia
https://en.wikipedia.org/wiki/Bolshoi_Theatre
Historic ballet and opera theatre in Moscow, Russia, first opened in 1825
For other uses, see Bolshoi.
Not to be confused with Bolshoi Theatre, Saint Petersburg.

The Bolshoi Theatre (Russian: Большо́й теа́тр, tr. Bol'shoy teatr, literally "Big Theater", IPA:  [bɐlʲˈʂoj tʲɪˈatər]) is a historic theatre in Moscow, Russia, originally designed by architect Joseph Bové, which holds ballet and opera performances. [1] Before the October Revolution it was a part of the Imperial Theatres of the Russian Empire along with Maly Theatre (Small Theatre) in Moscow and a few theatres in Saint Petersburg ( Hermitage Theatre, Bolshoi (Kamenny) Theatre, later Mariinsky Theatre and others).

The Bolshoi Ballet and Bolshoi Opera are amongst the oldest and most renowned ballet and opera companies in the world. It is by far the world's biggest ballet company, with more than 200 dancers. [2] The theatre is the parent company of The Bolshoi Ballet Academy, a world-famous leading school of ballet. It has a branch at the Bolshoi Theater School in Joinville, Brazil. [3]

The main building of the theatre, rebuilt and renovated several times during its history, is a landmark of Moscow and Russia (its iconic neoclassical façade is depicted on the Russian 100-ruble banknote). On 28 October 2011, the Bolshoi re-opened after an extensive six-year renovation. [4] The official cost of the renovation is 21 billion rubles ($688 million). However, other Russian authorities and other people connected to it claimed much more public money was spent. [5] [6] The renovation included restoring acoustics to the original quality (which had been lost during the Soviet Era), as well as restoring the original Imperial decor of the Bolshoi. [4] 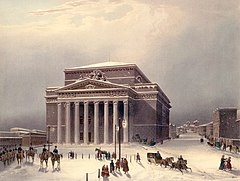 The old Bolshoi Theatre in the early 19th century

Bolshoi Theatre in 1883 after reconstruction by Alberto Cavos 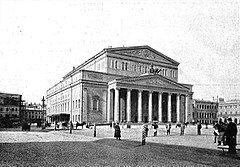 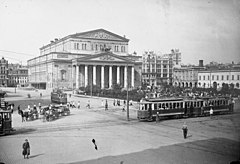 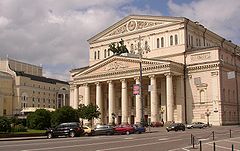 Bolshoi Theatre in 2006 before the renovation

The company was founded on 28 March [ O.S. 17 March] 1776, [7] when Catherine II granted Prince Peter Urusov a licence to organise theatrical performances, balls and other forms of entertainment. [8] Urusov set up the theatre in collaboration with English tightrope walker Michael Maddox. [9] Initially, it held performances in a private home, but it acquired the Petrovka Theatre and on 30 December 1780, it began producing plays and operas, thus establishing what would become the Bolshoi Theatre. Fire destroyed the Petrovka Theatre on 8 October 1805, and the New Arbat Imperial Theatre replaced it on 13 April 1808, however it also succumbed to fire during the French invasion of Moscow in 1812.

The first instance of the theatre was built between 1821 and 1824, designed and supervised to completion by architect Joseph Bové based upon an initial competition-winning design created by Petersburg-based Russian architect Andrei Mikhailov that was deemed too costly to complete. [10] [11] Bové also concurrently designed the nearby Maly Theatre and the surrounding Theater Square, The new building opened on 18 January 1825 as the Bolshoi Petrovsky Theatre with a performance of Fernando Sor's ballet, Cendrillon. Initially, it presented only Russian works, but foreign composers entered the repertoire around 1840.

Renovations in the 19th century

In 1843 a large-scale reconstruction of the theatre took place using a design by A. Nikitin, but a fire in 1853 caused extensive damage and so a further reconstruction was carried out, by Alberto Cavos, son of the opera composer Catterino Cavos. On 20 August 1856, the Bolshoi Theatre reopened. Other repairs of the building took place in 1896.

On 7 December 1919 the house was renamed the State Academic Bolshoi Theatre. Only a few days later, however, on 12 December, there was an unsuccessful attempt to shut the institution entirely. Beethoven Hall opened on 18 February 1921. Ivan Rerberg directed further reconstruction of the theatre between 1921 and 1923. A bomb damaged the structure during World War II, but this was promptly repaired.

A new stage for the Bolshoi Theatre, called the New Stage, went into service on 29 November 2002, constructed to the left of the theatre's historic main stage. Together with auxiliary buildings — a restored 17th-century building, two rehearsal halls, and artists' recreation rooms — it forms a single theatre complex, the Bolshoi Theatre of Russia. The new building is on a natural hill which it shared, until recently, blocks of old houses with communal apartments. [12] 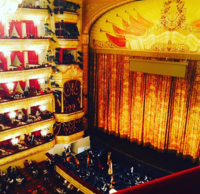 The curtain of the Bolshoi Theater

From July 2005 to October 2011 the theatre was closed for restoration. It had undergone many renovations in its time, but none as extensive. The building, whose architecture combines three different styles, was damaged and a quick renovation seemed to be necessary.

Repairs were initially estimated at 15 billion rubles ($610 million) but engineers found that more than 75% of the structure was unstable, [13] and as a result the cost estimate jumped to 25.5 billion rubles (app. $850 million). At the completion of the work, however, it was announced that only 21 billion rubles ($688 mil) had been spent. [14] According to The Moscow Times, the true cost may have been double that, [5] and Der Spiegel quotes a figure of $1.1 billion. [6] The rebuilding and renovation was funded entirely by the federal government. [15]

During the long period of reconstruction, the company continued to mount productions, with performances held on the New Stage and on the stage of the Great Kremlin Palace.

The renovation included an improvement in acoustics, to attempt to replicate the sound believed to have existed in pre-Soviet times, [16] and the restoration of the original Imperial decor. [4] The building's foundation and brickwork were thoroughly reset. Inside, the entire space was stripped from the bottom up. The 19th-century wooden fixtures, silver stage curtain and French-made red velvet banquettes were removed for repair in specialist workshops. Outside, on the top of the façade, the double-headed eagle of the original Russian coat of arms was installed in the place where the Soviet hammer and sickle had been mounted for decades.

Finally, on 28 October 2011, the Bolshoi Theatre re-opened with a concert featuring international artists and the ballet and opera companies. [4] The first staged opera, Ruslan and Lyudmila, followed soon after.

The Bolshoi has been the site of many historic premieres, including:

Theatrical scene. View from above 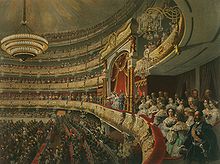 Performance in the Bolshoi Theatre (1856) 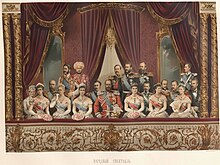 Alexander III of Russia and his family at the Bolshoi, 1883

The Bolshoi is a repertory theatre, meaning that it draws from a list of productions, any one of which may be performed on a given evening. It normally introduces two to four new ballet or opera productions each season and puts a similar number on hold. The sets and costumes for most productions are made in the Bolshoi's own workshops. The performers are drawn primarily from the Bolshoi's regular ballet and opera companies, with occasional guest performances. Since the dissolution of the Soviet Union, there have been a few attempts to reduce the theatre's traditional dependence on large state subsidies. Corporate sponsorship occurs for some productions, but state funding is still the lifeblood of the company.

The Bolshoi has been associated from its beginnings with ballet. Tchaikovsky's ballet Swan Lake premiered at the theatre on 4 March 1877. Other staples of the Bolshoi repertoire include Tchaikovsky's The Sleeping Beauty and The Nutcracker, Adam's Giselle, Prokofiev's Romeo and Juliet, and Khachaturian's Spartacus.

After the death of Joseph Stalin, the company toured internationally and became an important source of cultural prestige, as well as foreign currency earnings. As a result, the "Bolshoi Ballet" became a well-known name in the West. However, the Bolshoi suffered from losses through a series of defections of its dancers. The first occurrence was on 23 August 1979, with Alexander Godunov; [18] followed by Leonid Kozlov and Valentina Kozlova on 16 September 1979; and other cases in the following years. Bolshoi continues to tour regularly with opera and ballet productions in the post-Soviet era. [19] [20]

The opera company specializes in the classics of Russian opera such as Mussorgsky's Boris Godunov, Glinka's A Life for the Tsar, and Rimsky-Korsakov's The Tsar's Bride, as well as the operas of Tchaikovsky. Many operas by western composers are also performed, especially works of Italian composers such as Rossini, Verdi, and Puccini. Until the mid-1990s, most foreign operas were sung in Russian, but Italian and other languages have been heard more frequently on the Bolshoi stage in recent years.

Some operas, such as Borodin's Prince Igor, include extensive ballet sequences. Many productions, especially of classic Russian opera, are performed on a grand scale, with dozens of costumed singers and dancers on stage for crowd or festival scenes. 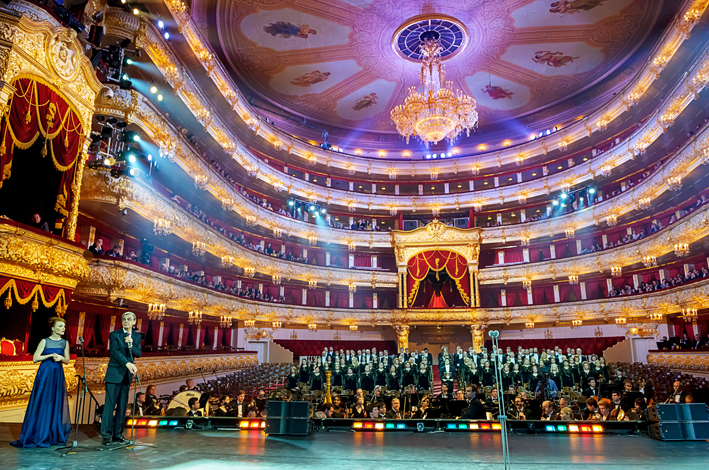 Auditorium of the Bolshoi Theatre in 2014 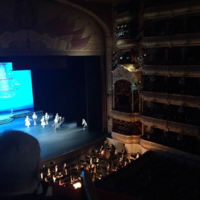 Orchestra of the Bolshoi Theater in the workplace 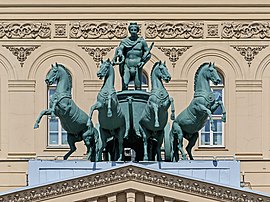 The Bolshoi Theatre is world-famous and attracts large numbers of tourists. As a result, prices can be much higher than in other Russian theatres. This is especially the case for ballet, where prices are comparable to those for performances in the West. For local citizens, concerts and operas are still relatively affordable, with prices ranging from 100 rubles (≈$1.5) (for students, for balcony seats for matinée performances) to 15,000 rubles (≈$230) (for seats in the orchestra or stalls).