From Wikipedia
https://en.wikipedia.org/wiki/Boat_lift
This article is about machines transporting boats between different bodies of water. For shipyard device to replace a dry dock, or Boat Lifts for pleasure craft storage, see Ship lift. For other uses, see Boat lift (disambiguation). 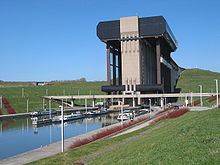 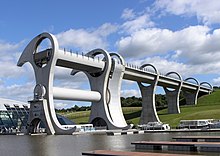 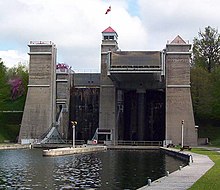 A boat lift, ship lift, or lift lock is a machine for transporting boats between water at two different elevations, and is an alternative to the canal lock.

It may be vertically moving, like the Anderton boat lift in England, rotational, like the Falkirk Wheel in Scotland, or operate on an inclined plane, like the Ronquières inclined plane in Belgium.

A precursor to the canal boat lift, able to move full-sized canal boats, was the tub boat lift used in mining, able to raise and lower the 2.5 ton tub boats then in use. An experimental system was in use on the Churprinz mining canal in Halsbrücke near Dresden. It lifted boats 7 m (23 ft) using a moveable hoist rather than caissons. The lift operated between 1789 and 1868, [1] and for a period of time after its opening engineer James Green reporting that five had been built between 1796 and 1830. He credited the invention to Dr James Anderson of Edinburgh. [2]

In 1796 an experimental balance lock was designed by James Fussell and constructed at Mells on the Dorset and Somerset Canal, though this project was never completed. [2] A similar design was used for lifts on the tub boat section of the Grand Western Canal entered into operation in 1835 becoming the first non-experimental boat lifts in Britain [4] and pre-dating the Anderton Boat Lift by 40 years.

In 1904 the Peterborough Lift Lock designed by Richard Birdsall Rogers opened in Canada. This 19.8-metre (65 ft) high lift system is operated by gravity alone, with the upper bay of the two bay system loaded with an additional 30 cm (12 in) of water as to give it greater weight.

Before the construction of the Three Gorges Dam Ship Lift, the highest boat lift, with a 73.15-metre (240.0 ft) height difference and European Class IV (1350 tonne) capacity, was the Strépy-Thieu boat lift in Belgium opened in 2002.

The boat lift at Longtan is reported to be even higher in total with a maximum vertical lift of 179 m (587 ft) in two stages when completed. [5]