From Wikipedia
(Redirected from Blue Marble)
https://en.wikipedia.org/wiki/Blue_Marble
Photograph of Earth taken by the crew of the Apollo 17 mission
"Blue Marble" redirects here. For other uses, see Blue Marble (disambiguation).

It mainly shows the Earth from the Mediterranean Sea to Antarctica. This was the first time the Apollo trajectory made it possible to photograph the south polar ice cap, despite the Southern Hemisphere being heavily covered in clouds. In addition to the Arabian Peninsula and Madagascar, almost the entire coastline of Africa is clearly visible. The Asian mainland is on the horizon.

NASA has also applied the name to a 2012 series of images which cover the entire globe at relatively high resolution. These were created by looking through satellite pictures taken over time in order to find as many cloudless photographs as possible to use in the final images.

The photograph, taken on December 7, 1972, [7] at 05:39 a.m. EST (10:39 UTC),[ better source needed] is one of the most widely distributed photographic images in existence. [5] The image is one of the few to show an almost fully illuminated Earth as the astronauts had the Sun behind them when they took the image. To the astronauts, the slightly gibbous Earth had the appearance and size of a glass marble, hence the name. It has been mostly shown with Antarctica at the bottom, although the actual view the astronauts had was with Antarctica on top. 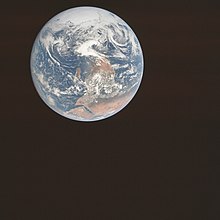 AS17-148-22727, from which The Blue Marble was cropped. The photograph's original orientation had south pointed up. [8]

The idea for the photograph was conceived by Stewart Brand during an LSD trip, when seeing a "psychedelic illusion" of the Earth's curvature convinced him that a picture of the entire planet would change how humans related to it. [9] [10] He then campaigned to have NASA release the then-rumored satellite image of the entire Earth as seen from space. He sold and distributed buttons for 25 cents each [11] that asked: "Why haven't we seen a photograph of the whole Earth yet?" [12] During this campaign, Brand met Richard Buckminster Fuller, who offered to help Brand with his project. [13] Several of the pins made their way to NASA employees. [10]

The photograph was taken about 5 hours 6 minutes after launch of the Apollo 17 mission, [8] and about 1 hour 54 minutes after the spacecraft left its parking orbit around Earth to begin its trajectory to the Moon. [14] The time of Apollo 17's launch, 12:33 a.m. EST, meant that Africa was in daylight during the early hours of the spacecraft's flight. With the December solstice approaching, Antarctica was also illuminated.

The 1972 Tamil Nadu cyclone can be seen in the bottom left of the image. This storm had brought flooding and high winds to the Indian state of Tamil Nadu on December 5, two days before the photograph was taken. [15]

The photographer used a 70-millimeter Hasselblad camera with an 80-millimeter Zeiss lens. [19] [20] NASA credits the image to the entire Apollo 17 crew— Gene Cernan, Ronald Evans and Harrison Schmitt—all of whom took photographs during the mission with the on-board Hasselblad, although evidence examined after the mission suggests that Schmitt was the photographer. [5]

All Apollo flights were heavily scheduled down to the minute. At the time this photo was taken, none of the astronauts was scheduled to do so. Thus this photo was taken quickly in a stolen moment. The astronaut who took the picture was weightless, and the continents were hard to see, and he took the photo quickly, which explains the photo's orientation, compared to the north up orientation of most maps. [8]

Apollo 17 was the last crewed lunar mission. No human since has been far enough from Earth to photograph a whole-Earth image [4] such as The Blue Marble, but whole-Earth images have been taken by many uncrewed spacecraft missions. [21]

The Blue Marble was not the first clear image taken of an illuminated face of Earth, since similar shots from the ATS-3 satellite had already been made as early as 1967. [22] The Apollo 17 image, however, released during a surge in environmental activism during the 1970s, became a symbol of the environmental movement, as a depiction of Earth's frailty, vulnerability, and isolation amid the vast expanse of space. [4] NASA archivist Mike Gentry has speculated that The Blue Marble is among the most widely distributed images in history. [5]

Subsequent similar images of Earth (including composites at much higher resolution) have also been termed Blue Marble images, and the phrase "blue marble" (as well as the picture itself) is frequently used, as in the Earth flag by environmental activist organizations or companies attempting to promote an environmentally conscious image. There has also been a children's television program called Big Blue Marble. Poet-diplomat Abhay Kumar penned an Earth anthem inspired by the Blue Marble which contains "all the peoples and the nations of the world, one for all, all for one, united we unfurl the blue marble flag". [23][ better source needed]

Blue Marble composite images generated by NASA in 2001 and 2002.

In 2002, NASA released an extensive set of satellite-captured imagery, including prepared images suitable for direct human viewing, as well as complete sets suitable for use in preparing further works. [25] At the time, 1 km/pixel was the most detailed imagery available for free, and permitted for reuse [26] without a need for extensive preparatory work to eliminate cloud cover and conceal missing data, or to parse specialized data formats. The data also included a similarly manually assembled cloud-cover and night-lights image sets, at lower resolutions.

A subsequent release was made in 2005, named Blue Marble Next Generation. [27] This series of digital image mosaics was produced with the aid of automated image-sifting upon images from NASA's Earth Observatory, which enabled the inclusion of a complete, cloud-free globe for each month from January to December 2004, at even higher resolution (500 m/pixel). [28] The original release of a single-image set covering the entire globe could not reflect the extent of seasonal snow-and-vegetative cover across both hemispheres, but this newer release closely modeled the changes of the seasons.

A number of interactive viewers for these data have also been released, among them a music visualization for the PlayStation 3 that is based on the texture data. [28] [29] 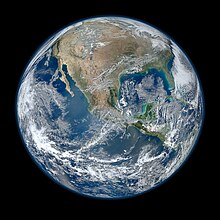 The picture is composed of data obtained by the Visible/Infrared Imager Radiometer Suite (VIIRS) instrument on board the Suomi NPP satellite on January 4, 2012. [31] [32] The data was obtained from six orbits of the Earth by the Suomi NPP over an eight-hour period. [31] The image was created using a near-sided perspective projection with the viewing point placed 2100 km above 20° North by 100° West. This projection results in a very wide-angle presentation such as one might get with a fish-eye lens, and it does not include the whole hemisphere. 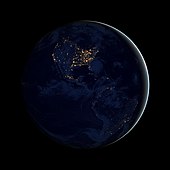 Black Marble – North and South America at night, [33] Hurricane Sandy can be seen off the coast of Florida.

On December 5, 2012, NASA released a nighttime view of Earth called Black Marble [33] during an annual meeting of Earth scientists held by the American Geophysical Union in San Francisco. [34] The images display all the human and natural matter that glows and can be detected from space. [35] The data was acquired by the Suomi NPP satellite in April and October 2012 and then mapped over existing Blue Marble imagery of Earth to provide a realistic view of the planet. [36] The Suomi NPP satellite completed 312 orbits and gathered 2.5 terabytes of data to get a clear shot of every parcel of the Earth's land surface. Named for satellite meteorology pioneer Verner Suomi, the satellite flies over any given point on Earth's surface twice each day and flies 512 miles (824 km) above the surface in a polar orbit. [37]

The nighttime views were obtained with the new satellite's "day-night band" of the Visible Infrared Imaging Radiometer Suite (VIIRS), which detects light in a range of wavelengths from green to near-infrared, and uses filtering techniques to observe dim signals such as city lights, gas flares, auroras, wildfires, and reflected moonlight. Auroras, fires, and other stray light have been removed in the case of the Black Marble images to emphasize the city lights. [36] The images have been used to study the spatial distribution of economic activity, to select sites for astronomical observatories, and to monitor human activities around protected areas. [36]

The Moon moving in front of Earth in July 2016, as seen by the DSCOVR satellite. The far side of the Moon faces the camera.

On July 21, 2015, NASA released a new Blue Marble photograph taken by a U.S. Deep Space Climate Observatory (DSCOVR), a solar weather and Earth observation satellite that was launched in February 2015 and will provide a near-continuous view of the entire sunlit-side of the Earth. The image was taken on July 6, 2015. [38] The photograph, of the Western Hemisphere, is centered over Central America. The Western United States, Mexico and the Caribbean are visible, but much of South America is hidden beneath cloud cover. Greenland can be seen at the upper edge of the image.

The EPIC science team plans to upload 13 new color images per day on their website. The color balance has been adjusted to approximate an image that could be seen with the average human eye. In addition to images, scientific information will be uploaded as it becomes available after in-flight calibration is complete. The science information will be ozone and aerosol amounts, cloud reflectivity, cloud height, and vegetation information. The EPIC instrument views the Earth from sunrise in the west to sunset in the east 12 to 13 times per day as the Earth rotates at 15 degrees of longitude per hour. Clearly visible are storms forming over the Atlantic and Pacific Oceans, major slowly moving "cloud rivers", dust aerosol plumes from Africa, the sun's reflection in the oceans, ship exhaust tracks in the clouds, rivers and lakes, and the variegated land surface patterns especially in the African deserts. The spatial resolution of the color images is about 10 km, and the resolution of the science products will be about 20 km. Once every three months, lunar images are obtained that are the same as those viewed from Earth during our full Moon. On occasion, the other side of the Moon will appear in the Earth images as the Moon crosses in front of the Earth.