Plympton was born in Portland, Oregon, the son of Wilda Jean (Jerman) and Donald F. Plympton, [3] [4] and was raised on a farm in nearby Oregon City [1] with five siblings: Sally, Tia, Peggy, David and Peter. [4] From 1964 to 1968, he studied Graphic Design at Portland State University, where he was a member of the film society and worked on the yearbook. In 1968, he transferred to the School of Visual Arts [3] in New York City, where he majored in cartooning. He graduated from SVA in 1969. [5]

Plympton's illustrations and cartoons have been published in The New York Times and the weekly newspaper The Village Voice, as well as in the magazines Vogue, Rolling Stone, Vanity Fair, Penthouse, and National Lampoon. His political cartoon strip Plympton, which began in 1975 in the SoHo Weekly News, eventually was syndicated and appeared in over 20 newspapers. [6]

In 1988, his animated short Your Face was nominated for the Academy Award for Best Animated Short Film. He also became known for other animated short films, including 25 Ways to Quit Smoking (1989) and Enemies (1991), the latter of which was part of the Animania series on MTV, where many of his other shorts were shown. [7]

In 1991, Plympton won the Prix Spécial du Jury at the Cannes Film Festival for Push Comes to Shove which was featured on MTV's animated series Liquid Television. [8] In 1992, his self-financed, first feature-length animated film, The Tune debuted at the Sundance Film Festival. [7] His work also appeared on the 1992–1993 Fox comedy series The Edge. In 1993, he made his first live action film, J. Lyle. 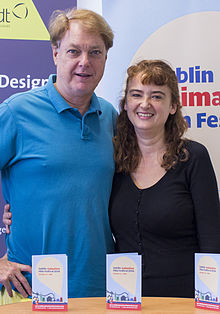 Bill and Sandrine Plympton in 2014

In 1995, he contributed animation and graphics to a computer game collection, Take Your Best Shot. [9] He also published a comic book in 2003, The Sleazy Cartoons of Bill Plympton.

The actress Martha Plimpton, a distant relative of his, [10] served as associate producer on Plympton's animated feature Hair High (2004), doing much of the casting. The movie's voice cast included her father Keith Carradine and her uncle David Carradine.

Guard Dog (2004) was also nominated for the Academy Award for Best Animated Short Film. In 2005, Plympton animated a music video for Kanye West's " Heard 'Em Say" and the following year, he created the music video for "Weird Al" Yankovic's " Don't Download This Song". Plympton contributed animation to the 2006 History Channel series 10 Days That Unexpectedly Changed America, to illustrate the events of Shays' Rebellion. Together with other independent New York City animators, he has released two DVDs of animated shorts, both titled Avoid Eye Contact.

In 2011, Alexia Anastasio completed a documentary on Plympton's life, Adventures In Plymptoons!, [14] released in September 2012 direct-to-DVD and on video-on-demand. [15]

Plympton directed the segment "On Eating and Drinking" in the 2014 animated film The Prophet, adapted from Kahlil Gibran's book The Prophet. In 2018, Plympton created a series of videos for The New York Times called “Trump Bites”. One of the series, Trump and Putin: A Love Story, depicts Trump and Putin kissing half-naked. Critics said the video implied that gay relationships were inherently comical and immoral. [17]

In 2020, Plympton released a Kickstarter for his new animated comedy western, Slide. The funding was successful and Plympton plans on finishing the film by 2021.

A collection of more than 180 Plympton items is held at the Academy Film Archive. [18] The archive has preserved Plympton's films such as Your Face, The Tune, Guard Dog, and The Cow Who Wanted to Be a Hamburger. [19]

Plympton has stated he has many influences, the biggest being the work of the Walt Disney studio with others including Tex Avery, Bob Clampett, Robert Crumb, Milton Glaser, Charles Addams, Roland Topor, Quentin Tarantino, Frank Capra, Richard Lester, Bob Godfrey, Saul Steinberg, Tomi Ungerer, Jacques Tati, [27] Milt Kahl, [28] Carlos Nine, and Jules Feiffer. [29] He said I Married a Strange Person! "was influenced by Peter Jackson, some of his earlier films ... where he used gore and violence and blood as humor." [30]