A Batak Toba man from Samosir with a hoe over his shoulders, pre-1939.

Toba people (also referred to as Batak Toba people or often simply "Batak") are the most numerous of the Batak people of North Sumatra, Indonesia, and often considered the classical 'Batak', most likely to willingly self-identify as Batak. The Toba people are found in Toba Samosir Regency, Humbang Hasundutan Regency, Samosir Regency, North Tapanuli Regency, part of Dairi Regency, Central Tapanuli Regency, Sibolga and its surrounding regions. [3] The Batak Toba people speak in the Toba Batak language and are centered on Lake Toba and Samosir Island within the lake. Batak Toba people frequently build in traditional Batak architecture styles which are common on Samosir. Cultural demonstrations, performances and festivities such as Sigale Gale are often held for tourists.

Paleontological research done in Humbang region of the west side of Toba Lake suggests that human activity had existed 6,500 years ago, much earlier than the 800 years existence of King of Batak; and therefore the name "King of Toba" was coined for the early settlers of that region. This discovery also led to the theory of the possibility that the King of Toba could have originated from south India, Indochina ( Thailand, Burma, Vietnam, Cambodia and Formosa), South China and so on, even as far as the Ten Lost Tribes of Israel. [4] 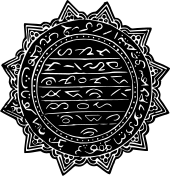 The seal of Sisingamangaraja dynasty. 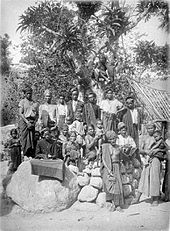 During the Japanese occupation of the Dutch East Indies, the administration of the Tapanuli Residency had little changes.

After the independence, the government of Indonesia retain Tapanuli as Residency. Dr. Ferdinand Lumban Tobing became the first Tapanuli Resident.

Although there were changes made to the name, but the division of the region was still the same. For example, the name of Afdeling Bataklanden was changed to Luhak Tanah Batak and the first luhak (federated region) appointed was Cornelius Sihombing; who was once also a demang (chief) silindung. The title Onderafdeling (in Dutch language means, subdivision) is also changed to urung, and demangs that supervises onderafdeling are promoted as kepala (head) urung. Onderdistrik (subdistrict) then became urung kecil, and is supervised by kepala urung kecil; which was previously known as assistant demang.

Just as it was in the past, the government of the Tapanuli Residency were divided into four districts, namely:-

Transfer of sovereignty in early 1950

Toba head with his family in their home with beautifully carved head of Toba family (adathuis) Tapanoeli, North Sumatra, circa 1900.

During the transfer of sovereignty in early 1950s, the Tapanuli Residency that was unified into North Sumatra province were divided into four new regencies, namely:-

In December 2008, the Tapanuli Residency was unified under North Sumatra province. At the moment, Toba is under the Toba Samosir Regency's region with Balige as its capital.

The Toba people practices a distinct culture. It is not a must for Toba people to live in Toba region, although their origin is from Toba. Just as it is with other ethnicities, the Toba people have also migrated to other places to look for better life. For example, majority of the Silindung natives are the Hutabarat, Panggabean, Simorangkir, Hutagalung, Hutapea and Lumbantobing clans. Instead all those six clans are actually descendants of Guru Mangaloksa, one of Raja Hasibuan's sons from Toba region. So it is with the Nasution clan where most of them live in Padangsidimpuan, surely share a common ancestor with their relative, the Siahaan clan in Balige. It is certain that the Toba people as a distinct culture can be found beyond the boundaries of their geographical origins. The region of Toba, known as "the king of Batak" is precisely Sianjur village situated on the slopes of Mount Pusuk Buhit, about 45 minutes drive from Pangururan, the capital of Samosir Regency today.

The traditional house of the Toba people is called Rumah Bolon. It is a rectangular building that can house up to five or six families. One can enter a Rumah Bolon through a staircase in the middle of the house with odd numbers of steps (odd number of staircase means offspring of slave, even number of staircase means offspring of king). When a person enters the house, one must bow in order to avoid one's head from knocking the transverse beam at the entrance of the traditional house. The interpretation of this is that the guests must respect the owner of the house.

A Solu on lake Toba.

Traditional boat of Toba Batak people is called solu, it is a dugout canoe, with boards added on the side bound with iron tacks. They are propelled by sitting rowers, who sit in pairs on cross seats. [6]

The Batak Toba are known throughout Indonesia as capable musicians, and are perceived as confident, outspoken and willing to question authority, expressing differences in order to resolve them through discussion. This outlook on life is contrasted to Javanese people, Indonesia's largest ethnic group, who are more culturally conciliatory and less willing to air differences publicly. [7]

Before getting to know Christianity, the old belief of the Toba Batak tribe was Parmalim. In parmalim teachings, God is referred to as Debata Mula Jadi Nabolon, which means God is great. However, currently most of the Toba Batak people embrace Protestant Christianity, both Protestant and Catholic with majority are Protestant. [2] Some of them are Muslim, and a few still adhere to the Parmalim belief, currently the number is approximately 5,000 people. [8]

The first Protestant missionaries who tried to reach the Batak highlands of inner Northern Sumatra were English and American Baptist preachers in the 1820s and 1830s but without any success. After Franz Wilhelm Junghuhn and Herman Neubronner van der Tuuk did intensive research on Batak language and culture in the 1840s, a new attempt was done in 1861 by several missionaries sent out by the German Rhenish Missionary Society (RMG). The first Bataks were baptized during this year. In 1864, Ludwig Ingwer Nommensen from the German Rhenish Missionary Society reached the Batak region and founded a village called "Huta Dame" (village of peace) in the district of Tapanuli in Tarutung, North Sumatra. [9]

Batak Christian Protestant Church (Huria Kristen Batak Protestan (HKBP)) is the largest Protestant church in Indonesia, the original church of the Toba Batak tribe. From the HKBP church, other Protestant churches were born, according to ethnicity and language, especially in the province of North Sumatra. Such as GKPS for the Simalungun tribe using the Simalungun language and GKPA for the Angkola tribe and Mandailing using the Angkola language. While the Catholic church, in general, still uses the Indonesian language.