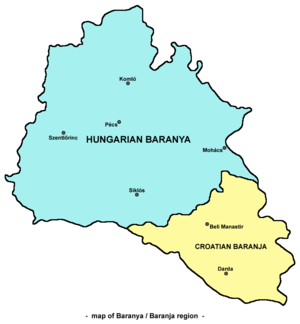 Map of the Baranya region

Baranya or Baranja ( Hungarian: Baranya, pronounced  [ˈbɒrɒɲɒ]; German: Branau; Croatian: Baranja, pronounced  [bǎraɲa]) is a geographical and historical region between the Danube and the Drava rivers. Its territory is divided between Hungary and Croatia. In Hungary, the region is included into Baranya county, while in Croatia, it is included into Osijek-Baranja county. 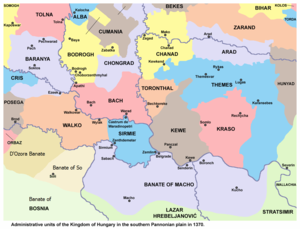 Baranya County in the 14th century

In the 16th century, the Ottoman Empire captured Baranya, and included it into the sanjak of Mohács, an Ottoman administrative unit, with the seat in the town of Mohaç. Later sanjak of Peçuy was created from northwestern part of Mohaç Sanjak. After the Ottoman rule was established in that area coming population from Bosnia. [1] In the end of the 17th century, Baranya was captured by the Habsburg Monarchy, and was included into restored Baranya County within the Habsburg Kingdom of Hungary. Croats moved from Bosnia into Slavonia and Baranja en masse after the Ottoman retreat, and this population is today known as the Šokci. [2]

In 1918, the entire region was captured by Serbian troops and was administered by the newly created Kingdom of Serbs, Croats and Slovenes (later known as Yugoslavia). For a short time (in 1918-1919), Baranya was part of Banat, Bačka and Baranja region, which was governed by the People's Administration from Novi Sad. By the Treaty of Trianon (part of the Versailles peace) in 1920, the Baranya region was formally divided between Hungary and the Yugoslavia, but de facto remained under the administration of the latter until 1921. On August 14, 1921, the Serb-Hungarian Baranya-Baja Republic was proclaimed. It included northern parts of Baranya and Bačka regions, which were assigned to Hungary by the treaty. On August 21–25, 1921, the Republic was abolished and its territory was included into Hungary, as was previously decided by the Treaty of Trianon. The northern part of Baranya in Hungary was included into Baranya county. 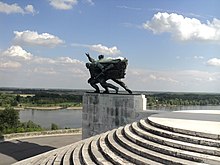 The southern (Yugoslav) part of the region was part of Novi Sad county between 1918 and 1922, part of Bačka Oblast between 1922 and 1929, and in 1929 it was included into the Danube Banovina, a province of the Kingdom of Yugoslavia. In 1941, the Yugoslav Baranya was occupied by Hungary, but it was returned to Yugoslavia in 1944. In 1944-1945, Yugoslav Baranya was part of the Autonomous Province of Vojvodina, while in 1945 it was assigned to the People's Republic of Croatia.

During the Croatian War of Independence in 1991 it came under control of the self-proclaimed SAO Eastern Slavonia, Baranja and Western Srem, which became part of the unrecognized self-declared Republic of Serbian Krajina. After the war ended (in 1995), it was peacefully integrated into Croatia in 1998, by the Erdut Agreement. According to the agreement, it was administered by the administration of the United Nations from 1996 to 1998, when it was returned to full sovereignty of Croatia. Today, it is part of that republic's Osijek-Baranja county.

Baranya is divided between Hungary and Croatia with the majority of the region lying in Hungary. The Hungarian portion of the region coextensive with Baranya County, while in Croatia, it comprises only part of Osijek-Baranja County. Contemporary Hungarian usage of Baranya usually refers only to the Hungarian section while the terms Drávaköz and Drávaszög (" Drava corner") are used for Croatian Baranja. 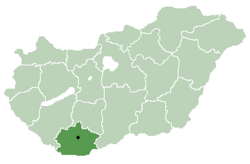 Some of the important cities and towns in Hungarian Baranya (with population figures from 2001 census): 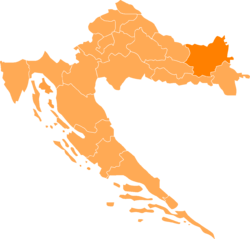 Municipalities in Croatian Baranja (with population figures from 2001 census): [3]