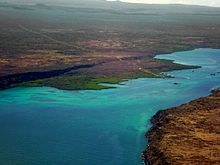 The Itabaca channel between Baltra Island on the right and Santa Cruz on the left, as seen from a departing aircraft

Baltra Island ( Spanish: Isla Baltra), is a small island of the Galápagos Islands. Also known as South Seymour (named after Lord Hugh Seymour), Baltra is a small flat island located near the center of the Galápagos. It was created by geological uplift. The island is very arid and vegetation consists of salt bushes, prickly pear cactus and palo santo trees.

The ultimate origin of the name "Baltra" for the island is unknown. " Baltra" is a Spanish surname (particularly Chilean), so it is presumably named after a person. The name is first found in print in the 1927 edition of the South America Pilot by the British Admiralty; it was added after the 1915 edition, but the document explaining the source has been lost. [1] The name is sometimes incorrectly believed to be an acronym used by the US military, though the term predates the US base.

During World War II, Baltra was established as a United States Army Air Force base. Crews stationed at Baltra patrolled the eastern Pacific for enemy submarines and protected the Panama Canal.

After the war, the facilities were given to the government of Ecuador. Today the island continues as an official Ecuadorian military base. The foundations of buildings and other remains of the US base including the old airfield can still be seen on the island.

On arriving at Baltra, all visitors are transported by bus to one of two docks. The first dock is located in a small bay where the boats cruising the Galápagos await passengers. The second is a ferry dock, which connects Baltra to the island of Santa Cruz via the Itabaca Channel.

Constructions for a larger, modernized airport began in 2011, and as of early 2013 it has started operation and the old buildings are being dismantled. The new airport is being run under a 15-year concession by ECOGAL, a subsidiary of the Argentinian group Corporación América [2] and has been promoted as "the first ecological airport worldwide" [3] due to its reduced energy consumption for lighting and ventilation, rainwater recovery, waste recycling, etc.

Baltra is currently not within the boundaries of the Galápagos National Park. The Galápagos land iguana is the subject of an active re-introduction campaign on the island; they became extinct on Baltra in 1954. However, in the early 1930s, Captain G. Allan Hancock had translocated a population of Galápagos land iguanas from Baltra to North Seymour Island, a smaller island just a few hundred meters north of Baltra. The iguanas survived and became the breeding stock for the successful Charles Research Station captive breeding program. During the 1980s, iguanas from North Seymour were brought to the Darwin Research Station as part of this project, and, in the 1990s, land iguanas were reintroduced to Baltra. As of 1997, scientists counted 97 iguanas living on strict Baltra, 13 of which were born on the islands. It is not uncommon to see iguanas either crossing the main road or on the runway at the airport.