Arthur H. Robinson (January 5, 1915 – October 10, 2004) was an American geographer and cartographer, [1] who was professor in the Geography Department at the University of Wisconsin–Madison from 1947 until he retired in 1980. He was a prolific writer and influential philosopher on cartography, and one of his most notable accomplishments is the Robinson projection of 1961.

Arthur H. Robinson was born in Montreal, Quebec, Canada, to American parents, James Howard Robinson and Elizabeth (Peavey) Robinson. He lived in Great Britain while he was young, and received his post-secondary education in the United States. His undergraduate work was done at Miami University in Oxford, Ohio, obtaining a B.A. degree in 1936. During his undergraduate work he became especially interested in cartography, and received some practice drawing maps for faculty textbooks [2] while earning a master's degree in geography from the University of Wisconsin–Madison in 1938, and he earned his Ph.D. degree from Ohio State University in 1947. [3] While at Ohio State, Robinson worked to solve problems in the Map communication model.

During World War II, Robinson served as director of the map division of the Office of Strategic Services (OSS). In 1941, when Robinson joined OSS, there were no cartographers as we know them today. Robinson engaged geographers with some interest in mapping and the group developed their techniques on the job. [4] Led by Robinson, the OSS cartographers designed a massive 50-inch globe for President Franklin Roosevelt, which became known as "The President's Globe." [5] A copy of the globe was given to Winston Churchill as a gift and a third globe was provided for the use of George Marshall and Henry Stimson. [6] While serving with the OSS, Robinson oversaw the creation of 5,000 hand-drawn maps and attended the Allied conferences at Quebec and Cairo in 1943 and in 1944, he served as chief U.S. map officer. For his efforts Robinson received the Legion of Merit from the United States Army in 1946. [7] 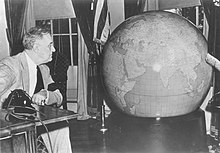 In 1947 Robinson subsequently joined the geography department at the University of Wisconsin–Madison, where he spent his career in academia and research. Robinson sought to establish cartography as a recognized discipline and ultimately the university granted both undergraduate and master's degrees in cartography. [4] The Wisconsin cartography program has conferred more than 100 masters and 20 doctoral degrees, and many of the doctoral recipients created respected cartography programs at other universities. [8] Today the map library at the University of Wisconsin–Madison is named in his honor. [9]

Detail of the cartouche on "The President's Globe"

Robinson married Mary Elizabeth Coffin (1910–-1992), daughter of John R. Coffin and Bessie Morris Coffin, on December 23, 1938, in Franklin County, Ohio. They had two children, a son and a daughter. After the death of his first wife, Robinson remarried in 1993. His second wife was Martha Elizabeth Rodabaugh Phillips (1914–2010), a widow, with whom he had attended school in Oxford, Ohio.

Robinson was a prolific writer and influential philosopher on cartography: [7] According to Robinson,“the aim of cartographic design is to present the geographical data in such a fashion that the map, as a whole, appears as an integrated unit and so that each item included is clear, legible, and neither more nor less prominent than it should be.” [10] Like Richard Edes Harrison, another successful wartime cartographer, Robinson warned against the dangers of blindly accepting conventions in map design, such as always putting north at the top of the map. Robinson wrote that neither logic nor educational value required placing north at the top of the map. [11]

The Robinson projection is an example of a pseudocylindrical projection.

One of Robinson's most notable accomplishments is the Robinson projection. In 1961, Rand McNally asked Robinson to choose a projection for use as a world map that, among other criteria, was uninterrupted, [13] had limited distortion, and was pleasing to the eye of general viewers. [14] Robinson could not find a projection that satisfied the criteria, so Rand McNally commissioned him to design one.

Robinson proceeded through an iterative process to create a pseudo-cylindrical projection that intends to strike a compromise between distortions in areas and in distances, in order to attain a more natural visualization. The projection has been widely used since its introduction. In 1988, National Geographic adopted it for their world maps but replaced it in 1998 with the Winkel tripel projection.

Robinson produced over 60 articles for professional publications, as well as fifteen books and monographs. [7] Books: