From Wikipedia
https://en.wikipedia.org/wiki/Arthropleura
Extinct genus of many-legged arthropods
Not to be confused with Anthopleura.

Arthropleura ( Greek for jointed ribs) is a genus of extinct millipede arthropods that lived in what is now northeastern North America and Scotland around 345 to 295 million years ago, from the Viséan stage of the lower Carboniferous Period to the Asselian stage of the lower Permian Period. [2] The species of the genus are the largest known land invertebrates of all time, and would have had few, if any, predators.

Size compared to a human

Arthropleura ranged in length from only about 0.3 metres long to A. armata which was 2.5 metres long. [3] Arthropleura was able to grow larger than modern arthropods, partly because of the greater partial pressure of oxygen in Earth's atmosphere at that time and because of the lack of large terrestrial vertebrate predators. [4]

The flattened body of Arthropleura was composed of approximately 30 jointed segments, each of which was covered by two side plates and one center plate. The ratio of pairs of legs to body segments was approximately 8:6, similar to some present-day millipedes. [5] 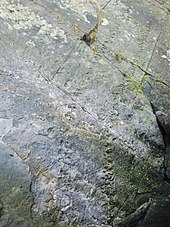 Fossil footprints of Arthropleura, Laggan Harbour, Isle of Arran, Scotland. This trail is the type specimen of the ichnospecies Diplichnites cuithensis.

For a very long time,[ vague] Arthropleura was believed to be an active predator and frequently portrayed as a gigantic version of the tropical centipede genus Scolopendra.[ citation needed] It is now known that Arthropleura was not a predator like modern centipedes, but an herbivorous arthropod like modern millipedes. Because none of the known fossils have the mouth preserved, scientists have concluded that Arthropleura did not have strongly sclerotized and powerful mouth parts, because these would have been preserved at least in some of the fossils. Some fossils have been found with lycopod fragments and pteridophyte spores in the gut and in associated coprolites. [6]

Fossilized footprints from Arthropleura have been found in many places. These appear as long, parallel rows of small prints, which show that it moved quickly across the forest floor, swerving to avoid obstacles, such as trees and rocks. Its tracks have the ichnotaxon name Diplichnites cuithensis. [7] [8] Tracks from Arthropleura up to 50 cm wide have been found at Joggins, Nova Scotia. [9]