From Wikipedia
https://en.wikipedia.org/wiki/Armando_Manzanero
In this Spanish name, the first or paternal surname is Manzanero and the second or maternal family name is Canché.
Mexican singer-songwriter and composer (1935–2020)
Musical artist

Armando Manzanero Canché (December 7, 1935 – December 28, 2020) was a Mexican Mayan musician, singer, composer, actor and music producer, widely considered the premier Mexican romantic composer of the postwar era and one of the most successful composers of Latin America. [1] He received a Grammy Lifetime Achievement Award in the United States in 2014. He was the president of the Mexican Society of Authors and Composers (Sociedad de Autores y Compositores de México). [2]

Manzanero was born in Ticul, Yucatán on 7 December 1935. [3] His father was singer and composer Santiago Manzanero and his mother Juanita Canché Baqueiro played the jarana jarocha. [4] At the age of eight he was introduced to the world of music at the Escuela de Bellas Artes (School of Fine Arts) of his native city, later furthering his musical studies in Mexico City.

In 1950, at the age of fifteen, he composed his first melody titled Nunca en el Mundo (Never in the World), of which twenty-one versions in different languages have been recorded to date. [5] The following year he began his professional career as a pianist.

In 1957 he was signed as musical director by the Mexican branch of CBS International and as Musical Promoter for EMI, [6] becoming the next year the pianist of Latin American artists such as Pedro Vargas, Lucho Gatica and Raphael. [5]

In 1959, an executive of RCA Victor urged him to record his first album of love songs, which he named Mi Primera Grabación (My First Record). [6]

In 1965 he won first place at the Festival de la Canción (Song Festival) in Miami with the song Cuando Estoy Contigo (When I'm With You). [7]

In 1970, his song " Somos Novios" was reissued with new lyrics by Sid Wayne, composer for Elvis Presley. The English version, "It's Impossible", was performed by Perry Como and was nominated for a Grammy. 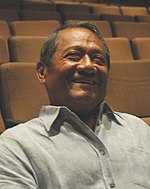 In 1978 he won first place at the Mallorca Festival in Spain, with the song Señor Amor (Mister Love). In 1982, the song Corazón Amigo (Heart Friend), was honored at the Yamaha Festival. In 1993 Billboard magazine gave him an award for his excellent musical career. [8]

In 2011, Manzanero became President of and one of the main directors of the Asociación Nacional de Autores y Compositores (Mexican National Association of Authors and Composers). He also served as Vice President of the association from 1982 through 2011. His work in defense of copyright laws has strengthened this organization and has given it international acclaim. [9]

Manzanero composed more than four hundred songs, fifty of which have given him international fame[ clarification needed]. He participated in numerous radio and television shows, recorded more than thirty albums, and composed the musical scores of several[ vague] movies. During the fifty years of his musical career, Manzanero gave performances all over Latin America, particularly in São Paulo (Brazil), Buenos Aires (Argentina), El Metropolitan (Mexico), the Teresa Carreño Theater of Caracas (Venezuela), Madison Square Garden (New York), and many other cities in Europe and Asia. [7]

His most famous songs include Voy a apagar la luz (I'm Going to Turn Off the Lights), Contigo Aprendí ( With you I Learned... ), Adoro (I Adore), No sé tú (I don't know if you...), Por Debajo de la Mesa (Underneath the Table) Esta Tarde Vi Llover (English version "Yesterday I Heard the Rain"), Somos Novios (English version "It's Impossible"), Felicidad (Happiness) and Nada Personal (Nothing Personal).[ citation needed]

Some of his melodies have also been recorded by jazz artists, like Bill Evans, Abbey Lincoln, Tete Montoliu.

On December 17, 2020, Manzanero was hospitalized in Mexico City after being diagnosed with COVID-19 during the COVID-19 pandemic in Mexico. [10] Manzanero died eleven days later from the virus, aged 85 on December 28, 2020, twenty one days after his birthday. [3] His body was cremated and his ashes were transferred to Mérida, in Yucatán where he was born and where there is a house museum in his honor.