Arizona is a dramatic play written in 1899 by Augustus Thomas, considered one of his best. The play takes place in the Arizona Territory before the Spanish–American War of 1898.

The Territory became the U.S. state of Arizona in 1912.

Arizona tells the story of the affection between a young cavalryman and a rancher's daughter. The cavalryman is accused of stealing books from the library that contained a hidden key to the chancellor's office. Sub-plots include indiscretions of the young wife of an older cavalry officer, a cavalry officer who will not support his illegitimate child, and the love between a vaquero and the daughter of a German cavalry sergeant.[ citation needed] Thomas based his play on his visits to Henry Hooker's Sierra Bonita Ranch and the two primary characters Canby and Bonita on Hooker's family. [1]

The play is set just before the Spanish–American War and at Aravaipa Ranch, in the Aravaipa Valley near Fort Grant, Arizona.

Evening, the interior of the adobe courtyard of Canby's ranch house.

Twenty minutes later, the interior of the adobe courtyard of Canby's ranch house. 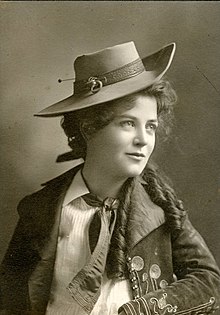 Grace Elliston as Bonita Canby during the 1902 run of Arizona

in parenthesis, cast of the Broadway premiere of the play Sept. 10, 1900, Herald Square Theater [2]

The play was produced by Kirke La Shelle and opened in Chicago at Hamlin's Grand Opera House on June 12, 1899. With a cast led by Theodore Roberts, [3] sets and costumes designed by Frederic Remington, [4] and authentic characterization of the soldiers and citizens of Arizona Territory, it was received enthusiastically by the audience. [5] The Chicago opening also featured a young Lionel Barrymore in a minor role as Lieutenant Young of the Eleventh Cavalry. [3] Sigmund Romberg later adapted the play as an operetta, The Love Call (1927)..