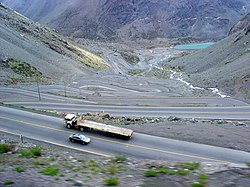 Road in the border area between Santiago and Mendoza.

The ArgentinaŌĆōChile border is the longest international border of South America and the third longest in the world after the CanadaŌĆōUnited States border and the KazakhstanŌĆōRussia border. With a length of 5,308 kilometres (3,298  mi), [1] it separates Argentina from Chile along the Andes and on the islands of Tierra del Fuego. However, there are some border disputes, particularly around the Southern Patagonian Ice Field.

This map shows the current border in the Southern Patagonian Ice Field, the B Section is pending to be defined.

The northern end of the border is a tripoint it forms with those at the ArgentinaŌĆōBolivia border and the Bolivia-Chile border in Atacama desert. It extends south to the Strait of Magellan and ends on Isla Grande de Tierra del Fuego. It separates the island into two to its coast a few kilometers southwest of Ushuaia.

In November 1984 the southern border area was finally established[ clarification needed] after long negotiations and mediation of John Paul II by the Treaty of Peace and Friendship of 1984 between Chile and Argentina, a perpetual treaty, signed at the Vatican by representatives of both countries.

The city of Mendoza, in Argentina, is one of the largest cities located near the border.