From Wikipedia
https://en.wikipedia.org/wiki/Arabian_Sea
Marginal sea of the northern Indian Ocean between the Arabian Peninsula and India 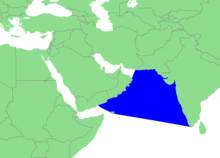 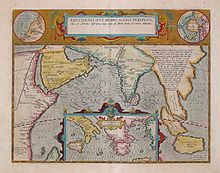 17th century map depicting the locations of the Periplus of the Erythraean Sea.

Arabian Sea as seen from space.

The Arabian Sea ( Arabic: بحر العرب‎ Bahr al-Arab) is a region of the northern Indian Ocean bounded on the north by Pakistan, Iran, and the Gulf of Oman, on the west by the Gulf of Aden, Guardafui Channel and the Arabian Peninsula, on the southeast by the Laccadive Sea, [1] on the southwest by the Somali Sea, [2] and on the east by India. Its total area is 3,862,000 km2 (1,491,000 sq mi) and its maximum depth is 4,652 meters (15,262 ft). The Gulf of Aden in the west connects the Arabian Sea to the Red Sea through the strait of Bab-el-Mandeb, and the Gulf of Oman is in the northwest, connecting it to the Persian Gulf. 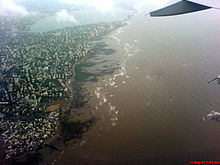 The Arabian Sea in Bombay/Mumbai, India

The Arabian Sea has two important branches — the Gulf of Aden in the southwest, connecting with the Red Sea through the strait of Bab-el-Mandeb; and the Gulf of Oman to the northwest, connecting with the Persian Gulf. There are also the gulfs of Khambhat and Kutch on the Indian Coast. The Arabian Sea has been crossed by many important marine trade routes since the 3rd or 2nd millennium BCE. Major seaports include Kandla Port, Mundra Port, Pipavav Port, Dahej Port, Hazira Port, Mumbai Port, Nhava Sheva Port (Navi Mumbai), Mormugão Port (Goa), New Mangalore Port and Kochi Port in India, the Port of Karachi, Port Qasim, and the Gwadar Port in Pakistan, Chabahar Port in Iran and the Port of Salalah in Salalah, Oman. The largest islands in the Arabian Sea include Socotra ( Yemen), Masirah Island (Oman), Lakshadweep (India) and Astola Island (Pakistan). The countries with coastlines on the Arabian Sea are Yemen, Oman, Pakistan, Iran, India and the Maldives. [3]

The International Hydrographic Organization defines the limits of the Arabian Sea as follows: [4]

The Arabian Sea historically and geographically has been referred to with different names by Arabian and European geographers and travelers, including Erythraean Sea Indian Sea, Oman sea, [7] Erythraean , Persian Sea in para No 34-35 of the Voyage [8] In Indian folklore, it is referred to as Darya, Sindhu Sagar, and Arab Samudra. [9] [10] [11]

Arab geographers, sailors and nomads used to call this sea by different names, including the Akhzar (Green) Sea, Bahre Fars (Persian Sea), the Ocean Sea, the Hindu sea, the Makran Sea, the sea of Oman, among them the Zakariya al-Qazwini, Al-Masudi, Ibn Hawqal and ( Hafiz-i Abru) They wrote: "The green sea and Indian sea and Persian sea are all one sea and in this sea there are strange creatures." in Iran and Turky people call it Oman sea. [12] In the Periplus of the Erythraean Sea , as well as in some ancient maps, Erythraean Sea refers to the whole area of the northwestern Indian Ocean, including the Arabian Sea. [13] 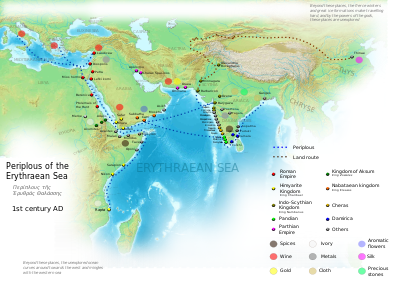 Names, routes and locations of the Periplus of the Erythraean Sea.

The Arabian Sea has been an important marine trade route since the era of the coastal sailing vessels from possibly as early as the 3rd millennium BCE, certainly the late 2nd millennium BCE through the later days known as the Age of Sail. By the time of Julius Caesar, several well-established combined land-sea trade routes depended upon water transport through the sea around the rough inland terrain features to its north.

These routes usually began in the Far East or down river from Madhya Pradesh, India with transshipment via historic Bharuch (Bharakuccha), traversed past the inhospitable coast of modern-day Iran, then split around Hadhramaut, Yemen into two streams north into the Gulf of Aden and thence into the Levant, or south into Alexandria via Red Sea ports such as Axum. Each major route involved transhipping to pack animal caravan, travel through desert country and risk of bandits and extortionate tolls by local potentates.

This southern coastal route past the rough country in the southern Arabian Peninsula was significant, and the Egyptian Pharaohs built several shallow canals to service the trade, one more or less along the route of today's Suez Canal, and another from the Red Sea to the Nile River, both shallow works that were swallowed up by huge sand storms in antiquity. Later the kingdom of Axum arose in Ethiopia to rule a mercantile empire rooted in the trade with Europe via Alexandria. [14]

The Kochi Port located on the south-west coast of India is the nearest Indian port to the international shipping routes, as well as one of the largest and busiest ports serving the Arabian Sea. Seen here is the International Container Transshipment Terminal, the only such facility in India.

The Port of Karachi, Pakistan's largest and busiest seaport lies on the coast of the sea. It is located between the Karachi towns of Kiamari and Saddar.

The Gwadar Port of Pakistan is a warm-water, deep-sea port situated at Gwadar in Balochistan at the apex of the Arabian Sea and at the entrance of the Persian Gulf, about 460 km west of Karachi and approximately 75 km (47 mi) east of Pakistan's border with Iran. The port is located on the eastern bay of a natural hammerhead-shaped peninsula jutting out into the Arabian Sea from the coastline.

Port of Salalah in Salalah, Oman is also a major port in the area. The International Task Force often uses the port as a base. There is a significant number of warships of all nations coming in and out of the port, which makes it a very safe bubble. The port handled just under 3.5m teu in 2009. [17]

The summer, when off-shore winds from Somaliland causes storms and shipping decrease as the result of them. 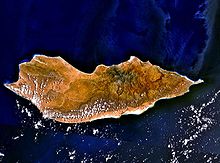 Landsat view of Socotra, an island of Yemen.

There are several islands in the Arabian Sea, with the most important ones being Lakshadweep Islands (India), Socotra (Yemen), Masirah (Oman) and Astola Island (Pakistan).

The Lakshadweep Islands (formerly known as the Laccadive, Minicoy, and Aminidivi Islands) is a group of islands in the Laccadive Sea region of Arabian Sea, 200 to 440 km (120 to 270 mi) off the southwestern coast of India. The archipelago is a union territory and is governed by the Union Government of India. The islands form the smallest union territory of India with their total surface area being just 32 km2 (12 sq mi). The islands are the northernmost of the Lakshadweep-Maldives-Chagos group of islands.

Astola Island, also known as Jezira Haft Talar in Balochi, or 'Island of the Seven Hills', is a small, uninhabited island in the northern tip of the Arabian Sea in Pakistan's territorial waters.

Socotra, also spelled Soqotra, is the largest island, being part of a small archipelago of four islands. It lies some 240 km (150 mi) east of the Horn of Africa and 380 km (240 mi) south of the Arabian Peninsula.

Masirah is an island off the east coast of Oman.

Phytoplankton bloom over the Arabian Sea in winter (NASA)

The Arabian Sea has one of the world's three largest oceanic oxygen minimum zones (OMZ), or “dead zones,” along with the eastern tropical North Pacific and the eastern tropical South Pacific. OMZs have very low levels of oxygen, sometimes undetectable by standard equipment. [18] The Arabian Sea's OMZ has the lowest levels of oxygen in the world, especially in the Gulf of Oman. [19] Causes of the OMZ may include untreated sewage as well as high temperatures on the Indian subcontinent, which increase winds blowing towards India, bringing up nutrients and reducing oxygen in the Arabian Sea's waters. In winter, phytoplankton suited to low-oxygen conditions turn the OMZ bright green. [20]

The wildlife of the Arabian sea is diverse, and entirely unique because of the geographic distribution.

A rail tunnel under the sea is planned. It will link the UAE with the western coast of India. The tunnel will be supported by pontoons and will be nearly 2000 kilometres in length. [21] [22]