Each planet orbiting the Sun follows an elliptic orbit that gradually rotates over time (apsidal precession). This figure illustrates positive apsidal precession (advance of the perihelion), with the orbital axis turning in the same direction as the planet's orbital motion. The eccentricity of this ellipse and the precession rate of the orbit are exaggerated for visualization. Most orbits in the Solar System have a much lower eccentricity and precess at a much slower rate, making them nearly circular and stationary. 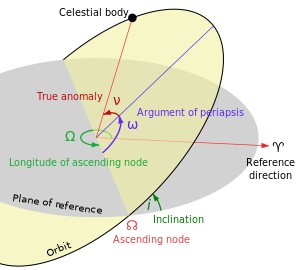 The main orbital elements (or parameters). The line of apsides is shown in blue, and denoted by ω. The apsidal precession is the rate of change of ω through time, dω/dt.

In celestial mechanics, apsidal precession (or apsidal advance) [1] is the precession (gradual rotation) of the line connecting the apsides (line of apsides) of an astronomical body's orbit. The apsides are the orbital points closest (periapsis) and farthest (apoapsis) from its primary body. The apsidal precession is the first time derivative of the argument of periapsis, one of the six main orbital elements of an orbit. Apsidal precession is considered positive when the orbit's axis rotates in the same direction as the orbital motion. An apsidal period is the time interval required for an orbit to precess through 360°. [2]

The ancient Greek astronomer Hipparchos noted the apsidal precession of the Moon's orbit; [3] it is corrected for in the Antikythera Mechanism (circa 80 BCE) with the very accurate value of 8.88 years per full cycle, correct to within 0.34% of current measurements. [4] The precession of the solar apsides was discovered in the eleventh century by al-Zarqālī. [5] The lunar apsidal precession was not accounted for in Claudius Ptolemy's Almagest, and as a group these precessions, the result of a plethora of phenomena, remained difficult to account for until the 20th century when the last unidentified part of Mercury's precession was precisely explained.

A variety of factors can lead to periastron precession such as general relativity, stellar quadrupole moments, mutual star–planet tidal deformations, and perturbations from other planets. [6]

For Mercury, the perihelion precession rate due to general relativistic effects is 43″ ( arcseconds) per century. By comparison, the precession due to perturbations from the other planets in the Solar System is 532″ per century, whereas the oblateness of the Sun (quadrupole moment) causes a negligible contribution of 0.025″ per century. [7] [8]

From classical mechanics, if stars and planets are considered to be purely spherical masses, then they will obey a simple 1/r2 inverse-square law, relating force to distance and hence execute closed elliptical orbits according to Bertrand's theorem. Non-spherical mass effects are caused by the application of external potential(s): the centrifugal potential of spinning bodies like the spinning of pizza dough causes flattening between the poles and the gravity of a nearby mass raises tidal bulges. Rotational and net tidal bulges create gravitational quadrupole fields (1/r3) that lead to orbital precession.

Total apsidal precession for isolated very hot Jupiters is, considering only lowest order effects, and broadly in order of importance

with planetary tidal bulge being the dominant term, exceeding the effects of general relativity and the stellar quadrupole by more than an order of magnitude. The good resulting approximation of the tidal bulge is useful for understanding the interiors of such planets. For the shortest-period planets, the planetary interior induces precession of a few degrees per year. It is up to 19.9° per year for WASP-12b. [9] [10]

Newton derived an early theorem which attempted to explain apsidal precession. This theorem is historically notable, but it was never widely used and it proposed forces which have been found not to exist, making the theorem invalid. This theorem of revolving orbits remained largely unknown and undeveloped for over three centuries until 1995. [11] Newton proposed that variations in the angular motion of a particle can be accounted for by the addition of a force that varies as the inverse cube of distance, without affecting the radial motion of a particle.[ citation needed] Using a forerunner of the Taylor series, Newton generalized his theorem to all force laws provided that the deviations from circular orbits are small, which is valid for most planets in the Solar System.[ citation needed]. However, his theorem did not account for the apsidal precession of the Moon without giving up the inverse-square law of Newton's law of universal gravitation. Additionally, the rate of apsidal precession calculated via Newton's theorem of revolving orbits is not as accurate as it is for newer methods such as by perturbation theory.[ citation needed] 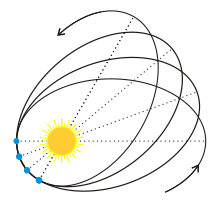 change in orbit over time

Effects of apsidal precession on the seasons with the eccentricity and ap/peri-helion in the orbit exaggerated for ease of viewing. The seasons shown are in the northern hemisphere and the seasons will be reverse in the southern hemisphere at any given time during orbit. Some climatic effects follow chiefly due to the prevalence of more oceans in the Southern Hemisphere.

An apsidal precession of the planet Mercury was noted by Urbain Le Verrier in the mid-19th century and accounted for by Einstein's general theory of relativity.

where c is the speed of light. [12] In the case of Mercury, half of the greater axis is about 5.79×1010 m, the eccentricity of its orbit is 0.206 and the period of revolution 87.97 days or 7.6×106 s. From these and the speed of light (which is ~3×108 m/s), it can be calculated that the apsidal precession during one period of revolution is ε = 5.028×10−7 radians (2.88×10−5 degrees or 0.104″). In one hundred years, Mercury makes approximately 415 revolutions around the Sun, and thus in that time, the apsidal perihelion due to relativistic effects is approximately 43″, which corresponds almost exactly to the previously unexplained part of the measured value.

This interaction between the anomalistic and tropical cycle is important in the long-term climate variations on Earth, called the Milankovitch cycles. An equivalent is also known on Mars.

The figure to the right illustrates the effects of precession on the northern hemisphere seasons, relative to perihelion and aphelion. Notice that the areas swept during a specific season changes through time. Orbital mechanics require that the length of the seasons be proportional to the swept areas of the seasonal quadrants, so when the orbital eccentricity is extreme, the seasons on the far side of the orbit may be substantially longer in duration.