Detail of Gustavianum in Uppsala, showing the cupola housing the anatomical theatre from 1663

Anatomical theatre in the Archiginnasio of Bologna, constructed in 1637

The theatre was usually a room of roughly amphitheatrical shape, in the centre of which would stand the table on which the dissections of human or animal bodies took place. Around this table were several circular, elliptic or octagonal tiers with railings, steeply tiered so that students or other observers could stand and get a good view of the dissection almost from above and unencumbered by the spectators in the rows in front. It was common to display skeletons at some place in the theatre.

The first anatomical Theatre was built at the University of Padua in 1594 and is still preserved. Other early examples include the Theatrum Anatomicum of Leiden University, built in 1596 and reconstructed in 1988, and the Anatomical Theatre of the Archiginnasio in Bologna (whose building dates from 1563 and the anatomical theatre from 1637). 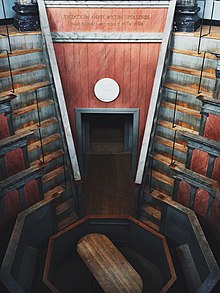 The anatomical theatre in Gustavianum in Uppsala. (1663)

The anatomical theatre completed in 1663 by medical professor and amateur architect Olaus Rudbeck for the University of Uppsala is located in the idiosyncratic cupola which Rudbeck placed on top of the Gustavianum building, at the time the main building of the university. Rudbeck had spent time in Leiden, and both the anatomical theatre and the botanical garden he founded in Uppsala in 1655 were influenced by his experiences there. Today Gustavianum is open for the public under the name Museum Gustavianum.

Thomas Jefferson built an anatomical theatre for the University of Virginia. It was completed in 1827 but demolished in 1939 after the construction of Alderman Library nearby.