From Wikipedia
https://en.wikipedia.org/wiki/Anatomical_terms_of_neuroanatomy
Terminology used to describe the central and peripheral nervous systems

This article describes anatomical terminology that is used to describe the central and peripheral nervous systems - including the brain, brainstem, spinal cord, and nerves.

Neuroanatomy, like other aspects of anatomy, uses specific terminology to describe anatomical structures. This terminology helps ensure that a structure is described accurately, with minimal ambiguity. Terms also help ensure that structures are described consistently, depending on their structure or function. Terms are often derived from Latin and Greek, and like other areas of anatomy are generally standardised based on internationally accepted lexicons such as Terminologia Anatomica.

To help with consistency, humans and other species are assumed when described to be in standard anatomical position, with the body standing erect and facing observer, arms at sides, palms forward.

Anatomical terms of location depend on the location and species that is being described.

To understand the terms used for anatomical localisation, consider an animal with a straight CNS, such as a fish or lizard. In such animals the terms " rostral", " caudal", "ventral" and "dorsal" mean respectively towards the rostrum, towards the tail, towards the belly and towards the back. For a full discussion of those terms, see anatomical terms of location.

Some terms are used more commonly in neuroanatomy, particularly:

The anatomical axes of orientation of the human brain are at odds with the anatomical axes of the human body in the standard anatomical position.
Red axis shows how the head bent forward as the back pointed upwards:
c: Caudal
r: Rostral
Yellow axes show the conventions for naming directions in the brain itself:
c: Caudal (though not tail direction),
d: Dorsal
r: Rostral (effectively unchanged)
v: Ventral (though not belly direction) 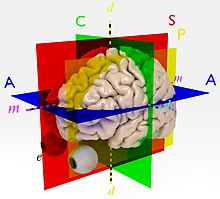 Standard anatomical planes and anatomical axes are used to describe structures in animals. In humans and many other primates the axis of the central nervous system is not straight, but bent to allow for forward vision when the body is vertical. This means that differences in terminology are needed to reflect the differences between the brains of primates and the brains of nearly all other vertebrates. For example, to describe the human brain, "rostral" still means "towards the beak or snout (Latin rostrum)", or at any rate, the interior of the cranial cavity just behind the face. "Caudal" means "towards the tail (Latin cauda"), but not "towards the back of the cranial cavity", which is "posterior" (behind, in ordinary motion). The rostro-caudal axis of the human central nervous system (magenta in the diagram) makes a near 90° bend at the level of the midbrain and continues through the brain-stem and spinal cord. In human anatomy, the occipital lobes and the back of the head are posterior but not caudal to the frontal lobes and the face.

"Superior" and "inferior" are adjectives from human anatomy, respectively meaning towards to top of the head or the soles of the feet when standing. The brain is superior to the spinal cord in people, but in quadrupeds the brain is anterior (forward in motion) to the spinal cord.

"Dorsal" means "in the direction away from the ridge of the human back or its equivalent in other animals. In human neuroanatomy the word is somewhat distorted, becoming synonymous with "superior" in the forebrain. i.e. in the direction of the roof of the cranial cavity"cranial cavity and thence to the body. "Ventral" in the central nervous system also refers to the rostro-caudal axis, which changes within the head.

These three axes of the human brain match the three planes within which they lie, even though the terms for the planes have not been changed from the terms for the bodily planes. The most commonly used reference planes are:

Specific terms are used for peripheral nerves that originate from, or arrive at, a specific point.

An efferent nerve fiber is one that arrives at the present point. For example, a cortical efferent is a fibre coming from elsewhere, and arriving to the cortex. Note that that is the opposite of the direction in which the nerve fibre conducts signals.

Specific terms are also used to describe the route of a nerve or nerve fibre:

A chiasm (from Greek ' Chi') is used to describe different types of crossings of or within peripheral nerve fibres between the cerebral hemispheres. The major example in the human brain is the Optic chiasm.

A decussation (from Latin 'from 'deca', 10, which is written as a capital X') refers to nerve fibers that cross the sagittal plane from one side of the central nervous system to the other, and connect different brain regions. There are two kinds:

A ganglion can also have the form of crossing nerves, but a ganglion always contains synapses between neurons as well as their cell bodies. The other kinds of nerve crossings never contain synapses of cell bodies of neurons.

The difference between a chiasm and a decussation is that the first refers to peripheral nerves whereas the latter refers to crossings inside central nervous system. A commissure connects the same brain region of each side whereas a decussation connects different brain regions. 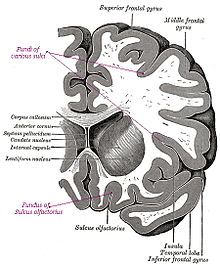 Image of the human brain showing sulci, gyri, and fundi shown in a Coronal section.

Specific terms are used to represent the gross anatomy of the brain:

A gyrus is an outward folding of the brain, for example the precentral gyrus. A sulcus is an inward fold, or valley in the brain's surface - for example the central sulcus. Additional terms used to describe these may include:

A fissure is used to describe: