Alexander Murray Palmer Haley (August 11, 1921 – February 10, 1992) [1] was an American writer and the author of the 1976 book Roots: The Saga of an American Family. ABC adapted the book as a television miniseries of the same name and aired it in 1977 to a record-breaking audience of 130 million viewers. In the United States, the book and miniseries raised the public awareness of black American history and inspired a broad interest in genealogy and family history. [3]

Haley's first book was The Autobiography of Malcolm X, published in 1965, a collaboration through numerous lengthy interviews with Malcolm X. [4] [5] [6]

He was working on a second family history novel at his death. Haley had requested that David Stevens, a screenwriter, complete it; the book was published as Queen: The Story of an American Family. It was adapted as a miniseries, Alex Haley's Queen, broadcast in 1993.

Alex Haley was born in Ithaca, New York, on August 11, 1921, and was the eldest of three brothers (the other two being George and Julius) and a half-sister (from his father's second marriage). Haley lived with his family in Henning, Tennessee, before returning to Ithaca with his family when he was five years old. Haley's father was Simon Haley, a professor of agriculture at Alabama A&M University, and his mother was Bertha George Haley (née Palmer), who had grown up in Henning. The family had Mandinka, other African, Cherokee, Scottish, and Scottish-Irish roots. [7] [8] [9] [10] The younger Haley always spoke proudly of his father and the obstacles of racism he had overcome.

Like his father, Alex Haley was enrolled at age 15 in Alcorn State University, a historically black college in Mississippi and, a year later, enrolled at Elizabeth City State College, also historically black, in Elizabeth City, North Carolina. The following year, he withdrew from college. His father felt that Alex needed discipline and growth, and convinced him to enlist in the military when he turned 18. On May 24, 1939, Alex Haley began what became a 20-year career in the United States Coast Guard. [11]

Haley traced back his maternal ancestry, through genealogical research, to Jufureh, in The Gambia. [12] 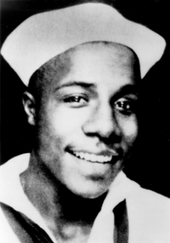 Haley during his tenure in the U.S. Coast Guard

Haley enlisted as a mess attendant. Later he was promoted to the rate of petty officer third-class in the rating of steward, one of the few ratings open to blacks at that time. [13] It was during his service in the Pacific theater of operations that Haley taught himself the craft of writing stories. During his enlistment other sailors often paid him to write love letters to their girlfriends. He said that the greatest enemy he and his crew faced during their long voyages was not the Japanese forces but rather boredom. [11]

After retiring from the U.S. Coast Guard, Haley began another phase of his journalism career. He eventually became a senior editor for Reader's Digest magazine. Haley wrote an article for the magazine about his brother George's struggles to succeed as one of the first black students at a Southern law school.

Haley conducted the first interview for Playboy magazine. Haley elicited candid comments from jazz musician Miles Davis about his thoughts and feelings on racism in an interview he had started, but not finished, for Show Business Illustrated, another magazine created by Playboy founder Hugh Hefner that folded in early 1962. Haley completed the interview and it appeared in Playboy's September 1962 issue. [14] That interview set the tone for what became a significant feature of the magazine. Rev. Martin Luther King Jr.'s Playboy Interview with Haley was the longest he ever granted to any publication. [15]

Throughout the 1960s Haley was responsible for some of the magazine's most notable interviews, including one with George Lincoln Rockwell, leader of the American Nazi Party. He agreed to meet with Haley only after gaining assurance from the writer that he was not Jewish. Haley remained professional during the interview, although Rockwell kept a handgun on the table throughout it. (The interview was recreated in Roots: The Next Generations, with James Earl Jones as Haley and Marlon Brando as Rockwell.) [16] Haley also interviewed Muhammad Ali, who spoke about changing his name from Cassius Clay. Other interviews include Jack Ruby's defense attorney Melvin Belli, entertainer Sammy Davis, Jr., football player Jim Brown, TV host Johnny Carson, and music producer Quincy Jones.

The Autobiography of Malcolm X 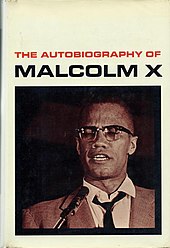 The Autobiography of Malcolm X, published in 1965, was Haley's first book. [17] It describes the trajectory of Malcolm X's life from street criminal to national spokesman for the Nation of Islam to his conversion to Sunni Islam. It also outlines Malcolm X's philosophy of black pride, black nationalism, and pan-Africanism. Haley wrote an epilogue to the book summarizing the end of Malcolm X's life, including his assassination in New York's Audubon Ballroom.

Haley ghostwrote The Autobiography of Malcolm X based on more than 50 in-depth interviews he conducted with Malcolm X between 1963 and Malcolm X's February 1965 assassination. [18] The two men had first met in 1960 when Haley wrote an article about the Nation of Islam for Reader's Digest. They met again when Haley interviewed Malcolm X for Playboy. [18]

The initial interviews for the autobiography frustrated Haley. Rather than discussing his own life, Malcolm X spoke about Elijah Muhammad, the leader of the Nation of Islam; he became angry about Haley's reminders that the book was supposed to be about Malcolm X. After several meetings, Haley asked Malcolm X to tell him something about his mother. That question drew Malcolm X into recounting his life story. [18] [19]

In 1966 Haley received the Anisfield-Wolf Book Award for The Autobiography of Malcolm X. [22]

In 1973 Haley wrote his only screenplay, Super Fly T.N.T.. The film starred and was directed by Ron O'Neal. 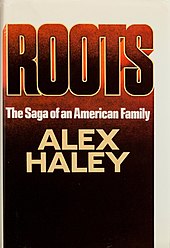 Roots: The Saga of an American Family, first edition (1976)

In 1976 Haley published Roots: The Saga of an American Family, a novel based on his family's history, going back to slavery days. It started with the story of Kunta Kinte, who was kidnapped in the Gambia in 1767 and transported to the Province of Maryland to be sold as a slave. Haley claimed to be a seventh-generation descendant of Kunta Kinte, and his work on the novel involved twelve years of research, intercontinental travel, and writing. He went to the village of Juffure, where Kunta Kinte grew up and listened to a tribal historian ( griot) tell the story of Kinte's capture. [1] Haley also traced the records of the ship, The Lord Ligonier, which he said carried his ancestor to the Americas. [23]

Haley stated that the most emotional moment of his life occurred on September 29, 1967, when he stood at the site in Annapolis, Maryland, where his ancestor had arrived from Africa in chains exactly 200 years before. A memorial depicting Haley reading a story to young children gathered at his feet has since been erected in the center of Annapolis. [24]

Roots was eventually published in 37 languages. Haley won a special Pulitzer Prize for the work in 1977. [25] The same year, Roots was adapted as a popular television miniseries of the same name by ABC. The serial reached a record-breaking 130 million viewers. Roots emphasized that black Americans have a long history and that not all of that history is necessarily lost, as many believed. Its popularity also sparked a greatly increased public interest in genealogy. [1] [3]

In 1979 ABC aired the sequel miniseries, Roots: The Next Generations, which continued the story of Kunta Kinte's descendants. It concluded with Haley's travel to Juffure. Haley was portrayed at different ages by Kristoff St. John, The Jeffersons actor Damon Evans, and Tony Award winner James Earl Jones. In 2016, History aired a remake of the original miniseries. Haley appeared briefly, portrayed by Tony Award winner Laurence Fishburne.

Haley was briefly a "writer in residence" at Hamilton College in Clinton, New York, where he began work on Roots. He enjoyed spending time at a local bistro called the Savoy in nearby Rome, where he would sometimes pass the time listening to the piano player. Today, there is a special table in honor of Haley at the Savoy, and a painting of Haley writing Roots on a yellow legal tablet.

Plagiarism lawsuits and other criticism

Roots faced two lawsuits that charged plagiarism and copyright infringement. The lawsuit brought by Margaret Walker was dismissed, but Harold Courlander's suit was successful. Courlander's novel The African describes an African boy who is captured by slave traders, follows him across the Atlantic on a slave ship, and describes his attempts to hold on to his African traditions on a plantation in America. Haley admitted that some passages from The African had made it into Roots, settling the case out of court in 1978 and paying Courlander $650,000. [26] [27]

Genealogists have also disputed Haley's research and conclusions in Roots. The Gambian griot turned out not to be a real griot, and the story of Kunta Kinte appears to have been a case of circular reporting, in which Haley's own words were repeated back to him. [28] [29] None of the written records in Virginia and North Carolina line up with the Roots story until after the Civil War. Some elements of Haley's family story can be found in the written records, but the most likely genealogy would be different from the one described in Roots. [30]

Haley and his work have been excluded from the Norton Anthology of African-American Literature, despite his status as the United States' best-selling black author. Harvard University professor Dr. Henry Louis Gates, Jr., one of the anthology's general editors, has denied that the controversies surrounding Haley's works are the reason for this exclusion. In 1998, Dr. Gates acknowledged the doubts surrounding Haley's claims about Roots, saying, "Most of us feel it's highly unlikely that Alex actually found the village whence his ancestors sprang. Roots is a work of the imagination rather than strict historical scholarship." [31]

Haley's grave beside his boyhood home at Henning, Tennessee in 2010.

Early in the 1980s, Haley worked with the Walt Disney Company to develop an Equatorial Africa pavilion for its Epcot Center theme park. Haley appeared on a CBS broadcast of Epcot Center's opening day celebration, discussing the plans and exhibiting concept art with host Danny Kaye. Ultimately, the pavilion was not built due to political and financial issues. [32]

Late in the 1970s, Haley had begun working on a second historical novel based on another branch of his family, traced through his grandmother Queen; she was the daughter of a black slave woman and her white master. He did not finish the novel before dying in Seattle, Washington, of a heart attack. He was buried beside his childhood home in Henning, Tennessee. At his request, the novel was finished by David Stevens and was published as Alex Haley's Queen. It was subsequently adapted as a miniseries of the same name in 1993.

Late in Haley's life he had acquired a small farm in Clinton, Tennessee, although at the time it had a Norris, Tennessee address. The farm is a few miles from the Museum of Appalachia, and Haley lived there until his death. After he died, the property was sold to the Children's Defense Fund (CDF), which calls it the Alex Haley Farm. The nonprofit organization uses the farm as a national training center and retreat site. An abandoned barn on the farm property was rebuilt as a traditional cantilevered barn, using a design by architect Maya Lin. The building now serves as a library for the CDF. [33]

In the city dock section of Annapolis, Maryland, there is a memorial to mark the arrival location of Kunta Kinte in 1767. The monument, dedicated on June 12, 2002, also celebrates the preservation of African-American heritage and family history. [43]