The Alcázar of Segovia (literally "Segovia Fortress") is a medieval castle located in the city of Segovia, Castile and León, Spain. The fortress is a World Heritage Site by UNESCO. Rising out on a rocky crag above the confluence of two rivers near the Guadarrama mountains, it is one of the most distinctive castle-palaces in Spain by virtue of its shape – like the bow of a ship. The alcázar was originally built to serve as a fortress but has served as a royal palace, a state prison, a Royal Artillery College, and a military academy since then.[ citation needed] It is currently[ when?] used as a museum and a military archives building.

Tower of John II of Castile 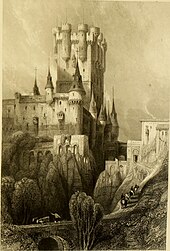 Painting of the Alcázar of Segovia, circa 1838 by David Roberts

The Alcázar of Segovia, like many fortifications in Spain, started off as a Roman fort, but apart from the foundations, little of the original structure remains.[ citation needed] A Muslim era fort, which was itself largely replaced by the present structure, was built by the Berber Almoravid dynasty. The first reference to this castle was in 1120, around 32 years after the city of Segovia returned to Christian hands (during the time when King Alfonso VI reconquered lands to the south of the Duero river down to Toledo and beyond).[ citation needed]

The shape and form of the Alcázar was not known until the reign of King Alfonso VIII (1155–1214), however early documentation mentioned a wooden stockade fence.[ citation needed] It can be concluded[ by whom?] that prior to Alfonso VIII's reign, the Muslim era structure was no more than a wooden fort built over the old Roman foundations. Alfonso VIII and his wife, Eleanor of England, made this alcázar their principal residence and much work was carried out to erect the beginnings of the stone fortification we see today.[ citation needed]

The Alcázar of Segovia was one of the favorite residences of the monarchs of Castile in the Middle Ages, and a key fortress in the defence of the kingdom.[ citation needed] It was during this period that most of the current building was constructed by the Trastámara dynasty.[ citation needed]

In 1474, the Alcázar played a major role in the rise of Queen Isabella I. On 12 December news of the King Henry IV's death in Madrid reached Segovia and Isabella immediately took refuge within the walls of the Alcázar where she received the support of Andres Cabrera and Segovia's council.[ citation needed] She was enthroned the next day as Queen of Castile and León.

During his visit to Spain known as the " Spanish match", Prince Charles of England visited the Alcázar in 1623, after dining at Valsain. [1] He was entertained by Luis Jerónimo de Cabrera, 4th Count of Chinchón, who was then keeper of the Alcázar. Prince Charles was shown the Galley Room or "second great hall" with the heraldry of Catherine of Lancaster. In the evening there was a torchlit masque involving 32 mounted knights. Prince Charles gave the Count of Chinchón a jewel and rewarded the poet Don Juan de Torres for his verses. He left early in the morning for Santa María la Real de Nieva. [2]

The royal court eventually moved to Madrid and the Alcázar then served as a state prison for almost two centuries before King Charles III founded the Royal Artillery School in 1762. It served this function for almost a hundred years until March 6, 1862 where a fire badly damaged most of the roofs.[ citation needed]

It was only in 1882 that the damaged roofs of the building were slowly restored to their original state, thanks to the existence of engravings made by José María Avrial in 1839. [3] In 1896, King Alfonso XIII ordered the Alcázar to be handed over to the Ministry of War as a military college.[ citation needed] 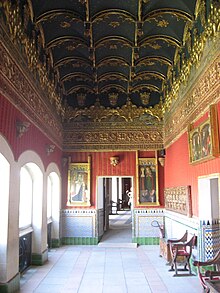 The exterior of the castle has a Herrerian courtyard, moat, drawbridge and the keep. The interior rooms include a chapel and several noble rooms (room del Trono, de la Galera, de las Piñas, de los Reyes and others) that can be visited today.

Its plan is very irregular[ according to whom?] and adapts to the hill on which it rises. Highlights are the very beautiful keep, the square with four towers, the hall covered with pointed barrel and twin windows. It was raised by the king John II of Castile and at first served as a Weapons room.[ citation needed]

In the interior, the halls and rooms were decorated with great luxury and beauty by Mudéjar painters and artists.[ citation needed] Currently, it houses an Armory Museum and the General Military Archive of Segovia, the oldest historical archive of the Spanish Armed Forces.[ citation needed]

Tower of John II of Castile 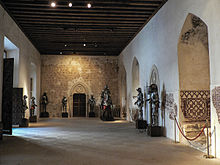 Hall of the Old Palace. 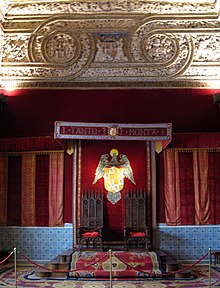 View of the Throne Room, with the motto of the Catholic Monarchs on the front of the dossal. 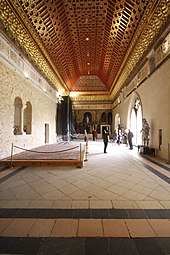 Hall of the Galley, with the mural of the coronation of Isabella I of Castile in the background. 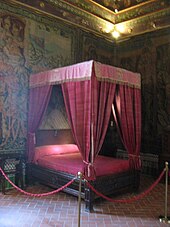 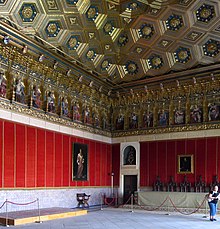 Hall of the Kings. 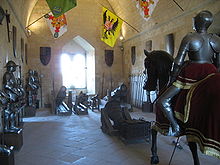 The tower of John II of Castile culminates in a large panoramic terrace. From it you can appreciate a great view of the city.[ opinion] Especially the neighborhood of las Canonjías, the cathedral and the Jewish quarter.[ opinion]

The two staircases that go to the top have 156 steps, most of them on a rather narrow and inclined spiral staircase.[ citation needed]

When crossing the gate that gives access to the first staircase, notice the considerable thickness of the walls. When the first section ends, you will reach the guard room. Attached to the front wall is the bed where the watchman of the tower probably slept.[ citation needed]

The interior of the Castle of Segovia is in perfect accordance with the magnificence of its exterior. Many apartments are decorated with delicate traceries and pendant ornaments, in the style of the Alhambra, and, like those of the Alcazar of Seville, were executed by Arabian workmen during the Christian dominion of the fourteenth century, for in many places the crowns of the kings of Castille may be seen, surrounded by Latin mottoes [sic] and extracts from the Koran.

Hall of the Old Palace

Hall of the Fireplace

Throne Room or that of del Solio

The thrones under dossal with the coat of arms of the Catholic Monarchs and its motto " Tanto monta" are works of the beginning of the century.[ citation needed] On the walls are the portraits of the kings themselves, who are part of the iconography of kings commissioned by the queen Isabella II of Spain. The portrait of Isabella I of Castile is signed by Madrazo and that of Ferdinand II of Aragon by Montañés.[ citation needed]

Hall of the Galley

Its name (in Spanish, "piñas" means pineapples) is due to the decorative motifs in the artesonado ceiling, featuring many pineapple-like pieces. The stained glass window represents Alfonso VII with his daughter Berenguela.[ citation needed]

In its walls you can see scenes of the family life of the Catholic Monarchs.[ citation needed] The bed has a brocade cover woven in gold.

Hall of the Kings

Philip II of Spain commissioned Hernando de Ávila the design of the statues corresponding to the kings of Asturias, León and Castile; except only that of Joanna the Mad after moving to Royal Palace of Madrid, Spain.[ citation needed] One of the paintings in the room is a portrait of Philip II himself and the other two are portraits of two of his wives, Elisabeth of Valois and Anna of Austria.[ citation needed]

Room of the Belt

Its name is because it is surrounded by walls, a long golden lace.[ citation needed]

There is a chapel in the Room of the Belt from which the king or queen saw the mass.[ citation needed]

The Alcázar has housed the armory of the House of Trastámara since old times, and was the precedent of the collections of weapons that finally met in the Royal Armoury of Madrid. [5]

Museum of the Royal College of Artillery

Depicted as Koka's castle, it is the first shown fortress in the manga Berserk.

The castle also served as the French home of Sir Lancelot du Lac, Joyous Gard, in the 1967 musical film Camelot. The castle's silhouette and overall appearance also inspired the castle in Disney's 1937 animated classic, Snow White and the Seven Dwarves.

Sylvain Castle, a dungeon in the 1995 action RPG Terranigma, is based on it.