From Wikipedia
https://en.wikipedia.org/wiki/Adat
Customary law in Muslim regions
This article is about customary law. For the digital recording format, see ADAT. 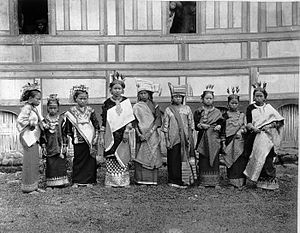 Adat ( Jawi: عادت) is the generic term derived from Arabic language for describing a variety of local customary practices and tradition as observed by Muslim communities in North Caucasus, Central Asia and Southeast Asia. Despite its Arabic origin, the term adat resonates deeply throughout the Maritime Southeast Asia, where due to colonial influence, its usage has been systematically institutionalised into various non-Muslim communities. [1] Within the region, the term refers, in a broader sense, to the customary norms, rules, interdictions, and injunctions that guide individual's conduct as a member of the community and the sanctions and forms of address by which these norms and rules, are upheld. [2] Adat also include the set of local and traditional laws and dispute resolution systems by which society was regulated.

The word adat is derived from the Arabic word ʿādā́t (عادات), the plural form of ʿā́da (عادَة), meaning custom, or habit and is considered as synonymous with urf (عرف), something which is commonly known or accepted. [3] It generally refers to the result of long-standing convention, either deliberately adopted or the result of unconscious adaptation to circumstances, that has been followed where practical considerations have been uppermost. [4]

Prior to the arrival of Islam, the peoples of North Caucasus and Central Asia had long-established codes of legal and civil law, which in the Islamic period came to be known by the term adat. Adat in traditional Central Asian societies are guided by authoritative members of communities, usually councils of Aqsaqals. It is based on a tribal code of conduct and on centuries of experience in conflict resolution between individuals, communities, and tribes. [5] In North Caucasus, the traditional value codex of adat held that the Teip ('clan') was the chief reference for loyalty, honor, shame and collective responsibility. [6] The Russian Empire's colonial administration did not interfere with local legal practices and delegated the administration at the local community level to the councils of aqsaqals and teips. So did the Bolsheviks during the first years of the revolution of 1917. The adat was practiced among the Central Asians and North Caucasians up until the early 1930s, before Soviet authorities banned its use and replaced it with the civil law. [7]

In Southeast Asia, the concept of adat and its meanings were first formulated in the Islamised Malay-speaking world, apparently to distinguish non-Islamic from Islamic practices. [8] In the 15th century, the Melaka empire developed a code of international shipping law, Undang-Undang Laut Melaka, and a civil and commercial code, Undang-Undang Melaka, which was heavily Islamic but with extensive adat influences. These codes would later spread across the region and became the legal source for local jurisprudence in major regional sultanates like Brunei, Johor, Pattani and Aceh. [9]

In the early decades of the twentieth century, in the Dutch East Indies, the study of adat emerged as a specialised field of inquiry. Although associated with the needs of colonial administration, this study nevertheless gave rise to an active scholarly discipline that dealt with differing systems of adat comparatively. [10] Among notable scholars in this study were, Van Vollenhoven, Ter Haar and Snouck Hurgronje. Several key concepts that are still being used today within the customary law research in modern Indonesia are; adatrecht ('adat law'), adatrechtskringen ('adat law circles'), beschikkingsrecht (communal rights over land or 'right to avail') and adatrechtsgemeenschappen ('adat law communities'). [11] The adat law or adatrecht has been used by colonial government as a legal term designating a prescriptive right, which was given currency as an independent legal entity apart from the canon law. Local indigenous laws and customs of all ethnic groups, including those of non-Muslims, began to be collectively termed as "adat", and were encoded into units of jural management, whereby legal pluralism in East Indies was introduced. Under this scheme, based on a classification of adat systems as cultural geographic units, the Dutch divided the East Indies into at least 19 adat law areas. [12]

Adat is still enforced in the courts of Brunei, Malaysia and Indonesia as personal law in certain aspects. In Malaysia, each state's constitution empowered Malay Rulers as the head of Islam and Malay customs in their respective state. State councils known as Majlis Agama Islam dan Adat Istiadat Melayu (Council of Islam and Malay Customs) are responsible in advising the rulers as well as regulating both Islamic affairs and adat. [13] [14] Legal proceedings on matters related to Islamic affairs and adat (such as harta sepencarian or 'matrimonial property' cases) are carried out in Syariah Court. In Sarawak and Sabah, native adat laws of non-Malay indigenous communities were institutionalised through the establishment of courts known as Mahkamah Bumiputera (' Bumiputra courts') and Mahkamah Anak Negeri ('native courts') respectively. [15] A parallel system exist in the Peninsular Malaysia for ethnic Malays, called Mahkamah Penghulu ( Penghulu's courts- Mukim headman courts) but with very limited jurisdiction. In Indonesia, adat rules are still of legal relevance in some areas, especially in most Hindu villages in Bali, the Tenger area and in the region of Yogyakarta and Surakarta.

Following the dissolution of the Soviet Union, adat practices in Central Asia began to resurrect in the 1990s among communities in rural areas. This was largely due to a decay of legal and law enforcement institutions in many parts of the region. The constitution also contributed to this process, since it empowered some traditional institutions such as councils of elders (aqsaqals), with some administrative authorities. [16] In North Caucasus, traditional, clan-based systems of self-government, which had been functioning underground since the 1950s, began to reappear in response to the federal government's neglect and the local administration's impotence. Because of loss of Islamic scholars and literature during the Stalinist years, the adat that emerged contained almost no elements of Islamic law. However, there are growing number of participation of Muslim scholars in adat proceedings, who are now involved in most important decisions in village assemblies and district administrations. [17]

In the Malay States of Southeast Asia, the Malay community may be classified formally and historically into two different groups: one following Adat Temenggung and the other, Adat perpatih.

Adat Temenggung (customs or rules of Temenggung) is the most common form of adat which is patrilineal and more pervasive, and it can be found in majority of Malay states. Adat perpatih confined almost exclusively to Negeri Sembilan where dwell the descendants of the Minangkabau immigrants from West Sumatra, is associated with a matrilineal rule of descent and a political structure based upon the kinship system. [18]

Though both adat originated from tribal organizations in the past, it is in Adat Perpatih that the remnants of tribal structure are clearly evident at present. To cite one instance, marriage between two persons belonging to the same clan is regarded as incestuous and is strictly prohibited. [19]

The major concern with adat, both Temenggung and Perpatih in the research and literature, has been with so-called adat law, or the definition of rights to property, rank and other privileges in traditional Malay society. Studies of adat law have chiefly been preoccupied with the questions of its relationship to Islamic law ( Sharia law) and the legal cases to which such conflicts have given rise. [20] In Malay culture, there are at least five different perspectives of adat: