From Wikipedia
https://en.wikipedia.org/wiki/Adam_Mickiewicz_University_in_Poznań
University in Poland

It traces its origins to 1611, when under the Royal Charter granted by King Sigismund III Vasa, the Jesuit College became the first university in Poznań. [5] The Poznań Society for the Advancement of Arts and Sciences which played an important role in leading Poznań to its reputation as a chief intellectual centre during the Age of Positivism and partitions of Poland, initiated founding of the university. [6] [7] The inauguration ceremony of the newly founded institution took place on 7 May 1919 that is 308 years after it was formally established by the Polish king and on 400th anniversary of the foundation of the Lubrański Academy which is considered its predecessor. Its original name was Piast University (Polish: Wszechnica Piastowska), which later in 1920 was renamed to University of Poznań (Polish: Uniwersytet Poznański). [8] During World War II staff and students of the university opened an underground Polish University of the Western Lands (Polish: Uniwersytet Ziem Zachodnich). In 1955 University of Poznań adopted a new patron, the 19th-century Polish Romantic poet Adam Mickiewicz, and changed to its current name.

The university is organized into six principal academic units—five research schools consisting of twenty faculties and the doctoral school—with campuses throughout the historic Old Town and Morasko. The university employs roughly 4,000 academics, and has more than 40,000 students who study in some 80 disciplines. More than half of the student body are women. The language of instruction is usually Polish, although several degrees are offered in either German or English. The university library is one of Poland's largest, and houses one of Europe's largest Masonic collections, including the 1723 edition of James Anderson's The Constitutions of the Free-Masons. [9] [10] [11]

The university is currently publishing over 79 research journals, most of them on Pressto [12] publishing platform based on Open Journal System. Adam Mickiewicz University Repository (AMUR) [13] contains over 23704 records of research publications [14] and is one of the first research repositories in Poland. 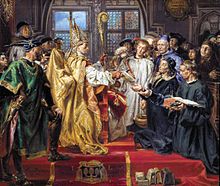 From the beginning, the history of the Adam Mickiewicz University has been inextricably linked to the history of Poznań itself and in some measure – the history of the entire Republic of Poland, which, partitioned by the neighboring countries (Prussia, Austria-Hungary and Russia) towards the end of the eighteenth century disappeared from the European map for more than a hundred years. On 28 October 1611, when under the Royal Charter granted by King Sigismund III Vasa, the Jesuit College became the first university in Poznań. [5] These edicts were later affirmed with charters issued by King John II Casimir in 1650 and King John III Sobieski in 1678, the university in Poznań lasted until 1773. [7] Based on these charters, the university granted scholar degrees to its members. 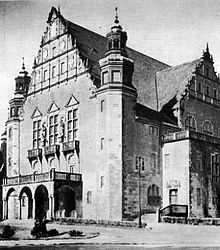 Collegium Minus as a part of Nazi Reichsuniversität Posen (1941)

The inauguration ceremony of the newly founded took place on 7 May 1919 that is 308 years after it was formally established by the Polish king and the 400th anniversary of the foundation of the Lubrański Academy which is considered its spiritual predecessor. Its original name was Piast University (Polish: Wszechnica Piastowska), which later in 1920 was renamed to the University of Poznań (Polish: Uniwersytet Poznański). [8] In 1920 sociologist Florian Znaniecki founded the first Polish department of sociology at the university, one of the first such departments in Europe. In the same period of the university's history, botanist Józef Paczoski founded the world's first institute of phytosociology.

After the invasion of Poland, Poznań was annexed by Germany and the University was closed by the Nazis in 1939. It was reopened as a German university in 1941, which operated until 1944. Staff and students of the Polish university, some of them expelled by Germans to Warsaw, opened an underground Polish University of the Western Lands (Polish: Uniwersytet Ziem Zachodnich), whose classes met in private apartments (see Education in Poland during World War II). Many of the professors and staff were imprisoned and executed in Fort VII in Poznań, including professor Stanisław Pawłowski (rector in the years 1932-33). [16] The Polish university reopened, in much smaller form, after the end of World War II. In 1950, the Medical Faculty, including the Dentistry section and the Faculty of Pharmacy, were split off to form a separate institution, now the Poznań University of Medical Sciences. In 1955 the University of Poznań adopted a new patron, the 19th-century Polish Romantic poet Adam Mickiewicz, and changed to its current name.

The university's central administrative building is Collegium Minus, on the west side of Adam Mickiewicz Square at the western end of the street Święty Marcin. (This is one of a group of buildings, including the Imperial Palace, built in the first decade of the 20th century while Poznań was still under German rule; it originally housed a Royal Academy.) Adjoining this is the Aula, which is frequently used for ceremonies and for classical music concerts, and Collegium Iuridicum (accommodating the law faculty). Some teaching takes place in Collegium Maius, another of the aforementioned group of buildings (on ul. Fredry), although this is mainly used by the medical university. Other buildings in the city centre include former communist party headquarters on Święty Marcin, Collegium Novum (used mainly for language teaching) on Al. Niepodległości, and the university library on ul. Ratajczaka.[ citation needed] 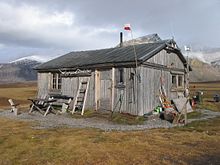 Skottehytta – venue of until 2009. Since then the Adam Mickiewicz University Polar Station is located in container on opposite side of the bay.

The university also uses a number of other buildings in southern and western districts of Poznań. However, it is strongly developing its site at Morasko in the north of the city. As of 2006, the faculties of physics, mathematics and computer science, biology, geographical and geological science had moved to the new location. In 2015 they were joined by the faculty of history (Collegium Historicum Novum). [17]

The university also has external branches in other towns of western Poland, including Kalisz, Ostrów Wielkopolski and Słubice. Adam Mickiewicz University maintains close cooperation with Viadrina European University, Germany. The two universities jointly operate the Collegium Polonicum, located just opposite Viadrina on the Polish side of the Oder River.[ citation needed]

University owns a seasonal polar research station located in the Petuniabukta (Petunia Bay), in the Northern part of Billefjord, and central part of Spitsbergen island in the Svalbard archipelago. [18] 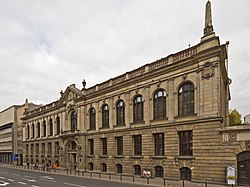 University Library (opened in 1902 as Kaiser-Wilhelm-Bibliothek)

The Adam Mickiewicz University is one of the top Polish universities. It was ranked by Perspektywy magazine as the third Polish university. [23] International rankings such as ARWU and QS University Rankings rank the university as the fourth best Polish higher level institution. [24] 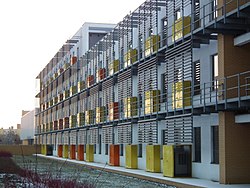 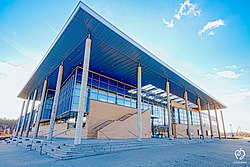 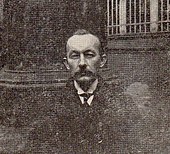 Prof. Józef Kostrzewski, one of the founding fathers of the university (1924) 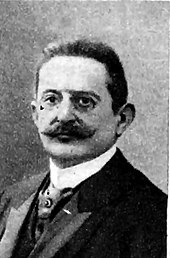 Adam Mickiewicz University's prestige and large class size have enabled it to graduate a large number of distinguished alumni.

Many AMU alumni are leaders and innovators in the business world, as well as prominents in society and the arts. Its graduates include authors ( Kazimiera Iłłakowiczówna, Ryszard Krynicki, Stanisław Barańczak), journalists ( Adam Michnik, Max Kolonko), entrepreneurs ( Jan Kulczyk, Grażyna Kulczyk); composer Jan A. P. Kaczmarek, the recipient of the Academy Award for Best Original Score (2004); theatre practitioner Lech Raczak, film director Filip Bajon and literary critic and a music aficionado, Jerzy Waldorff. One of the most notable resistance fighters of the Home Army during Second World War, Jan Nowak-Jeziorański majored in economics in 1936, he worked as an assistant professor at the university. [25]

Presidents of the Council of Ministers

Three of the school's graduates, including Prof. Alfons Klafkowski (1985−1989), Prof. Mieczysław Tyczka (1989−1993) and Julia Przyłębska (since 2016), have served as the Presidents of the Constitutional Tribunal of the Republic of Poland. Three of the current fifteen members of the court graduated from AMU: Julia Przyłębska, Dr. Andrzej Zielonacki and Prof. Justyn Piskorski. Additionally, the President of Poland, Andrzej Duda, refused to swear in Prof. Roman Hauser, former President of the Supreme Administrative Court of Poland and Prof. Krzysztof Ślebzak as the Tribunal's judges.

Among the University's notable graduates are also:

Marian Rejewski, Jerzy Różycki and Henryk Zygalski, Polish mathematicians and cryptologists who worked at breaking the German Enigma ciphers before and during World War II

In the 1920s the German military began using a 3-rotor Enigma, whose security was increased in 1930 by the addition of a plugboard. The Polish Cipher Bureau sought to break it due to the threat that Poland faced from Germany, but its early attempts did not succeed. Near the beginning of 1929, the Polish Cipher Bureau realized that mathematicians may make good codebreakers; the bureau invited math students at University of Poznań to take a class on cryptology. [28] [29]

After the class, the Bureau recruited some students to work part-time at a Bureau branch set up in Poznań for the students. The branch operated for some time. On 1 September 1932, 27-year-old Polish mathematician Marian Rejewski and two fellow Poznań University mathematics graduates, Henryk Zygalski and Jerzy Różycki, joined the Bureau full-time and moved to Warsaw. Their first task was to reconstruct a four-letter German naval cipher. [30] [31]

Main article: Cryptanalysis of the Enigma

Wisława Szymborska, recipient of the 1996 Nobel Prize in Literature, received a degree of Honorary Doctor of Letters of Adam Mickiewicz University in 1995, and it's the only honorary doctorate she has ever accepted. [32] [33]