Wamesa is an Austronesian language of Indonesian New Guinea, spoken across the neck of the Doberai Peninsula or Bird's Head. The language is often called Wandamen in the literature; however, several speakers of the Windesi dialect have stated that 'Wandamen' and 'Wondama' refer to a dialect spoken around the Wondama Bay, studied by early missionaries and linguists from SIL. They affirm that the language as a whole is called 'Wamesa', the dialects of which are Windesi, Bintuni, and Wandamen. [3] While Wamesa is spoken in West Papua, Wamesa is not a Papuan language but rather a SHWNG language.

Wamesa is one of the approximately 750 languages of Indonesia. There are currently 5,000-8,000 speakers of Wamesa. While it was historically used as a lingua franca, it is currently considered to be an under-documented, endangered language. This means that fewer and fewer children have an active command of Wamesa. Instead, Papuan Malay has become increasingly dominant in the area.

Although the Dutch colonized West Papua, the Wamesa people generally regard the Dutch with high regard. The Dutch were relatively hands-off and did not have much of a physical presence although they built schools and churches. Today, a number of monuments positively depicting historical relations with the Dutch can be seen in the Wamesa community. Additionally, the German missionaries Ottow and Geissler are widely celebrated and memorialized. In contrast, however, relations with the Indonesian government have been less stable. For example, the Papua Conflict has been occurring for decades, following the New York Agreement and the " Act of Free Choice."

There are five contrastive vowels in Wamesa, as is typical of Austronesian languages. [3] These vowels are shown in the tables below.

Five diphthongs appear in Wamesa: /au/, /ai/, /ei/, /oi/, and /ui/. Two-vowel and three-vowel clusters are also common in Wamesa. Almost all VV-clusters contain at least one high vowel, and no two non-high vowels may be adjacent in larger clusters.

There are 14 consonants in Wamesa, three of which are marginal (shown in parentheses in the table below).

Labial, coronal and velar places of articulation are contrastive in Wamesa. Coronal plosives sound relatively dental and may therefore be referred to as alveolar or alveo-dental until palatography can be executed to corroborate this. [3] [4] Lateral /l/ and affricate /d͡ʒ/ appear only in loanwords, while all other sounds occur in native Wamesa words. The voiced velar fricative /g/ is a marginal phoneme because it only appears following /ŋ/.

The coronal tap and trill are in free variation, though the trill tends to occur more in word-initial or word-final position and in careful speech.

Place and manner contrasts as described above are supported by the minimal and near-minimal pairs found in the following table. Where possible, Wamesa words have been selected to show native (non-loan) phonemes in the environment /C[labial]a_a/.

There are no underlying glides in Wamesa, [j] and [w] are allophones of the vowel phonemes /i/ and /u/. This phonetic alternation is obligatory, permitted, or prohibited, depending upon the environment. 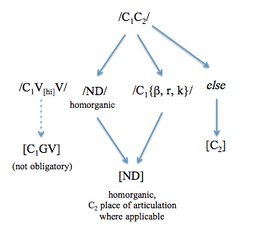 Complex onsets and codas are not permitted in Wamesa, and consonant clusters across syllable boundaries are usually reduced, such that /C1C2/ surfaces as [C2]. However, there are three exceptions to this; clusters of homorganic nasals and voiced plosives are permitted to surface, as are consonant- glide clusters that form through the morphophonological processes described above. Additionally, an underlying cluster of a consonant followed by /β/ /r/ or /k/ does not reduce but surfaces as a nasal followed by a homorganic voiced plosive, both of which derive their place features from underlying /C2/.

Data from related languages of the Yapen and Biakic groups suggests that historically, /β/ /r/ and /k/ were *b *d and *g in Proto-Eastern Malayo-Polynesian. In this case, these phones would have formed a natural class of voiced plosives to which phonological rules could uniformly apply. [3]

Wamesa is a bounded language with a 3-syllable, right-aligned stress window, meaning that stress alternates and primary stress falls on the final, penultimate, or antepenultimate syllable of the Pword. However, the distribution is not even; in a random sampling test of 105 audio clips, 66 tokens had primary stress on the penultimate syllable. With the addition of enclitics, primary stress sometimes shifts towards the end of the word to stay within the stress window, but since Wamesa prefers its metrical feet to be trochees, stress usually jumps from the head of one foot to the next, rather than jumping single syllables.

Note that stress in Wamesa is not predictable, meaning there is no rule for where primary stress will occur. Therefore, stress is specified in the underlying form of words. However, as mentioned earlier, stress shift may occur in certain words in order to create a better phonological structure (i.e. create alternation while avoiding clash and lapse).

Secondary stresses are apparent in words of more than two syllables and, in cases of shifting stress, can be added at the beginnings of words to reduce lapses (several adjacent syllables without any stress). In the example below, the addition of the enclitic determiner =pai causes primary stress to shift to the right by two syllables (a single foot), and a secondary stress is added to the left in order to fill the lapse.

However, secondary stress always precedes primary stress and clitics are never able to carry stress in Wamesa. These two factors mean that the addition of multiple enclitics sometimes causes large lapses at the ends of words. For example, the construction below has a 5-syllable lapse at the end.

This would appear to be a violation of the 3-syllable stress window, but the fact that clitics never carry stress indicates that they may combine with their hosts at the level of the Pphrase rather than at Pword, where the stress window is relevant. Additionally, lapse is evaluated at the level of the Pword, meaning that stress in the following word never shifts to compensate. That is to say, stress in a word following the above construction would never shift leftwards for the purpose of reducing the lapse between words. This is in contrast to clash, (adjacent stressed syllables) which is evaluated at the level of the phonological phrase. Thus, to avoid clash, stress can shift within a word to compensate for the presence of a stressed syllable across a word boundary. For example, the word ka.tú 'small' typically has a stressed final syllable. However, when followed by yá.na 'there' as in the phrase below, stress within ka.tú shifts to avoid two adjacent stressed syllables.

In much of the literature on Wamesa an orthography is used which is based on the orthographic system of Indonesian. This orthography diverges from IPA notation in the following cases:

Wamesa is an SVO (subject, verb, object) language. Wamesa has NADQ (noun, adjective, demonstrative, quantifier) order, which is rare in the world's languages. [5]

When a sentence involves an applicative, the word order is as follows: (subject) instrument verb (object), with the items in parentheses as optional.

With regard to verbs, phrases must adhere to the following rules:

There are only two manner adverbs in Wamesa: saira ‘quickly’ and nanaria ‘slowly.’ Reduplication is used for emphasis: (e.g. sasaira ‘very quickly’).

Prepositions are non-stackable, meaning they must not appear directly next to a location word nor another preposition. Additionally, they require an NP (noun phrase) complement.

Wamesa does not have an infinitive construction, but it does have serial verb constructions (SVC's). This means that a sequence of multiple verbs may be used to describe a single event. SVC's in Wamesa include the following serializations: same subject, switch subject, multiple object, ambient, and conjoined participant. [6]

Wamesa does not have a true passive since subject agreement is always marked on the verb. However, when the subject is omitted and the object is moved to the beginning of the sentence and topicalized, a sort of passive construction results.

Wamesa primarily has WH-in-situ, which means that the WH word does not move to the beginning of a sentence in question form and it instead takes the original place of the thing in question. In contrast, English primarily has WH-raising. That said, Wamesa has WH-raising with otopi ‘why’. Basic polar (yes/no) questions are created by inserting te after a sentence that would otherwise be a declarative sentence. Tag questions are formed by inserting ei after the original sentence.

A noun phrase (NP) in Wamesa may contain the following: noun, determiner, adjective, number, gender, class (human or nonhuman), relative clause, and quantifier. However, Wamesa does not have case, specificity, and tense. The marker for number goes on the determiner, not the noun. Number cannot be marked twice: it must either be marked explicitly on the determiner or implicitly with a quantifier. When constructing a sentence, there is a wide range of agreement options for human nouns but not for nonhuman nouns.

Wamesa has an applicative (it), causative (on), and essive (ve-). Additional affixes include markers for plural (-si ), singular (-i ), and 3rd plural human (-sia). Wamesa's clitics include the topicalizer =ma, focus =ya, =ye, =e; and the proximal (=ne), default/medial (=pa), and distal (=wa) definite determiners. Note that Wamesa clitics are only phonological and not syntactic.

Certain verbs involve the use of the supplemental morpheme -i. For example, the verb maso ‘sit’ requires a location, which can either be explicitly stated or represented by the morpheme -i.

When the verb sera ‘see’ involves an object, it can either be explicitly stated or represented by the morpheme -i.

*The information presented below uses orthography rather than IPA.

Note that with 2sg and 3sg, the agreement is infixed.

Usually, infixation is used to improve syllable structure by making a word CVCV (consonant vowel alternation). However, in the case of Wamesa, perceptual metathesis results in the opposite effect.

The clitic =va is used to indicate negation, but when it is attached at the end of a sentence, the result is structurally ambiguous, as the clitic may be negating any one of the words in the sentence.

The essive ve- functions as a verbalizer, ordinal, relativizer, or indicator of inherent properties, depending on the context in which it appears.

Wamesa has a number of locatives, including ones that act like nouns syntactically. Clitics include =ra (to.there), =ma (to.here), =wa (down), and =re (in progress).

Direction depends on geography and the “salient area” rather than cardinal directions. Direction is specified with regard to land, sea, and elevation.

Wamesa includes a number of loanwords and influences, particularly from Indonesian and Dutch.

Determiners can indicate distance, and their meaning is context dependent. The meaning can either be literal or metaphorical. For example, figurative distance can indicate salience or importance.

Wamesa's kinship system is an elaboration of the Iroquois kinship system. [7] However, as a result of Indonesian influence, over time, Wamesa has lost and collapsed distinctions such as mother's vs. father's side, sex, and parallel vs. cross-cousins. Wamesa does distinguish based on age (e.g. if a cousin is older or younger).

Ethics of Fieldwork in the Wamesa Community

In general, Wamesa community members are very proud of their language and view it as a gift to be shared with everyone. Thus, they promote research, encourage the publication and sharing of results, and request that the linguistic data be freely accessible. Additionally, community members believe that the spreading of knowledge of the Wamesa language can bring them social prestige and spiritual benefits. While monetary compensation may be desired or accepted by some members of the community, gift-giving may often be more culturally appropriate and significant. [8]