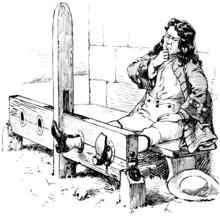 Stocks, unlike the pillory or pranger, restrain only the feet.

Stocks are restraining devices that were used as a form of corporal punishment and public humiliation.

The stocks, pillory, and pranger each consist of large wooden boards with hinges; however, the stocks are distinguished by restraining one's feet.

The stocks consist of placing boards around the ankles and wrists, whereas, with the pillory, the boards are fixed to a pole and placed around the arms and neck, forcing the punished to stand.

Some[ who?] consider the stocks an example of torture and cruel and unusual punishment.[ citation needed] Victims may be insulted, kicked, tickled, spat on, or subjected to other inhumane acts. In the Bible, the treatment of Paul and Silas, disciples of Jesus, was detailed in the Acts of the Apostles: "Having received such a charge, he put them into the inner prison and fastened their feet in the stocks." [1][ original research?] The Old Testament's book of Job also describes the stocks, referring to God:

He puts my feet in the stocks, he watches all my paths. [2][ original research?]

The stocks were employed by civil and military authorities from medieval to early modern times including Colonial America. Public punishment in the stocks was a common occurrence from around 1500 until at least 1748. [3] The stocks were especially popular among the early American Puritans, who frequently employed the stocks for punishing the "lower class". [4]

In the American colonies, the stocks were also used, not only for punishment, but as a means of restraining individuals awaiting trial. [5]

The offender would be exposed to whatever treatment those who passed by could imagine. This could include tickling of the feet. As noted by the New York Times in an article dated November 13, 1887, "Gone, too, are the parish stocks, in which offenders against public morality formerly sat imprisoned, with their legs held fast beneath a heavy wooden yoke, while sundry small but fiendish boys improved the occasion by deliberately pulling off their shoes and tickling the soles of their defenseless feet." [6] 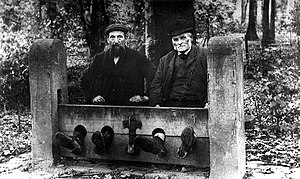 England's Statute of Labourers 1351 prescribed the use of the stocks for "unruly artisans" and required that every town and village erect a set of stocks. Sources indicate that the stocks were used in England for over 500 years and have never been formally abolished. [7]

Finger pillories often went by the name of "finger stocks". Public stocks were typically positioned in the most public place available, as public humiliation was a critical aspect of such punishment. Typically, a person condemned to the stocks was subjected to a variety of abuses, ranging from having refuse thrown at them, tickling to paddling, whipping of the unprotected feet ( bastinado).

Their last recorded use in the United Kingdom was in 1872 at either Adpar, Newcastle Emlyn, west Wales [8] or Newbury, Berkshire, England (11 June). [9]

In Toronto, Ontario, Canada, court records from 1811 required the building of a set of stocks for punishment. [10] The Spanish conquistadores introduced stocks as a popular form of punishment and humiliation against those who impeded the consolidation of their settlements in the new world. They were still used in the 19th century in Latin America to punish indigenous miners in many countries for rebelling against their bosses.

American courts normally punish offenders by sentencing them to incarceration in jail or prison or to probation, which may include community service.

In United States v. Gementera, (2004) the defendant was convicted of mail theft and sentenced, among other measures, to stand in front of a post office for eight hours wearing a sandwich board that read: "I stole mail. This is my punishment." [11] The U.S. Court of Appeals for the Ninth Circuit upheld this sentence, finding that the district court did not impose it solely for the purpose of humiliation, but also to serve the criminal-justice goals of deterrence and rehabilitation. [11] The Ninth Circuit further found that the alternative sentence did not violate the Eighth Amendment's ban on cruel and unusual punishment because it was "within the limits of civilized standards" and was not coupled with a lengthy prison sentence. [11]

In 1989 the Arkansas town of Dermott passed a curfew law punishable by up to thirty days in jail for the offender and up to two days in the stocks for the offender's parents. [12] The city almost immediately remitted the punishment because, among other things, the city did not have a set of stocks and had allocated no funds to build one. [13]

The British town of Thame made international headlines in 2016 when it took up a proposal to build stocks in the town. Introduced by Councillor David Bretherton, the stocks would be used for hire and for charitable events. As noted by Bretherton, "Perhaps for charity we could do something like that, get people in the stocks and have others donate money for the time they last while having their feet tickled.” [14] Bretherton noted that the stocks were still legal in England. It is not believed that the stocks would be used for actual punishment purposes. Currently, further study of the topic is ongoing. [15]

In Colombia in 2012, married thirty-four-year-old Alfreda Blanco Basilio and her eighteen-year-old lover Luis Martinez were placed in stocks by the Sampues tribe in Colombia due to Basilio's adultery. Basilio spent 72 hours barefoot in the stocks for her offense. [16] 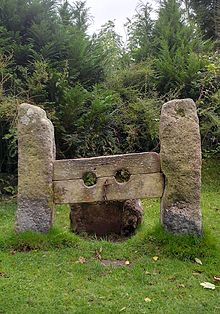 The Stocks at Belstone in Dartmoor, a Grade II listed monument.

In 2020, during the COVID-19 pandemic, police in Chinu, Colombia, placed residents who broke quarantine in stocks for a few hours. 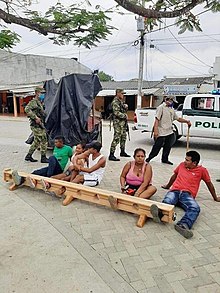 In 2020, during the COVID-19 pandemic, police in Chinu, Colombia, placed residents who broke quarantine in stocks 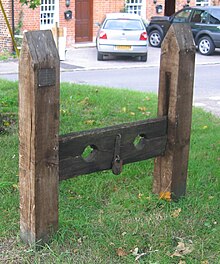 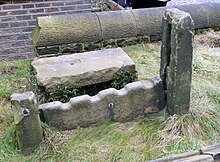 An excellent example of stocks can be seen in Dromore, County Down, in Northern Ireland. They are occasionally preserved in churches though as wooden devices they are naturally subject to rotting and decay.