Table of Contents ⇨
This article is about the district. For its eponymous headquarters, see Patiala.
District in Punjab, India

Patiala district is one of the twenty two districts in the state of Punjab in north-west India. 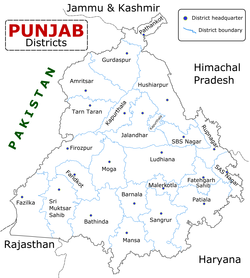 Districts of Punjab along with their headquarters

Patiala District lies between 29 49’ and 30 47’ north latitude, 75 58’ and 76 54' east longitude, in the southeast part of the state. It is surrounded by Fatehgarh Sahib, Rupnagar and Mohali to the north, Fatehgarh Sahib and Sangrur districts to the west, Ambala, Panchkula, Haryana to the north east and Kurukshetra districts of neighbouring Haryana state to the east, and Kaithal district of Haryana to the south west.

Baba Ala Singh (1691–1765), a Sikh chieftain from village Rampura Phul in Bathinda District of Punjab, with his army of young brave men migrated to Barnala where Baba Ala Singh in 1763 set up his new state. Later Baba Ala Singh moved to a small village of Lehal where he built a new city on the village, naming it as Patiala. He laid the foundations of a steady and stable state known as Phulkian Dynasty south of Sirhind. In and around Patiala District he founded many villages within his territory, and reconstructed many historical Gurdwaras relating to Sikh religion.

It was since Baba Ala Singh's time that Patiala District came into being as before the area was under the Sirhind Government. Baba Ala Singh made Sirhind, Tohana, Mansa, Bathinda, Sangrur and Barnala, Fatehabad District part of Patiala State.

In 1809 Patiala State came under British protection during the reign of Maharaja Sahib Singh (1773–1813) of Phulkian Dynasty, as he feared that Maharaja Ranjit Singh of Lahore would cross the Sutlej river and take the district and state so the Patiala rulers got the British to protect them from further invasion from 1809-1947 Patiala remained under British Protection. In 1948 Patiala Princely State was abolished by the Indian government.

Patiala district population mainly follows Sikhism with a lesser number of Hindus and smaller numbers of Christians and Muslims.

Patiala having a population of 1,895,686 is the 4th most populated district of the Punjab after Ludhiana, Amritsar and Jalandhar as per the 2011 census.

This district contains many small hill ranges which are part of the Shivalik Hills.

There are nine Punjab Vidhan Sabha constituencies located in this district: Patiala Urban, Patiala Rural, Rajpura, Nabha, Samana, Ghanaur, Shutrana, Sanaur, and Patran. [1] All of these are part of Patiala Lok Sabha constituency. [2]

Patiala is fast emerging as an important industrial growth centre on the industrial map of the state. Besides traditional goods, high quality and sophisticated items are now produced including small cutting tools, power cables, Vanaspati ghee, bicycles and agriculture implements including harvester combines and threshers, milk products, and pesticides. The industrial units are scattered all over the district mainly at Rajpura, Patiala, Samana and Nabha. There are large and medium industrial units located at Rajpura producing Vanaspati ghee, power cables, bicycles and bicycle components and at Dera bassi producing spun-yarn and alcohol. Among the small scale industry in the district are those producing agriculture implements, rice shellers, cutting tools, electrical goods and bakeries. There are industrial focal points at Patiala, Rajpura, Nabha and Dera bassi and two industrial estates at Rajpura, Patiala.

Most of the area is plains in the form of agricultural land. The river Ghaghar remains dry during most part of the year. However, during the rainy season, it often causes flooding the adjoining villages, which results in damage to the crops, livestock and human lives. Other subsidiary rivers are Tangri Nadi, Patiala-Wali-Nadi, Sirhind Choe and the Jhambowali Choe.

Apart from the natural water lines, the Bhakra Main Line canal, the Nawana Branch, and the Ghaghar Link are the most important. These canals are the backbone of the irrigation system of the district.