The Marlborough Region ( Māori: Te Tauihu-o-te-waka, or Tauihu), commonly known simply as Marlborough, is one of the regions of New Zealand, located in the northeast of the South Island. Marlborough is a unitary authority, both a region and a district. Marlborough District Council is based at Blenheim, the largest town. The region has a population of 48,800 (June 2018) [1].

Marlborough is known for its dry climate, the Marlborough Sounds, and Sauvignon blanc wine. It takes its name from the earlier Marlborough Province, which was named after His Grace General The 1st Duke of Marlborough, an English general and statesman. [3]

Marlborough's geography can be roughly divided into four sections. The south and west sections are mountainous, particularly the southern section, which rises to the peaks of the Kaikoura Ranges. These two mountainous regions are the final northern vestiges of the ranges that make up the Southern Alps, although that name is rarely applied to mountains this far north.

Between those two sections is the long straight valley of the Wairau River. This broadens to wide plains at its eastern end, in the centre of which stands the town of Blenheim. This region has fertile soil and temperate weather, which has enabled it to become the centre of the New Zealand wine industry.

See also: List of rivers of the Marlborough Region

Statistics New Zealand estimates the population at as of June 2019. The region is home to 1.0% of New Zealand's population. [4] 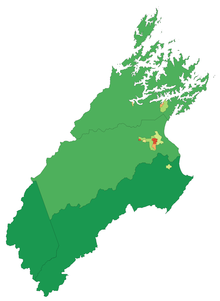 Population density of Marlborough as of the 2006 census 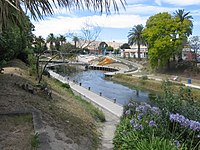 Other towns and settlements include:

The sub-national gross domestic product (GDP) of the Marlborough region was estimated at NZ$3.02 billion in 2017, 1.1% of New Zealand's national GDP. The three largest contributors to the region's GDP in 2018 were manufacturing ($519m), agriculture and horticulture ($357m), and other primary industries ($276m). The regional GDP per capita was estimated at $65,084 in 2017, the third-highest regional GDP per capita in New Zealand, behind Wellington and Taranaki. [8]

Marlborough has 25,045 hectares of horticultural land as of 2017, the second-largest area in New Zealand behind Canterbury. Wine grapes make up 23,050 hectares of that area, with sweetcorn and peas being the only other crops with more than 100 hectares planted area. [9] 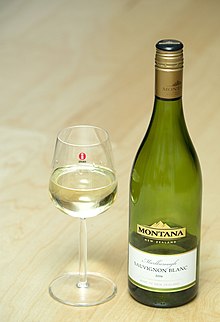 The Marlborough climate has a strong contrast between hot sunny days and cool nights, which extends the ripening period of the vines. This results in more intense flavour and aroma characters in the wine. The first commercial vineyards were planted around Blenheim in 1973, and Marlborough subsequently grew to become New Zealand's largest and most internationally well-known wine-producing region. [10] Due to this growth, particularly in the export market, the Marlborough wine region now produces three quarters of all New Zealand wine. [11] The most important varietal is Sauvignon Blanc, which is recognised as world class; wine writers Oz Clarke and George Taber have described Marlborough's Sauvignon Blanc as the best in the world. [12] [13] Also important is the production of méthode traditionelle sparkling wine made from Chardonnay and Pinot Noir, which has attracted investment from large Champagne producers Mumm, Deutz, Moët & Chandon and Veuve Clicquot. [14]

Marlborough is administered by a unitary authority, the Marlborough District Council. Between 1859 and 1876 Marlborough had its own provincial government, and was known as the Marlborough Province, which ended when the Abolition of the Provinces Act came into force on 1 November 1876. [15]

The Marlborough District Council consists of a mayor and 13 councillors. The councillors are elected from three wards: seven from the Blenheim ward, and three each from the Marlborough Sounds and Wairau-Awatere wards. The mayor is elected at-large. Elections are held every three years in conjunction with nationwide local elections, with the next election on 12 October 2019.

A combined District and High Court at Blenheim serves the region judicially. [19]

The Main North Line railway serves the region, running roughly parallel so State Highway 1. The first section of the line in Marlborough opened on 18 November 1875 between Blenheim and Picton. The line south of Blenheim opened to Seddon in October 1902, to Ward in April 1911, and to Wharanui in December 1915. The line finally opened across the present-day Marlborough border in October 1942 when the line was extended to Clarence. The entire line through to Christchurch opened on 15 December 1945 when the railheads met at Kaikoura. [21] Today, the line is used by the Coastal Pacific passenger train, which operates one return journey per day during the summer months. The line is also heavily used by freight trains between Christchurch and the Cook Strait rail ferry at Picton.

Port Marlborough at Picton is the region's main seaport. Interislander and Bluebridge both operate roll-on-roll-off ferry services between Picton and Wellington.