Al-Kūt ( Arabic: الكوت‎ Al Kūt), also spelled Kut al-Imara or Kut El Amara, is a city in eastern Iraq, on the left bank of the Tigris River, about 160 kilometres (99 miles) south east of Baghdad. As of 2018 [update] the estimated population is about 389,400 people. It is the capital of the province long known as Al Kut, but since the 1960s renamed Wasit.

The old town of Kut is within a sharp "U" bend of the river, almost making it an island but for a narrow connection to the shore. For centuries Kut was a regional center of the carpet trade. The area around Kut is a fertile cereal grain growing region. The Baghdad Nuclear Research Facility, looted following the 2003 invasion of Iraq, is located near Kut.

In 1952, 26,440 hectares (65,300 acres) were irrigated from water provided by the Gharraf Canal. Of this newly reclaimed land, 14,080 hectares (34,800 acres) was distributed to small farmers as part of a social land reform program. These farmers received 10 hectares (25 acres) per family and were required to live on the land they farmed. In 2005, repairs and maintenance works were carried out at the Kut Barrage and the Gharraf Head Regulator for a total cost of US$3 million.

Kut has a hot desert climate (BWh) in the Köppen–Geiger climate classification system. Most rain falls in the winter. The average annual temperature in Kut is 23.4 °C (74.1 °F). About 138 mm (5.43 in) of precipitation falls annually.

The siege of Kut 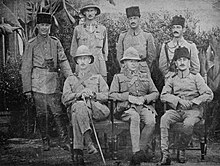 Townshend, Khalil Pasha and other unidentified officers after surrender of the Kut garrison in 1916

Kut was the scene of a fierce battle during World War I. The British Mesopotamian Expeditionary Force, led by General Townshend, marched north from Basra in September 1915 in what became known as the Mesopotamian Campaign. They reached Kut on September 26, where after three days of fighting they drove the Ottoman forces from the town.

After a halt of nearly 9 months, Townshend then headed up river to Ctesiphon. Following a battle there, the British forces withdrew back to Kut. On December 7, 1915, the Turks, under their commander, the German Field Marshal Baron von der Goltz, arrived at Kut and began a siege. The British cavalry under Colonel Gerard Leachman succeeded in breaking out, but Townshend and the bulk of the force remained besieged. Many attempts were made to relieve Townshend's forces, but all were defeated. Some 23,000 British and Indian soldiers died in the attempts to retake Kut, probably the worst loss of life for the British away from the European theater. Near the end of the siege, T. E. Lawrence and Aubrey Herbert of British Intelligence unsuccessfully tried to bribe Khalil Pasha to allow the troops to escape. Townshend, with some 8,000 surviving soldiers, finally surrendered Kut on April 29, 1916. The captured soldiers were divided, where the officers were sent to separate facilities, and many of the enlisted soldiers were impressed into hard labour until the surrender of the Ottoman Empire; more than half of them died. The British went back on the offensive in December 1916 with a larger and better-supplied force under General Sir Frederick Stanley Maude and retook Kut on February 23, 1917.

Contingency Operating Base (COB) Delta was an American military installation located on the right bank of the Tigris directly across from Kut.

Designated as a Forward operating base (FOB) in the early stages of Operation Iraqi Freedom, Delta was centered on a former Iraqi Air Force base, Kut Al Hayy Air Base, which was known after capture as Blair Airfield. [2] In 2005 Delta was selected to become an "enduring" FOB, remaining open after other FOBs had closed. [3] During the U.S.Military's Iraqi Freedom Campaign,FOB Delta was primarily manned by multi-national forces, Polish, Kazakhstan, El Salvadorian, Georgian, Lithuanian, British, and U.S. Forces, with U.S. forces operating as command and control. Sometime after 2009 the FOB was re-designated as a COB. [4] COB Delta was closed on October 24th 2011 and officially turned over to the IAF in a handover ceremony that afternoon in the main flight line hangar/terminal. Later that evening, approximately 2200, the last Force Pro civilians flew out by helicopter. At that time the last remaining US forces departed the main hangar and drove out of the south gate headed toward Kuwait under cover of darkness.