Kozelets ( Ukrainian: Козелець [kozeˈlɛtsʲ]; Russian: Козелец) is an urban-type settlement in Chernihiv Oblast ( province) of northern Ukraine. It is the administrative center of Kozelets Raion. Kozelets is located on the Oster River, a tributary of the Dnieper. Population: 8,142 (2015 est.) [1]

The town was first mentioned in written documents in 1098, but its status as an urban-type settlement (a step below that of a city) was granted in 1924. [2]

Notable attractions in the city includes the Cathedral of the Nativity of the Blessed Virgin designed in the Ukrainian Baroque style by architects Ivan Hryhorovych-Barskyi and Andrei Kvasov. Kozelets also houses several local food industries, and a veterinary technicum. [3]

Kozelets was first mentioned in 1098 as a fortified town in the East Slavic state of Kievan Rus'. [3] During times of the Polish-Lithuanian Commonwealth, Kozelets was known by the name Kozlohrad ( Ukrainian: Козлоград). 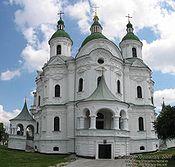 In the beginning of the 17th century, Kozelets was an important regional trade center. [4] The town was also a sotnia town in the Pereiaslav and Kiev Regiment of the Cossack Hetmanate during the 17-18th centuries. [5]

In 1656, Kozelets was granted the Magdeburg rights. The Kozelets Cossack Rada elected Yakym Somko as the Hetman of the Cossacks in 1662. [6] [7] After the Tatar invasion of 1669, Kozelets was partially destroyed.

In 1744 Empress Elizabeth of Russia stayed in Kozelets while making a pilgrimage to Kiev. [8]

The city also served as a regional center of the Kiev, Malorossiya, and Chernigov Governorates of the Russian Empire during the 18-19th centuries. [3] At the end of the 19th century, Kozelets's population was 5,420. [9]

After the breakup of the Russian Empire leading to the Russian Civil War, Kozelets became a part of the Soviet Union. In 1924, its status as a city was removed and given that of an urban-type settlement. During World War II, the Nazi Einsatzgruppen executed 125 of the towns's Jews, a population which numbered 2,000 before the war. [10] [11]

The cathedral's hand-crafted iconostasis was made in Italy.

Being a regimental Cossack town, Kozelets has some important architectural monuments. This includes the Regimental Chancellery Building (the current town hall), the Darahan Mansion complex, the Saint Michael's Church (built in 1784) and the Ascension Church (1864–66). [3]

The town's main cathedral and architectural attraction is the Cathedral of the Nativity of the Blessed Virgin. The cathedral was built in the mid-18th century in the late Ukrainian Baroque style by architects Ivan Hryhorovych-Barskyi and Andrei Kvasov. [12] [13] Funds for the construction of the cathedral were provided by Alexey and Kyrylo Rozumovsky (the latter was appointed Hetman in 1750). [13]