From Wikipedia
https://en.wikipedia.org/wiki/Inde
For the tribe of Native Americans that use the name Indé to describe themselves, see Apache. For the country, see India.
River in Belgium and Germany

The Inde ( French: L'Inde) is a small river in Belgium and in North Rhine-Westphalia, Germany.

The Inde in Weisweiler

The Inde is a left (western) tributary of the Rur/Roer, in eastern Belgium and in North Rhine-Westphalia, western Germany.

Its source is near Raeren, in Eastern Belgium. The Inde runs through Aachen-Kornelimünster, Eschweiler, and Inden. Its mouth is on the Rur near Jülich. Because of lignite opencast mining, a section of the course was diverted near Inden-Lamersdorf in 2003 . 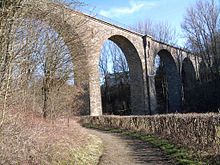 Its name is of Celtic origin: Inda. The Inde has a counterpart, a "small Inde", in France: the Andelle, which is a 55-kilometre (34 mi) long river in the French département Seine-Maritime and whose original name was Indella.
The suffix -ella is an example for Celtic river names comparing for instance Mosella (= Moselle, i.e. "small Mosa (= Maas)"). For the name "Inde", the Indoeuropean stem *wed (= water) is supposed, like in words like Italian "onda" and French "onde" (= wave).[ citation needed]

The Inde acquired historical importance when Emperor Louis the Pious founded the Kornelimünster Abbey monastery along one of its old courses in 815.