From Wikipedia
(Redirected from Diet of porvoo)
https://en.wikipedia.org/wiki/Diet_of_porvoo 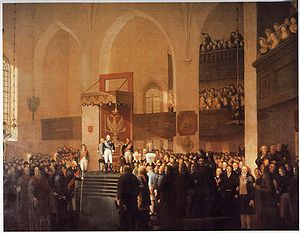 The Porvoo Diet is opened by Alexander I

The Diet of Porvoo ( Finnish Porvoon maapäivät, or unhistorically Porvoon valtiopäivät; [1] Swedish Borgå lantdag) [2], was the summoned legislative assembly to establish the Grand Principality of Finland in 1809 and the heir of the powers of the Swedish Riksdag of the Estates. The session of the Diet lasted from March to July 1809. 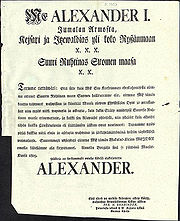 The sovereign's pledge, printed in Finnish

During the Finnish War between Sweden and Russia, the four Estates of Russian occupied Finland (Nobility, Clergy, Burghers and Peasants) were assembled at Porvoo (Borgå) by Tsar Alexander I, the new Grand Prince of Finland, between 25 March and 19 July 1809. The central event at Porvoo was the sovereign pledge and the oaths of the Estates in Porvoo Cathedral on 29 March. Each of the Estates swore their oaths of allegiance, committing themselves to accepting the Emperor as Grand Prince of Finland as the true authority, and to keeping the constitution and the form of government unchanged. Alexander I subsequently promised [3] to govern Finland in accordance with its laws and let the Finnish keep their religion and rights. This was thought to essentially mean that the emperor confirmed the Swedish Instrument of Government from 1772 as the constitution of Finland, although it was also interpreted to mean respecting the existing codes and statutes. [4]

The diet had required that it would be convened again after the Finnish War, which separated Finland from Sweden, had been concluded. On 17 September, the conflict was settled by the Treaty of Fredrikshamn but it would be another five decades until the Finnish Estates would be called again.

During the rise of Finnish nationalism later in the 19th century, it was claimed that the Diet implied that a Treaty between states had been signed at the Diet between Finland and Russia. According to Emeritus Professor Jussila of Helsinki University, it is true that Alexander said that Finland had been raised to the status of a nation among nations, but the claim of a treaty between equals was simply a device invented for the political realities of the struggle for independence.

Diet had participants from different estates as follows: [5]

Out of 205 noble families 130 were not represented in the diet, and 60 of the representatives did not attend the opening ceremony. The burghers were mainly represented by merchants. [6]


DIET OF PORVOO Latitude and Longitude: