The provincial capital is the city of Artvin. 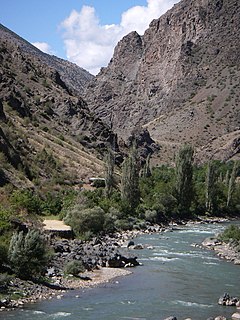 Artvin is an attractive area of steep valleys carved by the Çoruh River system, surrounded by high mountains of Kaçkar, Karçal and Yalnızçam (up to 3900 m) and forest with much national parkland including the Karagöl-Sahara, which contains the Şavşat and Borçka lakes. The weather in Artvin is very wet and mild at the coast, and as a result is heavily forested. This greenery runs from the top all the way down to the Black Sea coast. The rain turns to snow at higher altitudes, and the peaks are very cold in winter. [2]

The forests are home to brown bears and wolves. The Çoruh is now being dammed in 11 places for hydro-electric power, including the 249 m Deriner Dam and others at Borçka and Muratlı.

In addition to the vast majority[ citation needed] ethnic Turks, the province is home to communities of Laz people and Hemshin peoples. Autochthonous Muslim Georgians form the majority in parts of Artvin Province east of the Çoruh River. Immigrant groups of Georgian origins, found scattered in Turkey are known as Chveneburi. [3] In particular, there is a prominent community of Chveneburi Georgians many of them descendants of Muslim families from Georgia who migrated during the struggles between the Ottoman Turks and Russia during the 19th century. With such diverse peoples, Artvin has a rich variety of folk song and dance (see Arifana and Kochari for examples of folk culture). [4]

Artvin is traversed by the northeasterly line of equal latitude and longitude. 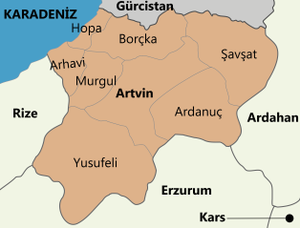 Districts of the Province of Artvin.
Central district also has the same name just like most provinces in Turkey.

In 1924, the Liva Sanjak was abolished and the Artvin Vilayet was created. Artvin Vilayet was combined with Rize to form Çoruh Vilayet with the capital at Rize. Later it was separated into Artvin Province with the districts of Ardanuç, Arhavi, Artvin, Borçka, Hopa, Murgul, Şavşat and Yusufeli. [6]

Artvin province is divided into 8 districts (capital district in bold):