The Aro Valley forms a small inner-city suburb of Wellington in New Zealand. It takes its name from the stream which originally flowed where modern Epuni Street is. [2] The stream's Māori name was originally Wai-Mapihi, but it was commonly called Te Aro Stream due to it running through the Te Aro flat. [2]

The Aro Valley is 126 hectares running between the hills of Brooklyn to the south, Kelburn to the north, with the area of Karori to the west and Te Aro, the city centre to the east.

Much of Wellington consists of the remnants of an old peneplain, a flat expanse that rose from the sea about 20 million years ago. This land was heavily dissected by watercourses from that time and today the tops of the hills around Wellington indicate the general height of that eroded peneplain. [3] During this time massive faults appeared that are still active today.

Aro Valley formed from fault activity. One kilometre to the west of Aro Valley is the Wellington Fault running north-east along the foot of the Tinakori Hills and beyond. A series of splinter faults branch off from the Wellington Fault. Activity along these faults over millions of years caused tilting of the land to create valleys, including Aro Valley, south-east of the main fault.

Aro Valley, and its tributary valleys, are well sheltered from the wind and have soil enriched by past alluvial deposits. The valley walls are steep in places and house sites are correspondingly uneven, in typical Wellington fashion.

The valley comprises part of the bed of the Wai-Mapihi Stream. Aro Street runs through the whole valley, from Willis Street in the east to Raroa Road in the west; major side-streets include Devon Street, Epuni Street, Adams Terrace, Mitchelltown's Holloway Road and Taitville's Norway Street. 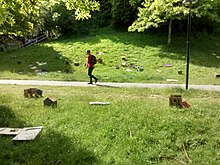 A prominent feature of Aro Valley is Aro Park, which is the site of the former Matauranga School, which was itself on the site of the original Catholic school – St Mary of the Angels. The Park was formerly known as Seed's Hill after an early (1864) resident, Mr. Wm. Seed. [4] The Park has been extended and landscaped in recent years and is a focus for community recreation, especially on summer nights and weekends; the Aro Valley Community Centre stands on part of the park.

in 2017 Wellington Council purchased a considerable area of land to the north west boarder of Aro Park which will form part of the Wellington Town Belt. [5]

Aro Valley is almost surrounded by parkland the Aro Park to the north, Polhill Gully Recreation Reserve to the Northwest and Tenera Reserve & Central Park to the Southeast.

Polhill Reserve on the western end of Aro Street, which is meant to have been named for an early Cornish (Cornwall in the UK) surveyor. In the mid-1840s a garrison of British troops was stationed on the upper ridges of this Gully, to protect the southern flank of the settlement from hostile Maori. The force grew to some 200 officers and men by 1845/6. By 1870 British troops had left the country, to encourage colonial 'self reliance'. In the early 1900s the gully, sometimes referred to as Polhill's Gully contained a man made reservoir.

By the 1960s Victoria university's were considering Polhill Gully and Holloway Road as potential sites for its own expansion and began buying houses but by the 1970s the plans were being actively challenged by a new generation of Mitchelltown residents who felt the houses and the neighbourhood were worth saving, and by others who envisaged the restoration of Polhill Gully for wildlife habitat and recreational use. Discussion, disagreement and protest went on for years, and the university finally abandoned its plans in the early 1980s. Polhill Gully became a City Council Recreation Reserve in 1989.

Today the reserve is an attractive amenity used by more than a thousand cyclists, runners and walkers a week. It is also frequented by birds, including—thanks to the proximity of the Zealandia wildlife sanctuary—many tui and kaka, and the occasional bellbird, grey warbler, North Island robin and saddleback.

The Aro Valley today is a largely untouched remnant of old Wellington, with the majority of its dwellings dating from the first two decades of the twentieth century, and a significant number from the nineteenth. The Wellington City Council notes: "The Valley projects a strong sense of place due to its geographical separation from other parts of the city, the enclosure of the valley walls and the relative consistency of development within." [6]

Early tribal occupants of the Aro Valley included Ngāti Mutunga, Ngāti Ruanui, Muaūpoko and Ngāti Mamoe. In the 1830s Taranaki iwi Te Āti Awa settled at its western end. The stream itself was an important food source for Māori. It was called Waimapihi – in Maori, "the stream or bathing place" of Mapihi, a local chieftainess of Muaūpoko and Ngāti Mamoe descent. [7] These small communities adapted as best they could to the influx of British settlers that began in 1840, but they took a blow in 1855 when an earthquake raised the low-lying land draining the marshes and cutting off their main source of both food and flax for trading. This misfortune, combined with widespread illness, migration back to Taranaki to settle land disputes, and pressure from settlers for land, gradually saw the Māori population of Te Aro dwindle.

The land was part of the New Zealand Company purchase in 1839. It was first developed by settler Wellingtonians as a working-class residential suburb in around 1860, [2] the Aro Valley featured small, narrow sections with closely built wooden or corrugated-iron houses.

In the 1840 Plan of Wellington, the Aro Valley consisted of Wordsworth, Aro and Epuni Streets, as well as St John Street, which connected Aro Street and what became known as The Terrace. Of the 13 freehold acres available for European settlers, nine were in Epuni Street. European settlement grew as Maori left the area, including Te Āti Awa who returned to Taranaki in the 1850–60s. Also, in 1855, the opening of the Old Bullock Track meant the valley became an access route for Karori settlers. The only other route to Karori followed what is now Glenmore Street from Thorndon.[ citation needed]

Devon Street in the north of Aro Valleys principal developer, William Adams and Elizabeth Adams, came from the Southern UK county of Devon. He purchased land here in 1885 and some of the houses built were occupied by his son and daughter in law Maxwell and Lila Adams.

The opening of the William Booth Memorial Training College in 1914 (now Philosophy House).

A route of the Wellington tramway system was opened in 1904, connecting Aro Street to the Wellington railway station via the city center; it closed in 1957. [2]

In the 1960s, The Evening Post described Holloway Road (a street originally known as Mitchelltown on the western edge of Aro Valley) as "sagging stairways with most of the tread rotted away", leading to "sagging, open doors and damp, musty rooms where glass from broken windows crunches underfoot". [8]

Gentrification has been ongoing in Aro Valley from the 1970s, boosted by urban-renewal planning (the Comprehensive Urban Renewal Area or CURA) after the rejection of a proposal to turn the valley into a main arterial road route: it became a desirable suburb, seen as close to the centre of Wellington and boasting notable community spirit. The Aro Valley Community Council was established in 1978 and was followed by the building of the Aro Valley Community Center. [2]

In 1974, the Aro Street public toilets were the scene of a Russian spy drama, [8] when economist, historian and writer Bill Sutch was caught and charged with attempting to pass classified information to the Soviet Union. (Sutch was later acquitted.) [11]

The area's heritage value derives from the fact it contains the largest collection of unaltered working-class homes in Wellington, some built by local tradesmen for employees, many put up by professional builders and developers as speculative investments. Many of the buildings used as shops along Aro Street and a number of houses on Aro Street and Holloway Road are protected by designation on Wellington City Council Heritage List. [12]

Aro Valley also adjoins parts of Victoria University (mainly to the north), and a large number of Valley residents study there or at Massey University to the east. Despite the gentrification sometimes known as "yuppification" of the suburb, it keeps its reputation as a home to politico-social radicals. The area has a strong community council campaigning on a variety of issues such as eliminating plastic bag use in local shops. [13]

Alexandra Hollis writes in Salient that "although Aro is this liberal, artsy enclave, it is also very aware of this reputation." [14] Illustrating this artiness young film-makers based in Wellington in the late 90s and 2000 were dubbed the Aro Valley movement, they made feature-length narrative dramas, which they edited and assembled on computer editing suites. [15]

Aro Valley Pre-School is a licensed early childhood education centre in a purpose-built building situated next to the Aro Valley Community Centre and Aro Park. The pre-school caters to children aged three and four years old, with some younger children attending accompanied by their parents. Once a week they also facilitate a parent-led playgroup for children under three. [23]

The School of Practical Philosophy on Aro Street