Table of Contents ⇨
This article is about the city. For other uses, see Anzio (disambiguation).
Comune in Lazio, Italy

Well known for its seaside harbour setting, it is a fishing port and a departure point for ferries and hydroplanes to the Pontine Islands of Ponza, Palmarola and Ventotene. The city bears great historical significance as the site of Operation Shingle, a crucial landing by the Allies during the Italian Campaign of World War II. 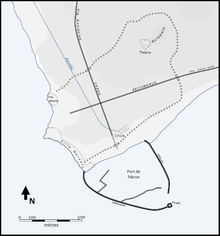 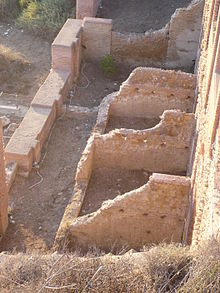 Library of the imperial villa

Mosaico from the nymphaeum

Anzio occupies a part of the ancient Antium territory. In ancient times, Antium was the capital of the Volsci people until it was conquered by the Romans. In some versions of Rome's foundation myth, Antium was founded by Anteias, son of Odysseus.

In 493 BC the Roman consul Postumus Cominius Auruncus fought and defeated two armies from Antium and as a result captured the Volscian towns of Longula, Pollusca and Corioli (to the north of Antium). [6]

In 464 BC the Antiates were suspected of allying with the Aequi against Rome. The chief men of Antium were summoned to Rome however they gave adequate explanations. Antium was asked to contribute emergency troops for the Roman war against the Aequi, however the force of 1,000 troops from Antium arrived too late to help. [8]

With the expansion of Rome it was just far enough away to be insulated from the riots and tumults of Rome. Leading Romans built magnificent seaside villas there and when Cicero returned from exile, it was at Antium that he reassembled the battered remains of his libraries, where the scrolls would be secure. Remains of Roman villas are conspicuous all along the shore, both to the east and to the north-west of the town. [9] Gaius Maecenas also had a villa. Many ancient masterpieces of sculpture have been found there: the Fanciulla d'Anzio, the Borghese Gladiator (in the Louvre) and the Apollo Belvedere (in the Vatican) were all discovered in the ruins of villas at Antium.

Of the villas, the most famous was the imperial villa, known as the Villa of Nero, [9] which was used by each Emperor in turn, up to the Severans and which extended some 800 metres (2,600 ft) along the seafront of the Capo d'Anzio. Augustus received a delegation from Rome there to acclaim him Pater patriae ("Father of his Country"). The Julian and Claudian emperors frequently visited it; both Emperor Caligula and Nero were born in Antium. Nero razed the villa on the site to rebuild it on a more massive and imperial scale including a theatre. Nero also founded a colony of veterans and built a new harbour, the projecting moles of which still exist. [9]

There are records of the participation of a few bishops of Antium in synods held in Rome: Gaudentius in 465, Felix in 487, Vindemius in 499 and 501. Barbarian incursions in the 6th century put an end to its existence as a residential bishopric. Accordingly, Antium is today listed by the Catholic Church as a titular see. [10]

In the Middle Ages Antium was deserted in favour of Nettuno, which maintained the legacy of the ancient city. At the end of the 17th century Innocent XII and Clement XI restored the harbour, not on the old site but to the east of it, with the opening to the east, a mistake which leads to its being frequently silted up; it has a depth of about 5 metres (16 ft). The sea is encroaching slightly at Anzio, but some kilometres farther north-west the old Roman coast-line now lies slightly inland (see Tiber). The Volscian Antium stood on higher ground and somewhat away from the shore, though it extended down to it. This was defended by a deep ditch, which can still be traced, and by walls, a portion of which, on the eastern side, constructed of rectangular blocks of tufa, was brought to light in 1897. [9] In 1857 Pope Pius IX founded the modern municipality (comune) of Anzio, with the boundaries of Nettuno being redrawn to accommodate the new town.

Anzio and Nettuno are also notable as sites of an Allied forces landing and the ensuing Battle of Anzio during World War II. The Commonwealth Anzio War Cemetery and Beach Head War Cemetery are located here.

In February 1944 American soldiers (the U.S. Fifth Army) were surrounded by Germans in the caves of Pozzoli for a week, suffering heavy casualties. A film based on the events called Anzio (1968, directed by Edward Dmytryk) was made, starring Robert Mitchum and based on a book by Wynford Vaughan-Thomas. 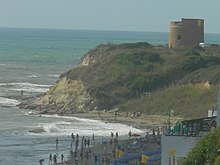 On 18 February 1944, the British light cruiser Penelope was struck by two torpedoes off the coast of Anzio and sunk with a loss of 417 crew.

In the same region Lieutenant Eric Fletcher Waters of the British Army lost his life in battle while serving as a member of the 8th Battalion, Royal Fusiliers (City of London Regiment), part of the 167th (London) Infantry Brigade of the 56th (London) Infantry Division which fought at Anzio for nearly six weeks. His son, Roger Waters, became the bassist and main lyricist of progressive rock band, Pink Floyd. In his honour and remembrance Roger Waters recorded the song " The Fletcher Memorial Home", which is the maiden name of Eric Waters' mother. (Also see " When the Tigers Broke Free".)

Statue of Nero in Anzio by Claudio Valenti (2010).

Along the coast are numerous remains of Roman villas. One, the Domus Neroniana, has been identified as a residence of Nero.

In Anzio can be found the Anzio War Cemetery, located close to the Communal Cemetery and Beachhead Museum. The Beach Head War Cemetery is located 5 Kilometre north on the No207 Road. The Sicily-Rome American Cemetery and Memorial is in nearby Nettuno.

About 8 kilometres (5 miles) north of the town there is a WWF park with sulphur springs and a medieval tower, Tor Caldara.

Near the ruins of the Villa of Nero, in scenic position near the beach, lies the military sanatorium of the Italian army, one of the most important works of Florestano Di Fausto, built in 1930–33.

All along the coast a large number of beaches and sea resorts can be found, including hotels and the famous fish restaurants of the port of Anzio. The city once hosted a Casino called Paradiso sul mare that is no longer active and now hosts cultural events. In the southern part of the town, close to the border with Nettuno, are many Italian art nouveau style houses.

Anzio is connected to Rome by the Via Nettunense (SS207), the Via Ardeatina (SS601) and by the Roma-Nettuno railway that connects Anzio with Roma Termini in around 1 hour. [11] The railway line also stops in the stations of Padiglione, Lido di Lavinio, Villa Claudia, Marechiaro, Anzio Colonia to the north of Anzio.

Anzio is twinned with: