From Wikipedia
(Redirected from Alibaug)
https://en.wikipedia.org/wiki/Alibaug 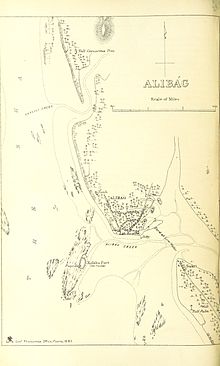 Alibag is a coastal town and a municipal council in Raigad District of Maharashtra, India. It is the headquarters of the Raigad district and is south of the city of Mumbai. Alibag is part of Mumbai Metropolitan Region and is situated at a distance of about 96km from Mumbai and 143km from Pune.

Alibag and its surrounding villages are the historic hinterland of Bene Israeli Jews. There is a synagogue in the "Israel Ali" (Marathi इस्राएल आळी meaning Israel lane) area of the town. [1] A Bene Israelite named Ali used to live there at that time. He was a rich man and owned many plantations of mangoes and coconuts in his gardens. Hence the locals used to call the place "Alichi Bagh"(Marathi for "Ali's Garden"), or simply "Alibag", and the name stuck. [1]

Alibag houses a magnetic observatory which was set up in 1904. [2] It serves as one of the significant observatories forming part of a global network now run by Indian Institute of Geomagnetism. The observatory has two buildings; the first building has magnetometers that record changes occurring in the geomagnetic fields. The second building consists of precision recording instruments, which give data about geomagnetic storms caused by solar storms which is shared with other countries. [2]

Ca/Na ratio is mostly between 0.5 and 0.7, while the same seawater ratio is -0.038. Khemani's results for Alibag, Colaba, and Thane will give values of about 0.5,0.5 and 0.8 respectively (Khemani, 1974), which is indeed very close to the current ratio. Junge&Werby (1968) illustrated the excess Ca in the precipitation of the United States to the rainfall of Ca from arid regions. As our samples were not fully exposed during the actual rainfall, we retained the interpretation until further work was carried out. However, some excess calcium (perhaps 10-15%) may come from the ocean itself. Fairbridge(1966) also stated that tropical oceans have become over-saturated in terms of CaCO. So Nair et al. Ca. In some parts of the Arabian sea, values range from 470 to 1,000 PPM, representing higher values for coral reefs. [3]

The nearest rail railway station is at Pen. Through Pen, it is connected to Panvel and onwards to Mumbai and the Indian Railways network. Now pen-panvel trains are also started from 4 November 2018 now it is easier to reach alibag easily.

The nearest jetty is Mandwa from where catamaran/ ferry services are available to the Gateway of India, Mumbai. Another port in the vicinity is Rewas, from where a ferry service is available to Ferry Wharf (Bhau cha Dhakka) (Dockyard Road). There is a jetty at Custom Bandar from where fishermen in Alibag set sail.

Ferry service between Mandwa and Gateway of India, Mumbai. They run at a frequency of an hour throughout the year from morning 6 to evening 6, except during monsoon.

One can reach Alibag by catamaran through Gateway of India to Mandwa or from Bhaucha Dhakka to Rewas and from Mandwa/Rewas to Alibag by bus. Ticket includes journey from Gateway to Mandwa and bus journey from Mandwa to Alibag bus stop. The well known operators of these catamarans are PNP, Maldar and Ajanta and tickets can be purchased at their booth at the Gateway of India. From Rewas to Alibag one needs to take State Transport bus or a rickshaw. Take the ferry from Gateway to Mandwa. Services are usually available from 6:00am till 6:00pm. The trip takes 40 to 55 minutes depending on the type of boat. From Mandwa operators carry passengers to Alibag in their own chartered buses. The bus journey time is 45 minutes. Alibag beach is walking distance from the bus-stop.

Another option is to take a ferry from "Bhaucha Dhakka" to Rewas. Timings are the same but schedule may change depending on the tide. From Rewas take state transport bus or rickshaw to Alibag.

Speedboats from the Gateway of India to Mandwa Jetty take roughly 20–25 minutes depending on the weather and can be hired at the Gateway of India at Jetty No. 5 opposite the Taj Mahal Hotel. The new jetty installed in 2014 at Mandwa ensures safety of guests traveling by speedboat.

The nearest airport is in Mumbai which is 140 km away by road. Alibag has no airport.

Notable people born in Alibag include:

The following are the main tourist attractions in and around Alibag: