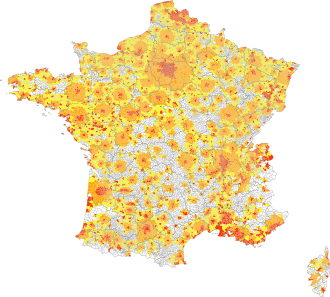 Map of France indicating its commune municipalities. The colours show the urban organisation status of each municipality in 2010 :

An aire urbaine (literal and official translation: "urban area" [1]) is an INSEE (France's national statistics bureau) statistical concept describing a core of urban development and the extent of its commuter activity.

The aire urbaine is built from France's nationwide interlocking administrative commune municipalities: when a commune has over 2000 inhabitants and contains a centre of dense construction (buildings spaced no more than 200 metres apart), it is combined with other adjoining communes fulfilling the same criteria to become a single unité urbaine ("urban unit" [2]); if an urban unit offers over 10,000 jobs and its economical development is enough to draw more than 40% of the population of a nearby municipalities (and other municipalities drawn to these in the same way) as commuters, it becomes a pôle urbain ("urban cluster" [3]) and the "commuter municipalities" become its couronne ("rim" [4]), but this only on the condition that the urban unit itself is not part of another urban cluster's rim. The aire urbaine is an urban cluster and its rim combined, or a statistical area describing a central urban core and its economic influence on surrounding municipalities.

As of 2010, depending on their population and function, aires urbaines adopt the following secondary appellations:

One of the first words used was the word agglomération, which was first used to deal with a group of people. The word was used, for instance, in a law from 5th April 1884 (loi du 5 avril 1884), in which Article 98 gives the mayor police power (pouvoirs de police), meaning authority over the city, but only within the agglomération. That law was used as a legal precedent in 1907 to forbid a mayor from setting a speed limit on the road next to a farm, considering that at that time, a group of houses inside a farm might be an agglomération, but the road next to it was not inside the agglomération. [9] [10].

Later, in the 1920s, the concept of agglomération was used in the code de la route (Highway code) to define specific law within or outside of such a zone.

In 1968, the French word agglomération was introduced in the French version of the Vienna Convention on Road Traffic in the place where the English word built-up area was used in the English version of the same treaty. In this treaty, the word is only defined as a concept signalled by an entry sign and an exit sign, while still allowing members of the treaty to have different definitions.

Nowadays, words with an English origin or meaning tend to be introduced into the French language as loanwords, in order to describe new concepts, words or meanings, or to replace old words. Such words include: aire urbaine (urban area); métropole (metropolis); agglomération (agglomeration); communauté urbaine (urban community); Grand + the name of a city ( Grand Paris, Grand Toulouse).

As a member of the European Union and the OECD, for statistical purposes, France may need to consider the regions inside or outside of the limits of an urban area.

Between 2006 and 2011, Toulouse, Rennes, Montpellier, Nantes, Bordeaux and Lyon had the fastest-growing metropolitan areas in France.