Afula ( Hebrew: עֲפוּלָה, Arabic: العفولة‎) is a city in the Northern District of Israel, often known as the "Capital of the Valley" due to its strategic location in the Jezreel Valley. In 2018, the city had a population of 51,737. [1]

Afula is mentioned first around 19th century BC as "Ofel" in the Execration texts. [2]

During the Ottoman era, in the 18th century, there was a small Arab village el-'Afuleh or Affule, in this region. [3] The modern name may be derived from the name of this village, possibly originating in the Canaanite-Hebrew root ofel ("fortress tower"), [4] or the Arab word for "ruptured". [5] 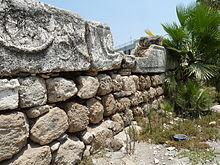 Remains of Crusader fortress in Afula. Note the spolia; Roman sarcophagi as the top layer.

Afula is possibly the place Ophlah, mentioned in the lists of Pharaoh Thutmose III. [6] Afula has been identified with the ancient Israelite town of Ofel mentioned in the Hebrew Bible. [7] With the destruction of the Kingdom of Israel, the area continued to be inhabited, and excavations have revealed artifacts from the periods of Persian and Roman rule. Conder suggested that Afula was identical with Kirjath Ophlathah, a place inhabited by Samaritans in the 7th century. [8]

An ancient mound or tell known as Tel 'Afula, located in the heart of modern Afula, suggests almost continuous habitation from the late Chalcolithic period to the Ayyubid period in the 13th century. It contains the remains of a fortress from the Crusader and Mamluk periods. A fortified Crusader tower, 19 meters square, stands in the center. The lower four courses are made of rough boulders, while the top remaining layer is made of reused Roman sarcophagi. The wall is a total of 5.5 meters tall. Pottery remains indicate that it was occupied in the twelfth and thirteenth century. [9] For older finds from Tel 'Afula see the Archaeology paragraph.

A map by Pierre Jacotin from Napoleon's invasion of 1799 showed this place, named as Afouleh in a French transliteration of the Arabic. [11]

In 1816, James Silk Buckingham passed by and described Affouli as being built on rising ground, and containing only a few dwellings. He noted several other nearby settlements in sight, all populated by Muslims. [12]

In 1838, Edward Robinson described both Afuleh and the adjacent El Fuleh as "deserted". [13] [14] William McClure Thomson, in a book published in 1859, noted that Afuleh and the adjacent El Fuleh, were "both now deserted, though both were inhabited twenty-five years ago when I first passed this way." Thomson blamed their desertion on the bedouin. [15]

In 1875 Victor Guérin described Afula as a village on a small hill overlooking a little plain. The houses were built of adobe and various other materials. Around the well, which Guérin thought was probably ancient, he noticed several tubs of broken sarcophagi serving as troughs. [16] In 1882, the Palestine Exploration Fund's Survey of Western Palestine described El Afuleh as a small adobe village in the plain, supplied by two wells. [6]

A population list from about 1887 showed that el Afuleh had about 630 inhabitants; all Muslims. [17] Gottlieb Schumacher, as part of surveying for the construction of the Jezreel Valley railway, noted in 1900 that it consisted of 50-55 huts and had 200 inhabitants. North of the village was a grain stop, belonging to the Sursocks. [18]

In 1909 or 1910, Yehoshua Hankin completed his first major purchase in the Jezreel Valley. He bought some 10,000 dunams (10 km²) of land in Al-Fuleh (now Afula), which became the home of two moshav settlements, Merhavia and Tel Adashim. [19]

During the First World War, Afulah was a major communications hub.

With the advance of General Edmund Allenby's British forces into Ottoman Palestine, el-Afulah was captured by the 4th Cavalry Division of the Desert Mounted Corps, during the cavalry phase of the Battle of Sharon in September 1918.

In 1925, modern Afula was founded after the American Zionist Commonwealth completed a purchase of the Afula valley from the Sursuk family of Beirut. A quarter of the one hundred Arab families who had lived in the area accepted compensation for their land and left voluntarily; the remainder were evicted. [19] [22] Jews began settling in Afula shortly after as the town developed.

During this time, the community was served by the Jezreel Valley Railway, part of the larger Hejaz Railway. Since 1913 it had also been the terminus station of the branch connecting it to Jenin and later also to Nablus. Sabotage actions of Jewish underground militias in 1945, 1946 and shortly before the 1948 Arab–Israeli War rendered first the connection to Jenin, then progressively the entire Valley Railway, inoperable.[ citation needed] 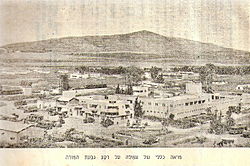 Repairs to the Jezreel Valley Railway after 1948 restored service to Haifa, but only until 1949 when it was abandoned. In 2011 construction began on a large-scale project to build a new standard gauge railway from Haifa to Beit She'an with stations in Afula and other towns, along roughly the same route as the historic valley railway. Israel Railways began passenger service on the new railway on October 16, 2016. [28]

Due to Afula's proximity to the West Bank, it has been a target for Palestinian political violence. [29] On 6 April 1994, the Afula Bus suicide bombing killed five people in the center of Afula. In the Afula axe attack in November 1994, a 19-year-old female soldier was attacked and murdered by an axe-wielding Arab militant. [30] Afula also was the target of a suicide attack on a bus on 5 March 2002, in which one person died and several others were injured at Afula's central bus station. In the Afula mall bombing on 19 May 2003, a woman suicide bomber blew herself up at the Amakim mall, killing three and wounding 70. This attack was claimed by the Palestinian Islamic Jihad and the Fatah movement's Al-Aqsa Martyrs Brigades.

On 17 July 2006, during the Israel–Hezbollah War, Hezbollah fired Katyusha rockets at Afula, one of the southernmost rocket attacks on Israel from Lebanon. Six people were treated for shock as a result of the attack. On 28 July, a rocket landed causing a fire. The rocket carried 100 kilograms (220 pounds) of explosives. [31]

In September 2016, it was announced that seven new neighborhoods would be built, doubling the city's population. [32]

Afula has a mediterranean climate ( Köppen climate classification: Csa). The average annual temperature is 20.4 °C (68.7 °F), and around 468 mm (18.43 in) of precipitation falls annually. 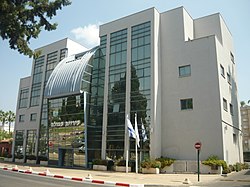 The Alon Tavor Industrial Zone is located northeast of Afula off Highway 65. The Tadiran air conditioner factory is located there. [34] Two Israeli plastics manufacturers, Keter Plastic and StarPlast, are also based there. [35] 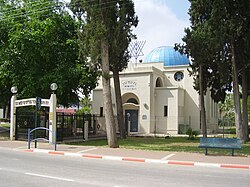 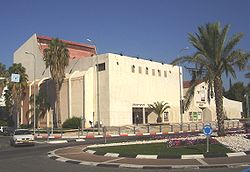 HaEmek Medical Center in Afula was the first regional hospital in the country. [4]

The ancient mound of Afula, known as Tel 'Afula, is close to the city center, west of Route 60 and south of Ussishkin Street. Very little of the initial six-acre tell remains due to construction work done in this area since the British Mandate period. The southern peak of the mound is the better preserved part. It was once widely considered to be the biblical site of Ophrah, the hometown of the judge Gideon, [36] but contemporary scholars generally disagree with this supposition. Archaeological finds date from the Chalcolithic through the Byzantine period, followed by remains from the Crusader and Mamluk periods.

The first excavations at Tel ‘Afula, carried out in 1948, found Late Chalcolithic–Early Bronze Age remains. Tombs from the Early Bronze Age, Middle Bronze Age II, Late Bronze Age–Iron Age I and Roman period were discovered near the municipal water tower. Archaeologists discovered the Crusader-Mamluk fortress on the southern peak of the tell, a Byzantine olive press and evidence of an Early Bronze Age settlement near the northern peak. [37]

From the 1990s, several small excavations unearthed an uninterrupted sequence of settlement remains from the Chalcolithic until the Late Byzantine periods as well as remains from the Mamluk period. [38]

In 2012, excavations were conducted by the Israel Antiquities Authority on the southern peak of Tel Afula where the Crusader-Mamluk fortress is located. Due to construction activity from the 1950s, settlement layers on the tell may have been destroyed. Only meager remnants were found, indicative of a settlement from Early Bronze Age I and the Roman period. Pottery from Early Bronze Age III, Iron Age I and a single Hellenistic Attic fragment indicate settlement on the tell in these periods. Fragments of glazed bowls from the thirteenth century were found along the southern edge of the excavation. [37] 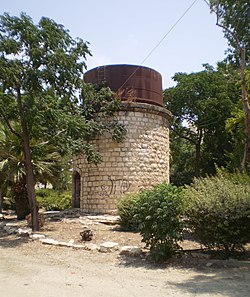