The season's circuit consists of 10 tournaments that generally begin in November or December and last until May. The venues are held across 10 countries, and visits five of the six populated continents. The United Arab Emirates, South Africa, Australia, New Zealand, the United States, Canada, Hong Kong, Singapore, France and England each host one event. Each tournament has 16 teams — 15 core teams that participate in each tournament and one regional qualifier.

Teams compete for the World Series title by accumulating points based on their finishing position in each tournament. The lowest placed core team at the end of the season is dropped, and replaced by the winner of the Hong Kong Sevens. New Zealand had originally dominated the Series, winning each of the first six seasons from 1999–2000 to 2004–05, but since then, Fiji, South Africa and Samoa have each won season titles. England and Australia have placed in the top three on multiple occasions, but neither has won the series. The International Olympic Committee's decision in 2009 to add rugby sevens to the Summer Olympics beginning in 2016 has added a boost to rugby sevens and to the World Sevens Series; this boost has led to increased exposure and revenues, leading several of the core teams to field fully professional squads.

The first international rugby sevens tournament was held in 1973 in Scotland, which was celebrating a century of the Scottish Rugby Union. [3] Seven international teams took part, with England defeating Ireland 22–18 in the final to take the trophy. The Hong Kong Sevens annual tournament began in 1976. [4] Over the next two decades the number of international sevens competitions increased. The most notable was the Rugby World Cup Sevens with Scotland hosting the inaugural event in 1993, [5] along with rugby joining the Commonwealth Games program in 1998.

The first season of the World Sevens Series was the 1999–2000 season. At the Series launch, the chairman of the International Rugby Board, Vernon Pugh, described the IRB's vision of the role of this new competition: "this competition has set in place another important element in the IRB’s drive to establish rugby as a truly global sport, one with widespread visibility and steadily improving standards of athletic excellence." [6] New Zealand and Fiji dominated the first series, meeting in the final in eight of the ten season tournaments, and New Zealand narrowly won, overtaking Fiji by winning the last tournament of the series. [6]

New Zealand won the first six seasons in a row from 1999–2000 to 2004–05, [7] led by players such as Karl Te Nana and Amasio Valence. The number of stops in the series varied over the seasons, but experienced a contraction from 11 tournaments in 2001–02 to 7 tournaments in 2002–03 due to the global recession. In the 2005–06 season Fiji clinched the season trophy on the last tournament of the season finishing ahead of England. [8] New Zealand regained the trophy in 2006–07 season in the last tournament of the season. [9]

South Africa was the next team to win the series after taking home the 2008–09 title. [10] In the 2009–10 season, Samoa who finished seventh the previous year shocked the world — led by 2010 top try-scorer and World Rugby Sevens Player of the Year Mikaele Pesamino — by winning four of the last five tournaments to overtake New Zealand and win the series. [11]

The 2011–12 season was the last to have 12 core teams as the 2011–12 series expanded to 15 teams that had core status. Qualification for these places was played out at the 2012 Hong Kong Sevens. Canada (returning to core status for the first time since 2008), [12] Spain and Portugal joined the 12 core teams for the next season. The Japan event also made a return for the first time since 2001 (lasting until 2015). New Zealand continued their dominance by finishing on top.

Argentina was originally planned to begin hosting a tenth event with Mar Del Plata the venue in the 2012–13 season, giving the tour an event on each continent, but when Argentina joined the Rugby Championship those plans were shelved. [13] [14] With the same schedule, New Zealand again were the winners over South Africa. They took it again in 2013–14 with Spain the first team to be relegated after finishing last during that season with Japan replacing them. [15]

Heading into the 2014–15 season, the top four teams qualifying to the 2016 Summer Olympics, with Fiji, South Africa, New Zealand and Great Britain all qualifying through. [16] The 2014–15 season and 2015–16 season were won by Fiji — the first time a team other than New Zealand won back-to-back season titles — led by 2015 and 2016 season Dream Team nominee Osea Kolinisau The two seasons also yielded teams winning their first tournaments — the United States won the 2015 London Sevens to finish the season in sixth overall; [17] Kenya won the 2016 Singapore Sevens, and Scotland won the 2016 London Sevens. [18] [19] Prior to the 2015–16 season World Rugby did a comprehensive review of all nine tournament hosts and adjusted the schedule, dropping two sites ( Japan and Scotland), and adding three sites ( France, Singapore and Canada) to the calendar.[ citation needed]

In the 2016–17 series, a dominant and consistent display by South Africa saw them reach the finals of the 2016–17 series rounds on eight occasions, winning five of these. As a result, South Africa were series champions with victory in the penultimate round in Paris. The season was a qualifier for the 2018 with the top four teams that hadn't already qualified, coming from this season. [20] The teams that made it through to the World Cup via this method were Canada, Argentina, Scotland and Samoa. [21]

The World Series has consisted of 10 tournament stops since the 2015–16 season.

Most of these tournaments began after they were added to the World Series, but with certain exceptions. The oldest running of these tournaments is the Hong Kong Sevens, which dates back to 1976. [4] Other tournaments that pre-date the Series include the Australia Sevens (which ran from 1986 to 1989 and was then disbanded, until it returned in the 1999–2000 season as a leg on the Series) and the France Sevens which began in 1996.

A group of 15 "core teams" is announced for each season, based on performances in the previous season, and each core team has a guaranteed place in all of that season's events. The core teams have been selected through a designated promotion/relegation process since the 2012–13 season. The core teams for the 2019–20 season are:

In 2019, World Rugby announced a plan to create a second tier competition that would allow the best thirteen sevens teams, with the addition of three invited teams, from their region to compete in a similar style format to the Sevens Series for the potential of gaining promotion to the World Rugby Sevens Series and becoming a core team. [32] This breaks from the usual format of promotion and relegation in the sevens series.

The proposal was well received from the Tongan rugby sevens team, whom will be one of the sixteen teams competing in the tournament. Coach Tevita Tu'ifua said about the news, "We are so excited and very happy and it is a blessing for us to get involved in any tournament for the sake of the rugby sevens programme back home." [33]

From 2020 onwards the style of promotion/relegation will be as such:

The World Series results are sometimes used as a qualifier for other tournaments. For example, the top four teams of the 2014–15 series automatically qualified for the 2016 Summer Olympics. Similarly, certain teams from the 2016–17 series qualified for the 2018 Rugby World Cup Sevens.

Summary of the top six placegetters for each series:

Tally of top six placings in the series for each team, updated after the 2018–19 season: [b]

Rugby sevens is a fast-paced version of rugby union with seven players each side on a full-sized rugby field. Games are much shorter, lasting seven minutes each half. The game is quicker and faster-scoring than 15-a-side rugby, which explains part of its appeal. It also gives players the space for superb feats of individual skill. Sevens is traditionally played in a two-day tournament format. Currently, in a normal event, 16 teams are entered.

In each tournament, the teams are divided into pools of four teams, who play a round-robin within the pool. Points are awarded in each pool on a different schedule from most rugby tournaments—3 for a win, 2 for a draw, 1 for a loss, 0 for a no-show. In case teams are tied after pool play, the tiebreakers are: [57]

As of the 2009–10 series, four trophies are awarded in each tournament. In descending order of prestige, they are the Cup, whose winner is the overall tournament champion, Plate, Bowl and Shield. Each trophy is awarded at the end of a knockout tournament.

A third-place match is now conducted between the losing Cup semifinalists in all tournaments; this was introduced for the 2011–12 series. [58]

In 2012–13, the season-ending London Sevens expanded to 20 teams, with 12 competing for series points and eight involved in the Core Team Qualifier. [56] With the promotion place now determined at the Hong Kong Sevens, the London Sevens returned to the traditional 16-team format in 2013–14.

The Hong Kong Sevens (an anomaly as a three-day event) is the most famous sevens tournament. The Hong Kong Sevens had 24 teams through the 2011–12 series, but has featured 28 teams since 2012–13, with 15 core teams and the winner of the HSBC Asian Sevens Series competing for series points. At the 2013 event, the remaining 12 teams were those in the World Series Pre-Qualifier; [56] from 2014 forward, the remaining 12 teams are those in the Core Team Qualifier. [15] In Hong Kong, the Shield was awarded for the first time in 2010. [59]

Originally, the six pool winners of the Hong Kong Sevens, plus the two highest-finishing second-place teams, advanced to the Cup.

In the transitional year of 2012, the Hong Kong Sevens was split into two separate competitions. The 12 core teams competed for the Cup, Plate and Bowl under a format similar to that of a regular event. The 12 invited teams all competed for the Shield, with the top three sides in that competition also earning core status for 2012–13.

From 2013 on, the four trophies in Hong Kong will be contested under the same format used in regular 16-team tournaments. Only the 15 core teams, plus the winner of the HSBC Asian Sevens Series, now compete in the main draw of that event although from 2017 the number of trophies was reduced to just the main Cup with the showpiece final being reduced from 20 minutes to 14 minutes and the Challenge Trophy which were in line with changes which began at the start of the 2016-17 World Rugby Sevens Series.

The season championship is determined by points earned in each tournament. World Rugby introduced a new scoring system for the 2011–12 series, in which all teams participating in a tournament are guaranteed points. Initially, World Rugby announced the new points schedule only for the standard 16-team events; the allocations for the Hong Kong Sevens were announced later. [58] A new scoring system was introduced in 2019-20 requiring teams to play for 7th, 11th and 15th places, previously teams had tied for 7th-8th 11th-12th and 15th-16th places.

The current points schedule used at each standard event is summarised below.

Tie-breaking: If two or more teams are level on overall series points, the following tie-breakers are used: [57]

The International Rugby Board reached a 5-year deal with HSBC in October 2010 that granted them status as the first-ever title sponsor of the Sevens World Series. Through the agreement, HSBC acquired title naming rights to all tournaments in the World Series, beginning with the Dubai Sevens on 3 December 2010. [2] HSBC has since sub-licensed the naming rights to individual tournaments, while retaining its name sponsorship of the overall series. A renewed, 4-year deal was announced before the 2015–16 Series, this deal was also expanded to include the World Rugby Women's Sevens Series. [65] 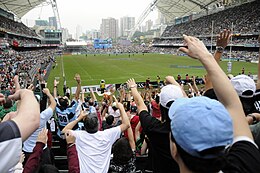 Players in bold are still active.