From Wikipedia
https://en.wikipedia.org/wiki/Winton,_Dorset Jump to search
Human settlement in England

Winton is a suburb of Bournemouth in Dorset, England (historically in Hampshire). [2] It lies approximately 1 mile (1.6 km) north of Bournemouth town centre, along Wimborne Road (the A347). Winton is to the east of Wallisdown, Victoria Park and Talbot Woods and south of Moordown.

The name Winton was derived from Wintoun Castle in Scotland, which was home to the Archibald Montgomerie, 13th Earl of Eglinton, a relative of the Talbot family: landowners who started the development of Winton.

At the beginning of the 19th century the area was just rough heathland, with just a track linking ancient Moordown Village to Horseshoe Common. In 1805 this all changed when a new main road through Winton was put in and named Muscliff Road (today it is known as Wimborne Road).

Around 1850 wealthy Scottish philanthropists Georgina and Marianne Talbot saw the plight of local workers and set about trying to improve their lives by purchasing land along the road and building four artisan cottages and sinking wells to provide fresh water. They founded Talbot Village.

By 1891 the population of Winton had reached 4,000 and by 1894 the needs of Winton were so great that they were put under the care of the Winton Parish Council and later in 1897 Winton Urban District Council was formed. In 1901 Bournemouth (which was by then a county borough) increased its boundaries to include Winton and other districts. [3]

Winton Recreation Ground is the only significant green space in an area of approximately one square mile, serving a population of 4750 people.

The idea of creating a public recreation facility for Winton was first envisaged in 1902. The Earl of Malmesbury gave nearly six hectares of suitable land to Bournemouth Borough Council in 1904. The official opening of Winton Recreation Ground took place in September 1906.

The cricket pavilion is over 90 years old and it was extended in 1962 and refurbished in 1999. 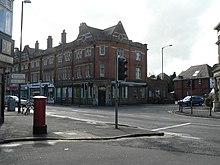 This busy road junction in Winton is called Winton Banks thanks to the many banks that surrounded this junction.

The picture (right) is close to where the Continental Cinema once stood. Opened in 1911 it started life as the Winton Hall and was renamed Winton Electric Picture House the following year. In 1930 it was modernised and renamed Plaza, becoming the first cinema in Bournemouth to show talking pictures[ citation needed]. After the war years it was again refurbished and renamed the Continental. [4] In 1978 it changed hands but the cinema took a downturn in the 1980s due to lack of maintenance and it ended its life in 1989 when it was demolished to build a pub.

The steep rise in Wimborne Road to the north of Kemp and Wycliffe roads, has been known locally for many years as Peter's Hill, with several stories circulating as to the origin of the name, the least fanciful would seem to be that the spire of Saint Peter's Church in Bournemouth could be glimpsed from the top of the hill. Evidence of the name dates to 1871, soon after Winton was formed, when Henry Vatcher a carter living with his wife two children and two lodgers, gives Peter's Hill as his address on the census.

Winton library was opened in 1907 and became Bournemouth's first permanent purpose-built library. It was built on land provided by landowner Lord Leven with financial support from Scottish-American philanthropist Andrew Carnegie. It was one of the first public libraries in the country to allow open access to the shelves; and it was here that Flora Thompson read the literature on which she based her literary career culminating in her autobiographical trilogy Lark Rise to Candleford.

The library has undergone a number of refurbishments during its lifetime, the most recent in 2006 when a computer suite was added.

Today Winton is still popular for shopping, including a regular farmers' market which takes place in Cardigan Road. The area has several striking buildings, such as Saint Luke’s Church, the old Fire Station on Peter’s Hill, what was the art-deco Moderne Cinema building, now known as the Lifecentre, having undergone a complete refurbishment maintaining the art-deco theme. The Edwardian library [5] in Wimborne Road.

Winton is also a popular area for students of Bournemouth University and The Arts University Bournemouth to live in, given its local amenities, bus connections to the town centre and proximity to Talbot Campus, the university's main site and the AUB campus.

Winton gets its own police station. It is established in a building built ten years earlier known as Hamilton towers.