For other people with a similar name, see William Daley (disambiguation)

William Michael Daley (born August 9, 1948) is an American lawyer, politician and former banker. [1] He served as White House Chief of Staff to President Barack Obama, from January 2011 to January 2012. [2] He also served as U.S. Secretary of Commerce, from 1997 to 2000, under President Bill Clinton. [3] He has also served on the executive committee of JPMorgan Chase & Co. [2] Daley was a candidate for Governor of Illinois in the 2014 gubernatorial election, until dropping out of the race on September 16, 2013. He ran in the 2019 Chicago mayoral election [4] but came in third in the first-round voting, and did not advance to the runoff. He served as the Vice Chairman of BNY Mellon from June through October 2019. Effective November 13, 2019, Daley will serve the Wells Fargo Vice Chairman of Public Affairs. [5]

He was born in Chicago, Illinois, the seventh and youngest child of the late Chicago Mayor Richard J. Daley and Eleanor "Sis" Daley. He is the brother of former Illinois legislator John P. Daley and former Chicago mayor Richard M. Daley. [6]

Bill Daley was U.S. Secretary of Commerce from 1997-2000. Among other things, Secretary Daley helped usher in the age of E-commerce, ran the 2000 census, expanded minority business development programs, and oversaw a wide range of economic initiatives during one of the strongest economic periods in American history, adding an estimated 23 million jobs. Daley stepped down to run Al Gore's campaign for President in 2000. [12]

In December 2001, following his service as U.S. Secretary of Commerce under President Clinton, he was appointed to a newly created position as President of SBC Communications to help reform the company's image. [13] In May 2004, Daley was appointed Midwest Chairman of JPMorgan Chase, [2] following its acquisition of Bank One Corporation. In 2007, Daley was appointed as head of the Corporate Responsibility program, a position he held until 2010. [14] Daley formerly served on the Board of Directors of Boeing, Merck & Co., Boston Properties, and Loyola University Chicago. He is currently a trustee of Northwestern University and is a member of the Council on Foreign Relations. In 2010, he received the Chicago History Museum "Making History Award" for Distinction in Civic Leadership. In 2014, he joined Argentiere Capital as a managing partner. [9]

Bill is married to Bernadette Keller. He has four children. Today,[ when?] his three adult children and three grand-daughters all live in Chicago. Bill Daley has worked in law, telecommunications, finance and government. [12][ dead link]

On November 7, 2019, it was announced that Daley had been appointed to serve as head of Public Affairs at Wells Fargo effective November 13, 2019, and will also serve as one of the company's Vice Chairman. [15]

In 1993, he served as Special Counsel to the President on issues relating to the passage of the North American Free Trade Agreement (NAFTA). [16]

Daley resigned as commerce secretary to become general chairman of Vice President Al Gore's presidential campaign, replacing Tony Coelho. [17] He was portrayed in the HBO film Recount, about the Florida election recount of the 2000 presidential election, by actor Mitch Pileggi.

During the 2008 Democratic presidential primaries, Daley was a prominent supporter of Barack Obama. On November 5, 2008, Daley was named to the advisory board of the Obama-Biden Transition Project. [18]

President Obama welcomes Daley (left) as the new Chief of Staff in January 2011.

On January 6, 2011, President Barack Obama named Daley as his next White House Chief of Staff, and he took office on January 13, 2011. Daley succeeded Rahm Emanuel, who served as Chief of Staff during the first two years of the President's term and left the position in October 2010 to run to succeed Daley's brother as Mayor of Chicago, and Pete Rouse, who was serving as the interim Chief of Staff.

In March 2011, speaking for the Obama administration on Meet the Press, Daley said the administration will consider using the Strategic Petroleum Reserve if rising oil prices caused by Arab Spring threaten the U.S. economy. Daley said Obama "is very concerned; we're trying to look at all the possible options." He repeated the administration's stance that there is enough output capacity in the world to deal with any disruptions from Libya. [19] 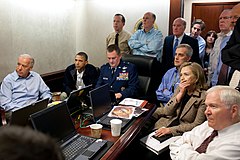 Daley, upper center-right, standing with the U.S. national security team gathered in the Situation Room to monitor the progress of Operation Neptune Spear.

Daley was photographed in the White House Situation Room photograph taken on May 1, 2011, by Pete Souza. Later in May 2011, he was part of the Presidential State Visit to the United Kingdom. [20]

On January 9, 2012, it was announced that Daley would resign as Obama's Chief of Staff. [22] Jack Lew was announced as his successor.

Just after the 2012 presidential election, in the November 8, 2012, issue of the Chicago Tribune, Daley was reported as considering a run in the 2014 election for Governor of Illinois. Daley said "I've thought about it before and I don't take it off the table. I think right now, to be very frank with you, the last thing in the world anybody wants to hear about is a race that's two years down the road." Daley further was quoted as saying: "I'm not closing the door and, I know that sounds like a politician, but the fact of the matter is that these are tough days and I think there's a lot to be done by the Legislature. I don't think it helps right now for people to be out there saying they're going to run and they have a solution at this point. I think we've got to see what the Legislature does."[ citation needed]

On June 10, 2013, Daley announced via YouTube that he would launch an exploratory committee to run for Governor of Illinois. On July 2, 2013, New York Mayor Michael Bloomberg endorsed Daley for governor. On July 30, 2013, Daley filed documents declaring himself an official candidate to challenge incumbent Governor Pat Quinn in the 2014 Democratic primary. On September 16, 2013, Daley made a surprise announcement that he was exiting the race due to the personal hardships inherent in running a campaign for elected office. [23]

After the election, Bill Daley served as co-chair of the transition team for the incoming Rauner Administration. [24]

In 2018, Daley served as the head of finances for the campaign of gubernatorial candidate Chris Kennedy. [25]

After two-term mayor Rahm Emanuel announced he would not seek reelection, it was reported on September 14, 2018, that Daley would run for mayor of Chicago. [26]

Daley was one of four mayoral candidates (alongside Gery Chico, Susana Mendoza, and Toni Preckwinkle) that had political ties to Alderman Edward M. Burke, whose corruption scandal upended the race for mayor. [27] [28] [29] [30] However, Daley's ties were weaker than the other three, and thus, he was perceived to have suffered the least amount of damage from the scandal of the four. [30]

Daley ran a weaker field operation than some other candidates did. [33]

In the last several weeks of the campaign, Daley began to rise in the polls. [33] However, he also began to be the subject of attack ads run by the union-affiliated Fight Back for a Better Tomorrow Super PAC. [33] At the end of the election campaign, polls showed Daley having strong prospects of finishing near the top of the field. [30]

Daley placed third in the election, failing to advance to the runoff. The margin between him and second-place finisher Toni Preckwinkle was 6,979 votes. [34] [35]