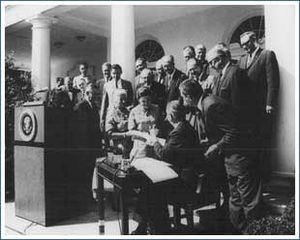 The Wilderness Act of 1964 ( Pub.L.  88–577) was written by Howard Zahniser of The Wilderness Society. It created the legal definition of wilderness in the United States, and protected 9.1 million acres (37,000 km²) of federal land. The result of a long effort to protect federal wilderness and to create a formal mechanism for designating wilderness, the Wilderness Act was signed into law by President Lyndon B. Johnson on September 3, 1964 after over sixty drafts and eight years of work.

The Wilderness Act is well known for its succinct and poetic definition of wilderness:

"A wilderness, in contrast with those areas where man and his own works dominate the landscape, is hereby recognized as an area where the earth and its community of life are untrammeled by man, where man himself is a visitor who does not remain." - Howard Zahniser

When Congress passed and President Lyndon B. Johnson signed the Wilderness Act on September 3, 1964, it created the National Wilderness Preservation System. The initial statutory wilderness areas, designated in the Act, comprised 9.1 million acres (37,000 km²) of national forest wilderness areas in the United States of America previously protected by administrative orders. The current amount of areas designated by the NWPS as wilderness totals 757 areas encompassing 109.5 million acres of federally owned land in 44 states and Puerto Rico (5% of the land in the United States).

Wilderness Act land is chosen from existing federal land and by determining which areas are considered to have the following criteria:

Additionally, areas considered as wilderness should have no commercial enterprises within them or any motorized travel (e.g.; vehicles, motorcycles). [1]

When Congress designates each wilderness area, it includes a very specific boundary line in statutory law. Once a wilderness area has been added to the system, its protection and boundary can be altered only by Congress.[ citation needed]

The basics of the program set out in the Wilderness Act are straightforward:

When the Wilderness Act was passed, it ignored lands managed by the Bureau of Land Management because of uncertainty of policy makers surrounding the future of those areas. The uncertainty was clarified in 1976 with the passing of the Federal Land Policy and Management Act, which stated that land managed by the Bureau of Land Management would remain federally owned and, between March 1978 and November 1980, would be reviewed to possibly be classified as wilderness. [2]

Some argue that the criteria to determine wilderness are vague and open to interpretation. For example, one criterion for wilderness is that it be roadless, and the act does not define the term roadless. Wilderness advocacy groups and some agency bureaucrats have attempted to impose this standard: "the word 'roadless' refers to the absence of roads that have been improved and maintained by mechanical means." [3] For more information, see Revised Statute 2477.

Congress considers additional proposals every year, some recommended by federal agencies and many proposed by grassroots conservation and sportsmen's organizations. [5]

In 2014, America celebrated "50 Years of Wilderness", and Wilderness50, a growing coalition of federal agencies, non-profit organizations, academic institutions, and other wilderness user groups has been created to document this historical commemoration honoring America's "True American Legacy of Wilderness." [6]

A series of projects and events were held to commemorate the 50th year of the Wilderness Act, including community museum, airport and visitor center displays; National website and social media campaign; Smithsonian photography exhibition; Washington D.C. Wilderness Week in September, and the National Wilderness Conference.