James Wickersham (August 24, 1857 – October 24, 1939) was a district judge for Alaska, appointed by U.S. President William McKinley to the Third Judicial District in 1900. He resigned his post in 1908 and was subsequently elected as Alaska's delegate to Congress, serving until 1917 and then being re-elected in 1930. He was instrumental in the passage of the Organic Act of 1912, which granted Alaska territorial status, introduced the Alaska Railroad Bill, legislation to establish McKinley Park, and the first Alaska Statehood Bill in 1916. He was among those responsible for the creation of the Alaska Agricultural College and School of Mines, which later became the University of Alaska. A residence hall on the University of Alaska Fairbanks campus is named in his honor.

Wickersham was born near Patoka, Illinois and moved in 1883 with his wife, Deborah, to Tacoma, Washington Territory, where he became a judge. While in Tacoma he helped lead a mob which forced the city's Chinese population out of town, and was later arrested as one of the "Tacoma Twenty-Seven," though he was never convicted. He was a member of the Tacoma Academy of Science and was President of that organization in 1893. He presented a paper to the Academy on 6 Feb, 1893, entitled, Is it Mount Tacoma, or Rainier? During the presentation the "following prominent Indians representing the Puyallup, Nesqually and Klickitat tribes were seated on the platform: George Leschi, son of Quiemuth, a leader in the Indian war of 1855; Jack Simmons; John Hiaton, one of the patriarchs of the reservation, 80 years of age, and a signer of the treaty of 1854; Mrs. John Hiaton and John Powers". The presentation has been reproduced by a digital file created at the Library of Congress. [1]

When Wickersham set off for Alaska he was allegedly dodging a government posting in Japan, and he told anyone who asked that he preferred the Eagle post, saying he "yearned for the Yukon, not Yokohama". [2] With the introduction of federal oversight in the form of three district court judges, Wickersham being one of the two new appointees, his peers being Arthur H. Noyes in Nome and previously established Melville C. Brown in Juneau, he was now one of the three most powerful people in Alaska, with no one within 3,000 miles to overrule his decisions or stand in his way. After the Nome Gold Conspiracy involving prominent Republican National Committee member Alexander McKenzie, it was Wickersham they turned to clean up the legal mess left by then ousted Judge Noyes, allegedly involved. [3] Through his hard work, and his tenacity, he made sure everyone understood his authority. His start into Alaskan official law was a litigation of most profound simplicity, and the epitome of Alaskan frontier spirit. "Chief Charley, head of the Charley River band of the Tena Indians, was the first litigant to appeal to the new court officials for justice." [2] Someone from upriver had stolen his dog, a very serious offense that warranted violence if this new American law official could not have it solved within his power peacefully. After being given the run around, Charley finally reached Wickersham and consulted the highest court in the land. After listening carefully Wickersham appointed a deputy to retrieve the stolen animal, and waited with the chief for his return, chatting about everyday problems. [2] When the dog was safely returned two points were driven home, the concrete authority of Judge Wickersham, and that his tenure in Alaska would be one of action.

As the most powerful personage of Federal oversight for the vast majority of the interior of Alaska, Wickersham was an important man to have on your side. His relationship with the development of Fairbanks helped shape not only the future of the Interior's steadily expanding city, but also the shape of things to come for the state. Wickersham's working relationship with Captain E.T. Barnette led to the initially small settlement developing into a city that became a gateway to the arctic. Through Barnette and Wickersham's efforts, Fairbanks became incorporated, initiated federal development, and settled locations for key federal positions in the city thus insuring its future relevance. [4]

Though they worked well together for the betterment of Alaska, and particularly the interior, they did not always have the best personal relationship. When presiding over one of Barnette's many gold claim cases, he inferred that if the case went in his favor, Wickersham could benefit from the decision himself after his term was over. "It was an outright bribe." [5] Quoted one historian. Personal opinions and ever changing allegiances aside, as far as the future of Fairbanks went, Barnette could always count on Wickersham to have his back as what Barnette wanted usually was what was best for Fairbanks. As Wickersham finished up his time as judge, he moved on to represent Alaskas' interests in Washington.

From the position of the judge on the trail in Alaska, Wickersham successfully ran for the position of congressional delegate for the District of Alaska in 1908 beginning his term in 1909. In his first two terms as delegate, Wickersham focused on two aspects: territorial status for Alaska and trust-busting the Alaska Syndicate. 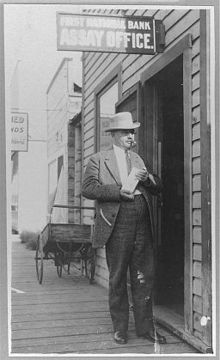 The issue of home-rule in Alaska falls under the popular idea that Alaska had been neglected by the United States federal government since its purchase from Russia in 1867 and was denied any form of self-government. The first semblance of self-government came through the First Organic Act in 1884. This act instated "…a governor, judge, attorney, clerk of court, marshal, four deputy marshals, and four commissioners, who were to function as justices of the peace." [6] Mainly as a reactionary to the huge population increase during the Klondike gold rush, these government offices were not voted in by Alaskans, but appointed by the president and confirmed by the Senate each for a four-year term. This act also moved Alaska from simply a purchased piece of property ruled by the U.S. military to the status of District. However, the Organic Act of 1884 was simply a start to government in Alaska and it still left the control of Alaska's resources to the federal government and largely, outside private interests.

The Alaska Syndicate, a conglomeration of privately owned businesses headed by Guggenheim interests, represented outside rule of Alaska's resources. Their main focus was "…the development of copper, holdings. It was for this purpose that it acquired and operated transportation lines." [7] Thus, the Alaska Syndicate not only ruled the copper fields but the steamship lines that moved the copper back to the United States. When Wickersham became the Delegate for Alaska, he vowed to relinquish the Alaska Syndicate's hold on copper and transportation.

One of the first issues that brought the Alaska Syndicate and Wickersham into battle was over Wickersham's first attempt to create a territorial legislature in 1909. According to Wickersham's first bill as delegate, "it provided for a legislature of twenty-four members – eight in the Senate and sixteen in the House." [8] However, President Taft believed that Alaska was not ready for territorial government and status. For the Alaska Syndicate, this brought relief. Those interested in Alaska's resources had opposed Wickersham due to the fear of industry taxes on their copper holdings if Alaska progressed to territorial status, or even worse, statehood.

Only two years later in Wickersham's second term as delegate, the home-rule bill passed as the Second Organic Act in 1912 establishing Alaska officially as a United States territory with a legislature. While Congress still maintained heavy control over the territory, it allowed Wickersham to move against the Alaska Syndicate. Continuing on the forward momentum of the Second Organic Act, Wickersham sought, "…congressional authorization for a federal railroad in Alaska.". [9] While this again would bring more government control to Alaska, it did mean that the Guggenheim hold on transportation would be severely weakened. In order to see this bill passed in the senate, Wickersham stood for over five hours delivering a speech to Congress, at that time the longest speech on record. His effort was not wasted and "the bill passed the Senate on January 24 by a vote of 46 to 16." [10]

Wickersham would go on to serve several more terms as Alaska's delegate to Congress, his last term running from 1931-1933. His time as delegate began major political themes in Alaska's history that still hold today. Alaska exists on the paradoxical theory of demanding state rule over its resources and yet still incredibly dependent on the federal government largely through, presently, the investment of the Department of Defense. Wickersham's dilemma began this mindset of federal dependence because he saw that as a better alternative than having private interests and "Robber-Barons" ruling over Alaska's resources.

The Democratic nominee was a Fairbanks lawyer and one-time mayor, Thomas A. Marquam. As the rally got underway, Judge Wickersham warmed to his subject and the walls of the Liberty Theatre virtually shook to the thunder of his denunciations. Most of his vituperation was couched in such eloquent language that the audience didn't know exactly what Marquam was being called — but by the tone they figured it was something pretty bad...It was years later that I found out that Judge Wickersham merely was calling Marquam a loud-talking Irishman.

Wickersham made the first recorded attempt of Mt. Denali (first Dinmore's Mountain, then Mt. McKinley). Departing from Fairbanks May 16, 1903, on the Tanana Chief steamer with two mules, Mark and Hannah. There were four companions that joined him on the trip: George Jeffrey, Mort Stevens, Charlie Web and John McLeod. To finance the venture the men published the first Tanana region Newspaper "The Fairbanks Miner, Vol. 1, No.1, May, 1903", eight pages typed up on a typewriter.

On the second day of being on the steamer, Wickersham's party had a stroke of luck and discovered a boat drifting through the river ice flow. The team dubbed Wickersham the Admiral of the newly named Mudlark and used the boat while traversing the Kantishna River. By June 4 the excursion party had staked Gold Claims on Chitsia Creek, and thanks to a map with description filed at Rampart, led to larger prospecting for the Kantishna Mining.

The trip took a turn of misfortune when the party came to an impassable mountain face, later known as Wickersham Wall. It was June 20 Wickersham wrote in his diary "...and have reluctantly concluded there is no possible chance of further ascent from this side of Denali at this season--or any other season for that matter."

Even more defeating for the party, is a wreck of their raft in a glacial stream on the descent that destroys their food supply and equipment. Hungry, tired, and terrorized by mosquitoes the group "happily ended the first attempt of white men...to scale the mighty walls of Denali." [12] ... The first attempted summit of Denali took place in 1903. The mountaineer was Judge James Wickersham. He attempted to climb the mountain via Peters Glacier and the North Face, but he fell far short of his goal. The route Wickersham tried to ascend wasn’t accomplished until 1963 due to avalanche dangers. The summit he attempted is now known as Wickersham’s Wall.

Wickersham Dome, 3,207 feet, between Fairbanks and Livengood was named after the former judge and congressman. [13]