Westminster is a city in northern Maryland, United States. A suburb of Baltimore, it is the seat of Carroll County. [5] The city's population was 18,590 at the 2010 census. [6] Westminster is an outlying community within the Baltimore-Towson, MD MSA, which is part of a greater Washington-Baltimore-Northern Virginia, DC-MD-VA-WV CSA.

William Winchester (1706-1790) purchased approximately 167 acres of land called White's Level in 1754 [7] which became known as the city of Winchester. The Maryland General Assembly later [8] changed the name of the town to Westminster to avoid confusion with Winchester, the seat of nearby Frederick County, Virginia. [9] [10] [11]

On June 28, 1863, the cavalry skirmish known as Corbit's Charge was fought in the streets of Westminster, when two companies of Delaware cavalry attacked a much larger Confederate force under General J.E.B. Stuart, during the Gettysburg Campaign.

In April 1865, Joseph Shaw, newspaper editor, had his presses wrecked and his business destroyed, and was subsequently beaten and stabbed to death by four men in Westminster, allegedly because of an anti- Lincoln editorial that was published the week before the actual assassination. In a later trial at the Westminster Court House the four men were acquitted; the reason cited was "self-defense".

Just north of Westminster is the farm at which Whittaker Chambers hid the so-called "pumpkin papers."

A historic marker states that Westminster was the first place in the nation to offer Rural Free Delivery postal service.

Westminster is the birthplace of Sargent Shriver (1915–2011), the Democratic candidate for Vice President of the United States in 1972, and the first director of the Peace Corps.

On March 10, 2006, members of the Westboro Baptist Church picketed the funeral of Matthew A. Snyder who had been killed in the Iraq War. Church members stood on city property adjoining St. John Catholic Church where the funeral took place. Snyder's father sued the church for violating his privacy. The United States Supreme Court in March 2011 ruled in Snyder v. Phelps that church members had a free speech right to picket. [13]

On Friday, June 26, 2015 the City of Westminster lit the Westminster Fiber Network, the first community wide gigabit fiber to the premise network in the mid-Atlantic region. The City partnered with Ting Inc., a subsidiary of Tucows, to light the network and provide gigabit services.

Westminster lies in the humid subtropical climate zone, with hot and humid summers and cool winters with highly variable seasonal snowfall. Due to its elevation, distance from the Chesapeake Bay and urban heat island, temperatures in Westminster are often considerably lower than in Baltimore, especially at night.

There were 7,161 households of which 32.6% had children under the age of 18 living with them, 40.5% were married couples living together, 12.3% had a female householder with no husband present, 4.7% had a male householder with no wife present, and 42.5% were non-families. 35.5% of all households were made up of individuals and 16.6% had someone living alone who was 65 years of age or older. The average household size was 2.39 and the average family size was 3.12.

There were 6,420 households out of which 32.4% had children under the age of 18 living with them, 42.5% were married couples living together, 12.6% had a female householder with no husband present, and 41.4% were non-families. 34.2% of all households were made up of individuals and 14.5% had someone living alone who was 65 years of age or older. The average household size was 2.35 and the average family size was 3.05.

According to the City of Westminster, [22] the top employers in the city are:

The five largest employers just outside Westminster in Carroll County are:

The Hashawha Tower is a windmill in Westminster. It stands at the Hashawha Environmental Center. [23]

Westminster is home to McDaniel College, a small liberal-arts college; to the Civil Air Patrol's National Honor Guard Academy; and to Dream Flight School, an institution providing flight lessons at the local airport. 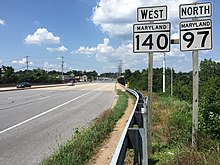 The main method of travel to and from Westminster is by road and four primary highways serve the city. The most prominent of these is Maryland Route 140, which follows an east-southeast to west-northwest alignment across the area. To the southeast, MD 140 connects to Baltimore, while northwestward, it passes through Taneytown on its way to Emmitsburg. Maryland Route 97 is the next most important highway serving the city, providing the most direct route southward towards Washington, D.C.. Two other primary highways, Maryland Route 27 and Maryland Route 31 provide connections to other towns in the area.

The Owings Mills station of the Baltimore Metro SubwayLink in nearby Owings Mills, Baltimore County, is a 20 minute drive by car from Westminster and provides subway access to downtown Baltimore. Due to longstanding opposition to mass transit from local residents and politicians, there is no inter-county bus or rail transit linking Westminster to nearby suburban communities of Baltimore County. [24] Due to a resolution passed by the Carroll County Board of Commissioners, the Carroll Transit System is prohibited from offering bus services into or out of the county. [25]