From Wikipedia
https://en.wikipedia.org/wiki/Westbourne,_Dorset Jump to search
Human settlement in England

Westbourne is an affluent residential and shopping area of Bournemouth, Dorset. It is located in between Branksome, Poole and the centre of Bournemouth, just off the main A338. Poole Road, mainly full of specialised shops and small cafes, runs through the centre Westbourne with Seamoor Road curving round bringing more shops and services. Many of the shops have residential property above them.

The area has become a fashionable and popular part of Bournemouth with a unique mix of clothing shops, cafés, restaurants and many other independent businesses. Westbourne has a reputation for being the fashion district of Bournemouth, which is supported by the many boutiques and home interior shops located in the main shopping area. The main high street of Westbourne includes a Victorian covered shopping arcade linking Poole Road and Seamoor Road. On 13 March 2007 a large M&S Simply Food replaced the Waitrose store which has recently moved to the Upper Parkstone area of Poole. There are several international language schools in Westbourne.

Until it was closed in 1965, Westbourne had a train station known as Bournemouth West Station Terminus. The station was often very busy during the summer seasons, as it was a main disembarkation point for holidaymakers to Poole and Bournemouth. Westbourne also had an ornate cinema called "The Grand", that was converted into a bingo hall. The bingo hall has since closed.

Westbourne is also home to the head office of the Liverpool Victoria Group which has three buildings, Frizzell House in the centre of County Gates roundabout, with Victoria and County Gates houses close by. It is a large local employer with around 1600 staff.

Many local traders are members of the Westbourne Traders Association (WTA). The group promotes the interests of the traders and aims to raise the profile of Westbourne to tourists and local residents. In May 2009, the WTA released a free map and business directory with distribution across the South coast. In 2011 a new campaign to promote Westbourne as a shopping and tourism destination was launched under the name 'Discover Westbourne'. A new website listing all shops and businesses in Westbourne was launched by the businesses at www.discoverwestbourne.co.uk.

In January 2010 a monthly community magazine was launched. [2] With local news, information, events and special offers, the magazine targets people who live, work and visit Westbourne. 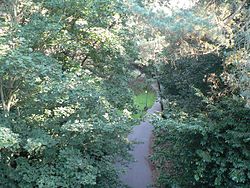 The subarea known as Alum Chine provides a pathway to the beach, and is crossed by a pedestrian suspension bridge. Branksome Dene chine (a chine being the local name for a deep gorge caused by river erosion extending to the sea) is nearby and it was on a bridge across this chine (now gone) from which Winston Churchill fell when he was a child, breaking both legs and damaging his kidneys. Robert Louis Stevenson was Westbourne's most famous resident, who lived at 'Skerryvore' on the West Cliff between 1885 and 1887. While at this rather ordinary house he wrote Kidnapped and The Strange Case of Dr. Jekyll and Mr. Hyde, as well as part of Treasure Island while he was recovering from an illness. It is here that John Singer Sergeant painted R.L. Stevenson pacing his drawing room with his wife sitting nearby in 1885 and a novel of his life while residing in Westbourne (published in 1929 titled 'R.L.S and his Sine Qua Non') was written by Adelaide A. Boodle. There is small statue commemorating his work on the site of the house he lived in, which was destroyed in the Second World War. Florence Nightingale had an interest in Westbourne when in 1867 she was a prime mover in the building of the Herbert Home Hospital.

The singer Ray Dorset of Mungo Jerry lives in the area as does British boxer Steve Bendall.

There are many places to eat and drink in Westbourne, ranging from brand establishments such as Cafe Rouge to pubs such as the Porterhouse pub, which is owned by the local Ringwood Brewery and is the official headquarters of the WFA (Westbourne Friends Association).

As well as a good selection of independent restaurants and cafes, Westbourne also has a Starbucks, Costa Coffee, Subway and PizzaExpress. 2010 saw the opening of a Tesco Express which resides within a former Methodist Church.

The Taj Mahal restaurant was first opened by Major Harry Burnett in 1962, and was the first Indian restaurant in Bournemouth. Prior to that it had been a Chinese restaurant.

Westbourne has good bus links to both Bournemouth and Poole and the beach is a 15-minute walk away.