WCU is the largest of the 14 state universities of the Pennsylvania State System of Higher Education (PASSHE). [6] It is the most competitive college out of the 14 colleges within the PASSHE to be accepted into. West Chester was ranked 55th in the Master's Universities (North) category by U.S. News & World Report for 2019 and ranked 12th for Public Universities (North). [7] The university is accredited by the Middle States Association of Colleges and Schools (MSACS). MONEY Magazine named West Chester University a best college value university. [8] 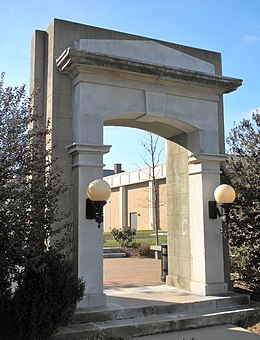 Entry to Old Main Building, reconstructed on High Street opening onto the Quadrangle

The university traces its roots to the private, state-aided school that existed from 1812 to 1869. As the state began to take increasing responsibility for public education, the academy was transformed into West Chester Normal School, still privately owned and state certified. The normal school admitted its first class, consisting of 160 students, on September 25, 1871. In 1913, West Chester became the first of the normal schools to be owned outright by the Commonwealth of Pennsylvania.

The campus quad located on North Campus appears on the National Register of Historic Places, and is called the West Chester State College Quadrangle Historic District, featuring WCU's historic buildings. The buildings, with the exception of Anderson Hall and Philips Memorial Building, were each built with local Chester County serpentine stone. They include Ruby Jones Hall, Recitation Hall and the Old Library. [9]

West Chester is recognized for its formal poetry program.[ citation needed] Its annual conference on form and narrative in poetry began in 1995 and is devoted to New Formalism. It has established a poetry center that sponsors readings and an annual book competition oriented toward formal poetry. It has also established Iris Spencer awards recognizing undergraduate achievement in formal poetry.

In April each year, students celebrate Banana Day [14], a unique annual event where the entire campus is full of a gorilla, Rammy, and others giving out bananas. Banana Day was conceptualized by WCU senior, Rodolfo P. Tellez, in 1996. Students take part in games similar to a field day to win Banana Day t-shirts, from push up competitions to banana eating contests.

The university participates in the National Student Exchange Program, in which students spend up to a year at any one of more than 170 member schools across the United States. Transfer of credit is a part of this program. [19]

The West Chester University "Incomparable" Golden Rams Marching Band, which has over 300 members, performs pre-game, halftime, or post-game at all home and select away WCU football games in Pennsylvania, New Jersey, and in Delaware. The band performs in parades and high school marching band competitions. The Golden Rams have performed in the Macy's Thanksgiving Day Parade, Philadelphia Thanksgiving Day parade, Miss America parade, Philadelphia Eagles games, Pittsburgh Steelers games, and the annual Collegiate Marching Band Festival in Allentown, Pennsylvania. In 1993, the band performed pregame for Game 3 of the World Series in Philadelphia. In 2009 and 2018, the band attended the Bands of America Grand National Championships in Indianapolis, an honor given to only two college bands in the United States each year. The IGRMB was awarded the 2019 Sudler Trophy by the John Philip Sousa Foundation. This is the first time in history that a Division II university received this honor.[ citation needed]

The athletic teams at West Chester University of Pennsylvania are named the Golden Rams. Students participate in NCAA Division II athletics in the PSAC and the ECAC. West Chester University has won national championships in women's basketball, women's lacrosse, women's swimming (the team was the DGWS champion in 1972), women's field hockey (including four AIAW titles from 1975–78), and men's soccer. West Chester won the first ever women's basketball national championship in 1969 and was on the losing end in the final game each of the following three years. [20] [21]

In 1961, the men's soccer team won the NCAA Division I Men's Soccer Championship. [22] Jerry Yeagley was a player on WCU's championship team before going on to win six NCAA Championships and six National Coach of the Year Awards as the men's soccer coach at Indiana University. In addition, prior to the NCAA instituting a tournament format to decide the champion in 1959, the Golden Rams were voted the National Soccer Champions in 1950 by the Intercollegiate Soccer Football Association. [23]

In 1977, 1979, and 1982 the boxing team won the National Collegiate Boxing Association national championship. In 1976, Edward Skalamera claimed the national title for his 147 lb. weight class while Joe Gery took the top position in the nation for his 180 lb. class. [24]

The WCU Men's and Women's swimming teams are noted for dominating the PSAC in recent years; the Men have not lost the conference title since 1998 and hold a total of 25 PSAC championships, the most out of any school in the conference. 2008 was a particularly successful year for the Men's team; finishing 3rd at NCAA's and fielding an 800-yard freestyle relay team that took the national title. The women's swim team has remained undefeated in the PSAC since 2007 and hold a combined total of 10 championships. West Chester graduate Jackie Borkowski ('10) competed in the 2012 Olympic trials in Omaha, Neb. in the 50m freestyle ultimately coming in 86th place. She won 3 individual national titles during her tenure with the Golden Rams.