Washington County is a county located in the U.S. state of Tennessee. As of the 2010 census, the population was 122,979. [2] Its county seat is Jonesborough. [3] The county's largest city and a regional educational, medical and commercial center is Johnson City. Washington County is Tennessee's oldest county, having been established in 1777 when the state was still part of North Carolina. [4]

Watauga and the Washington District

Washington County is rooted in the Watauga settlements, which were established in the early 1770s in the vicinity of what is now Elizabethton, in adjacent Carter County. At the outbreak of the Revolutionary War in 1776, the Wataugans organized the "Washington District," which was governed by a committee of safety. North Carolina initially refused to recognize the settlements as legal, but finally agreed to annex the district after the settlers thwarted an invasion by hostile Cherokees. The settlements were governed as the Washington District, which originally included all of what is now Tennessee. The district was reorganized as Washington County in 1777. [5]

From 1777 until 1784, North Carolina held nominal control over the county, but did little for the residents, at least in their eyes. So the area citizens formed, in 1784, the State of Franklin to meet their needs. Franklin was an early attempt to create a fourteenth state prior to Kentucky and Vermont's admissions into the union. The county reverted to North Carolina control, however, following the failure of the Franklin state government in 1788.

In 1790 the area became part of Southwest Territory, and afterward it was admitted to the Union in 1796 as the 16th state. [5] Jonesboro, the county seat of Washington County, is Tennessee's oldest town. With many buildings restored, it comprises one of the nation's most authentic historic districts of the period 1790–1870.

Washington County was divided between pro-Union and pro-secession sentiments at the outset of the Civil War. In Tennessee's Ordinance of Secession referendum on June 8, 1861, Washington Countians voted 1,445 to 1,022 in favor of remaining in the Union. [6] One of the bridges targeted by the East Tennessee bridge-burners in November 1861 was located in what is now Watauga near the Washington-Carter county line. [7] Landon Carter Haynes, a Confederate senator, hailed from Washington County. [5]

Johnson City, originally known as Johnson's Depot, was a major railway center for the southeastern states, connecting the region for freight transportation and passengers. It was the headquarters for both the standard-gauge Carolina, Clinchfield, and Ohio ( Clinchfield Railroad), which required the excavation and blasting of 17 tunnels during its construction; and the narrow-gauge East Tennessee and Western North Carolina Railroad (Tweetsie). Significant restoration is underway, as well as publicizing the railroad heritage of the Johnson's Depot Historic District. Other historic properties are being restored as representative of Johnson City's late nineteenth and early twentieth-century era as a railway center.

Rainbow and railroad tracks near Telford

According to the U.S. Census Bureau, the county has a total area of 330 square miles (850 km2), of which 326 square miles (840 km2) is land and 3.3 square miles (8.5 km2) (1.0%) is water. [8] The western portion of the county is situated in the Ridge-and-Valley Appalachians, which are characterized by long, narrow ridges roughly oriented northeast-to-southwest. The county's most prominent Ridge-and-Valley features rise in the vicinity of its northwestern border with Hawkins and Sullivan counties. The eastern portion of the county lies within the Blue Ridge Mountains, specifically the Bald Mountains (south of the Nolichucky River) and the Unaka Range (north of the Nolichucky). [9] Buffalo Mountain, a long ridge that straddles much of Washington's eastern boundary, contains the county's highest point, 3,520-foot (1,070 m) Pinnacle Knob. The Cherokee National Forest protects much of the extreme eastern part of the county. Sampson Mountain, which rises in the southeastern part of the county, is home to a designated national wilderness area. 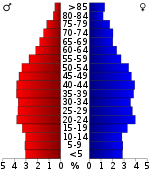 Chester Inn, one of many historic buildings in Jonesborough

Like most of East Tennessee, Washington County has always been a Republican stronghold. A Democratic candidate has never won the county in its history, though Lyndon Johnson came within 359 votes of Barry Goldwater in 1964 and Jimmy Carter came within 819 votes of Gerald Ford in 1976. Franklin Roosevelt is the only other Democrat to even cross the 40 percent mark. The only time the Republicans have ever lost the county came in 1912, when the Bull Moose Party won a plurality, with a badly divided GOP pushed into third place.