Voya Financial is an American financial, retirement, investment and insurance company based in New York City. Voya began as ING U.S., the United States operating subsidiary of ING Group, which was spun off in 2013 and established independent financial backing through an initial public offering. [3] In April 2014, the company rebranded itself as Voya Financial. [4] Voya's predecessors had first entered the U.S. market in the 1970s.

As of 2016, Voya served approximately 14.7 million customers with over $550 billion combined in assets under management ( AUM) and assets under administration (AUA). [2] 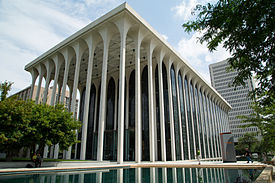 One of three Voya Financial buildings in Minneapolis

The company's main center for broker-dealer (the ING Financial Partners division) [3] and annuities businesses is located in Des Moines, Iowa. [5] This center was first established in 1997 and employed 400 as of late 2014. [3] [5] On July 31, 2017, Voya entered into an agreement with Cognizant to outsource a broad range of IT services, resulting in layoffs and jobs transferred to Cognizant. [6]