Voivodeship of Serbia and Banat of Temeschwar Information

From Wikipedia
https://en.wikipedia.org/wiki/Voivodeship_of_Serbia_and_Banat_of_Temeschwar Jump to search
A crownland of the Austrian Empire between 1849 and 1860 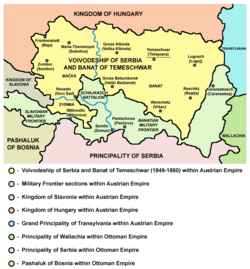 Map of the Voivodeship

It was a separate crownland named after two former provinces: Serbian Vojvodina and Banat of Temeswar. Its former area is now divided between Serbia, Romania and Hungary. The Voivodeship gave its name to the present Serbian Autonomous Province of Vojvodina.

In various sources (both, Serbian and German) there are two somewhat different variants of the name of the voivodeship, one could be translated into English as Voivodeship of Serbia and Temes Banat and another as Serbian Voivodeship and Temes Banat.

The Voivodeship was formed by a decision of the Austrian emperor in November 1849, after the Revolutions of 1848/1849. It was formed in accordance with privilege given to Serbs by the Habsburg emperor in 1691, recognizing the right of Serbs to territorial autonomy within the Habsburg Monarchy[ citation needed].

It consisted of the regions of Banat, Bačka and northern Syrmian municipalities of Ilok and Ruma. An Austrian governor seated in Temeschwar ruled the area, and the title of Voivode belonged to the emperor himself. The full title of the emperor was " Grand Voivod of the Voivodeship of Serbia" (German: Großwoiwode der Woiwodschaft Serbien). Even after the Voivodeship was abolished, the emperor kept this title until the end of Austro-Hungarian Monarchy in 1918.

The two official languages of the Voivodeship were German and "Illyrian" (what would come to be known as Serbo-Croatian).

The Voivodeship was ethnically very mixed, since the southern parts of Syrmia, Banat and Bačka with compact Serbian settlements were not included in it, while eastern Banat, with a Romanian majority was added to it.

The Palace and Cathedral of Serbian Orthodox Church eparchy in Timișoara, capital of the Voivodeship of Serbia and Banat of Temeschwar

According to the 1846 census, the territory that in 1849 formed the voivodeship included: [5]

According to the 1850/51 census, ethnic composition of the voivodeship was as follows: [6]

At first, Voivodeship was divided into two districts:

Later, it was divided into five districts: [9] 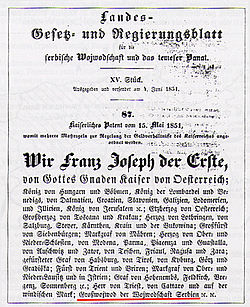 Titles of the Habsburg emperor in an historical document from 1851: among other titles, emperor Francis Joseph I was also great voivode of the Voivodeship of Serbia (German: Grosswojwod der Wojwodschaft Serbien).

Note: the voivodeship was abolished in 1860, but Francis Joseph kept the title of "Great Voivode" until his death in 1916, and the title was also inherited by the last Emperor of Austria, Charles I. [10]

VOIVODESHIP OF SERBIA AND BANAT OF TEMESCHWAR