The Violent Crime Control and Law Enforcement Act of 1994, H.R. 3355, Pub.L.  103–322 is an Act of Congress dealing with crime and law enforcement; it became law in 1994. It is the largest crime bill in the history of the United States and consisted of 356 pages that provided for 100,000 new police officers, $9.7 billion in funding for prisons and $6.1 billion in funding for prevention programs, which were designed with significant input from experienced police officers. [1] Sponsored by Representative Jack Brooks of Texas, the bill was originally written by Senator Joe Biden of Delaware and then was passed by Congress and signed into law by President Bill Clinton.

Following the 101 California Street shooting, the 1993 Waco Siege, and other high-profile instances of violent crime, the Act expanded federal law in several ways. One of the most noted sections was the Federal Assault Weapons Ban. Other parts of the Act provided for a greatly expanded federal death penalty, new classes of individuals banned from possessing firearms, and a variety of new crimes defined in statutes relating to immigration law, hate crimes, sex crimes, and gang-related crime. The bill also required states to establish registries for sexual offenders by September 1997.

Title XI-Firearms, Subtitle A-Assault Weapons, formally known as the Public Safety and Recreational Firearms Use Protection Act but commonly known as the Federal Assault Weapons Ban or the Semi-Automatic Firearms Ban, barred the manufacture of 19 specific semi-automatic firearms, classified as " assault weapons", as well as any semi-automatic rifle, pistol, or shotgun capable of accepting a detachable magazine that has two or more features considered characteristic of such weapons. The list of such features included telescoping or folding stocks, pistol grips, flash suppressors, grenade launchers, and bayonet lugs. [2]

The ban took effect September 13, 1994 and expired on September 13, 2004 by a sunset provision. Since the expiration date, there is no federal ban on the subject firearms or magazines capable of holding more than ten rounds of ammunition.

The 1995 Oklahoma City bombing occurred a few months after this law came into effect, and the Antiterrorism and Effective Death Penalty Act of 1996 was passed in response, which further increased the federal death penalty. In 2001, Timothy McVeigh was executed for the murder of eight federal law enforcement agents under that title.

Elimination of higher education for inmates

One of the more controversial provisions of the Violent Crime Control and Law Enforcement Act overturned a section of the Higher Education Act of 1965 permitting prison inmates to receive a Pell Grant for higher education while they were incarcerated. The amendment is as follows:

(8) No basic grant shall be awarded under this subpart to any individual who is incarcerated in any Federal or State penal institution. [4]

The VCCLEA effectively eliminated the ability of lower-income prison inmates to receive college educations during their term of imprisonment, thus ensuring the education level of most inmates remains unimproved over the period of their incarceration. [5]

There is growing advocacy for reinstating Pell Grant funding for all prisoners who would qualify despite their incarceration status. [6] Perhaps the most prominent statement has come from Donna F. Edwards along with several other members of the House of Representatives, who introduced the Restoring Education and Learning Act (REAL Act) in the spring of 2015. At the executive level, the Obama administration backed a program under development at the Department of Education to allow for a limited lifting of the ban for some prisoners, called the Second Chance Pell Pilot. [7] SpearIt has argued, "First, there are genuine penal and public benefits that derive from educating prisoners. Second, and perhaps more critically, revoking Pell funding fails to advance any of the stated purposes of punishment. In the decades since the VCCLEA's enactment, there is little indication that removing prisoners from Pell eligibility has produced tangible benefits; on the contrary, among other unfavorable outcomes, disqualifying prisoners may reduce public safety and exact severe social and financial costs." [8]

Title IV, the Violence Against Women Act (VAWA), allocated $1.6 billion to help prevent and investigate violence against women. VAWA was renewed in 2000, 2005, and 2013. This includes:

Part of VAWA was ruled unconstitutional by the Supreme Court in United States v. Morrison (2000).

Under Title XVII, [10] known as the Jacob Wetterling Crimes Against Children and Sexually Violent Offender Registration Act, guidelines were established for states to track sex offenders. [11] States had also been required to track sex offenders by confirming their place of residence annually for ten years after their release into the community or quarterly for the rest of their lives if the sex offender was convicted of a violent sex crime. [11] The Wetterling Act was later amended in 1996 with Megan's Law, which permanently required states to give public disclosure of sex offenders. [11] In 2006, the Wetterling Act's state registers was replaced with a federal register through the Adam Walsh Child Protection and Safety Act. [12]

Title II of the Violent Crime Control and Law Enforcement Act of 1994 provided incentive grants to build and expand correctional facilities to qualifying states that enforced mandatory sentencing of 85% of a person's sentence conviction. [15] [16] In 1998, twenty-seven states and the District of Columbia qualified for that Federal grant program. [15]

The Act authorized the initiation of " boot camps" for delinquent minors and allocated a substantial amount of money to build new prisons.

Fifty new federal offenses were added, including provisions making membership in gangs a crime. Some argued[ citation needed] that these provisions violated the guarantee of freedom of association in the Bill of Rights. The Act did incorporate elements of H.R. 50 "Federal Bureau of Investigation First Amendment Protection Act of 1993" (into §2339A (c)) to prohibit investigations based purely on protected First Amendment activity, but this was effectively removed in the Antiterrorism and Effective Death Penalty Act of 1996. [17]

The Act also generally prohibits individuals who have been convicted of a felony involving breach of trust from working in the business of insurance, unless they have received written consent from state regulators.

The Act also made drug testing mandatory for those serving on federal supervised release.

The Act prohibits "any person acting on behalf of a governmental authority, to engage in a pattern or practice ... that deprives persons of rights, privileges, or immunities secured or protected by the Constitution or laws of the United States." (Title XXI, Subtitle D.) Subtitle D further requires the United States Department of Justice to issue an annual report on "the use of excessive force by law enforcement officers." Such reports have not been issued, however. [18]

The Act expanded the scope of required FBI data to include hate crimes based on disability, and the FBI began collecting data on disability bias crimes on January 1, 1997. [20] 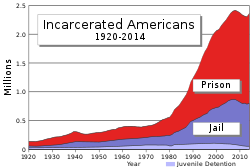 The Act contributed to the mass incarceration and prison overcrowding. The legal system relied on plea bargains to minimize the increased case load. [21] [22] Jerry Brown and Bill Clinton later expressed regret over the portions of the measure that led to increased prison population like the three strikes provision. [19] [23] Nevertheless, it has been acknowledged that the COPS Office had at least a modest impact in maintaining a long period of reduction in crime that had begun in 1992, [14] but the primary reasons for this reduction remain a topic of debate. [14]

As a result of the aforementioned increase in incarceration, a disproportionate amount of minorities ended up within the American prison system. [24] [25]